The increasing demand for lightweight, low cost, and mechanically robust solar-to-fuel electrochemical energy conversion devices motivates development of integrated semiconductor-polymer systems. [1, 2] One promising design for flexible photovoltaic [3, 4] or solar fuel generating [5, 6] devices employs arrays of Si microwires embedded in a polymer matrix that serves as a mechanical support, an electronic contact, and/or an ion conducting and fuel-separating membrane. Chemical and mechanical stability of the Si-polymer interface is critical for maintaining high junction quality and electronic/mechanical contact during sustained device operation. However, quantitative performance metrics and design methodologies for tailoring robust interfaces are needed. Previously, we demonstrated that single-wire in-situ mechanical pull-out tests can be used to measure interfacial shear strength between Si microwires with systematically varied surface functionalities and a polydimethylsiloxane (PDMS) matrix. The interfacial shear stress was found to correlate with the chemical bond strength resulting from covalent (-H, mixed –CH3/butenyl) or van der Waals (-CH3, octadecyl) bonds with PDMS. This revealed that macroscopic mechanical properties of the Si/polymer composite can be tailored by tuning Si surface chemistry.

Si microwire arrays (Fig. 1a) were functionalized with electrostatically charged end groups (-COO- and NH3+) to target directed bonding with ionic sites in conducting polymers such as Nafion, which have relevance as membranes in solar water-splitting devices. Negatively-charged surfaces were introduced via functionalization with decanoic acid (CH3(CH2)8COOH, Fig. 1b) by a UV-initiated hydrosilylation reaction on a Si-H terminated surface in 10% decanoic / 90% toluene. FTIR spectroscopy on a planar Si(111) wafer indicated the disappearance of Si-H stretches after hydrosilyation and the appearance of characteristic C-H, C=O and C-O-H vibrational modes (Fig. 2a) indicative of successful attachment of surface groups in the desired orientation with –COOH ends exposed, as further confirmed by XPS in the C 1s region (Fig. 2b). Amine-functionalized Si microwire surfaces were also developed to introduce positive charges onto Si surfaces when protonated in acid. Functionalized microwire arrays were embedded into a Nafion membrane by spin casting of a Nafion-DMF solution. Wire-polymer arrays were then removed from the substrate and mounted on an SEM stub for nanomechanical testing. Specimens for single-wire pull-out tests were prepared using a focused ion beam (FIB) to carve a “dog-bone” shape into the tops of wires (Fig. 1a inset), and were then manipulated by a diamond grip attached to a nanomechanical testing arm within an in-situ SEM setup (Fig. 1c-d). Wire pull-out (tensile) tests were used to measure the maximum interfacial shear strength at the Si microwire-polymer interface prior to debonding of the wire and release from the matrix, and the strength of electrostatic (attractive and repulsive) interactions assembled under a range of pH conditions was measured. Si-H and Si-CH3 surface interaction strengths with Nafion were also studied and compared with prior results in PDMS. We also discuss the role of these molecular surfaces as junctions in electrochemical devices, including their surface chemical and electrochemical stability during operation.

Fig. 2: (a) Transmission FTIR spectroscopy and (b) XPS C 1s high-resolution spectra from a 3-hour decanoic acid-functionalized Si(111) wafer. FTIR data in (a) are referenced to a Si-H background. 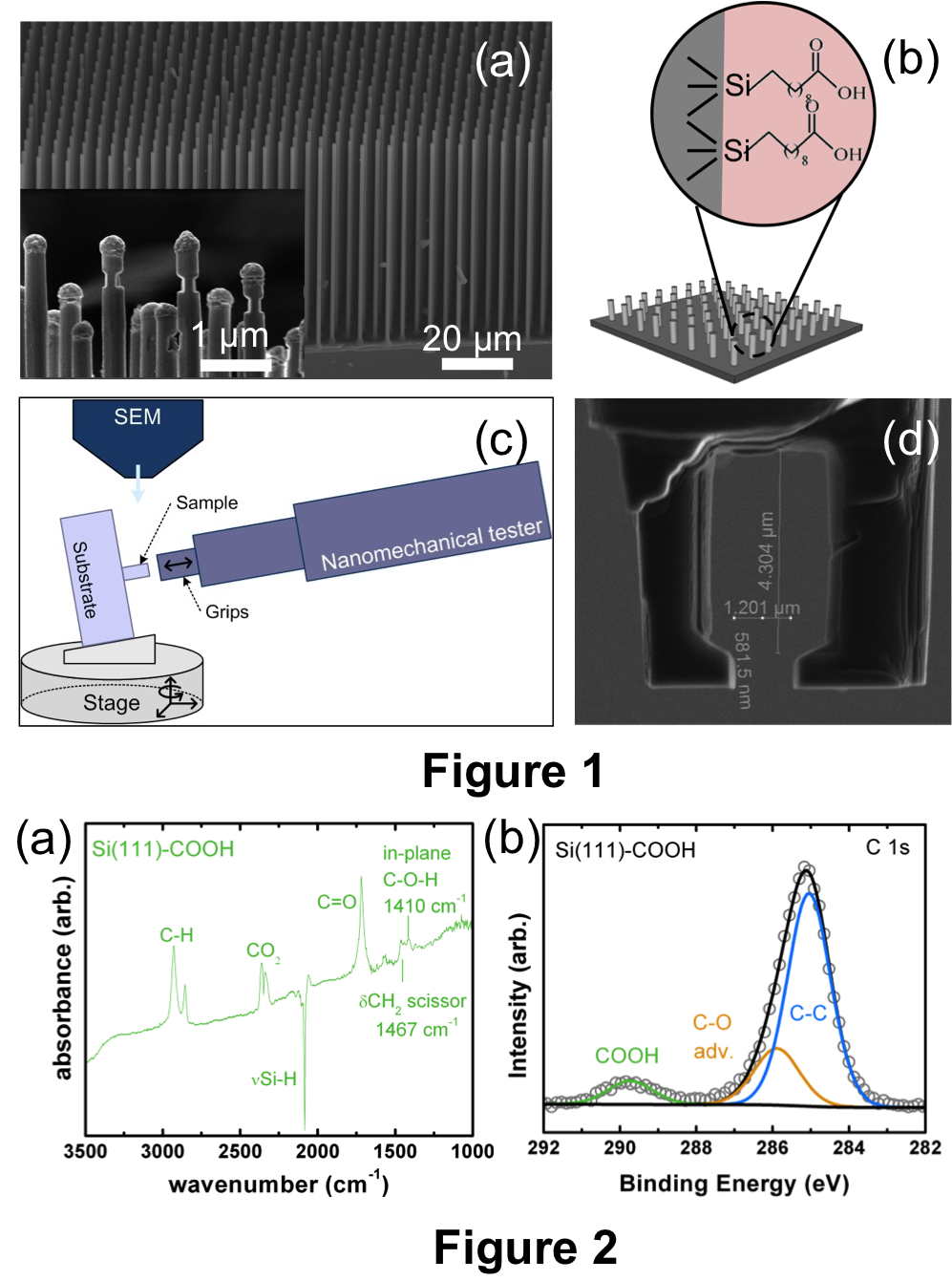