Coin cells and Swagelok cells are typically used for two and three electrode electrochemical testing of metal ion battery materials. Commercial three electrode laboratory cells are also available, but are typically expensive and often use elastomeric seals, which react with electrolyte and are not compatible with high temperatures.

The use of traditional 2325 coin cell hardware at high temperature applications is limited by the 60°C softening temperature of the cell gasket.  At 60°C, the pressure generated by highly volatile solvents can cause the cell to rupture. This is especially troublesome for Mg battery research where volatile solvents are generally used and high temperatures are needed for better intercalation kinetics.  Two and three electrode Swagelok cells are more difficult to prepare than standard coin cells.  They typically use PTFE ferrules, and care must be taken as PTFE is reactive with electrolyte at low potentials.

Here we describe cell hardware based on Conflat vacuum fittings. Typically Conflat vacuum fittings use copper or Viton gaskets.  These can either cause a short circuit between two Conflat fittings or react with electrolyte.  We have found gasket materials made from stable polymers form effective insulating, electrolyte resistant and high temperature seals in laboratory test cells.

Figure 1 shows the cycling performance of a LiFePO4 (LFP) vs Li two electrode Conflat cell using 1M LiTFSI in PC at 30oC.  It shows no capacity fade and identical performance as coin cells.

Figure 2 shows the cycling of a two electrode Li4Ti5O12 (LTO)/Li Conflat cell tested at high temperatures. No capacity fade was detected below 110oC. As the temperature is increased, reactions with the electrolyte caused the capacity to fade due to increased impedance from electrolyte decomposition reactions.

Figure 3 shows the cycling performance of a Mo6S8/Mg/Mg three electrode Conflat cell containing a highly volatile tetrahydrofuran (THF) based electrolyte at 60°C. We have found that three electrode cells using such volatile electrolytes at this temperature are extremely unreliable and difficult to make using coin cell hardware. The conflat cell, on the other hand cycled reversibly, during which time the voltages of the Mg counter and Mo6S8working electrode were accurately measured without electrolyte polarization using the third electrode.

Conflat cells are excellent low cost cell hardware that use readily available parts.  They are simple to assemble can be made into two and three electrode cell configurations and particularly useful for high temperature studies. We consider Conflat cells an excellent alternative to coin and Swagelok cell hardware especially in Mg battery research where the electrolyte is volatile and moderately high temperatures are used.

Three electrode measurements at high temperature of Li and Mg battery materials and further details regarding Conflat cell design will be discussed. 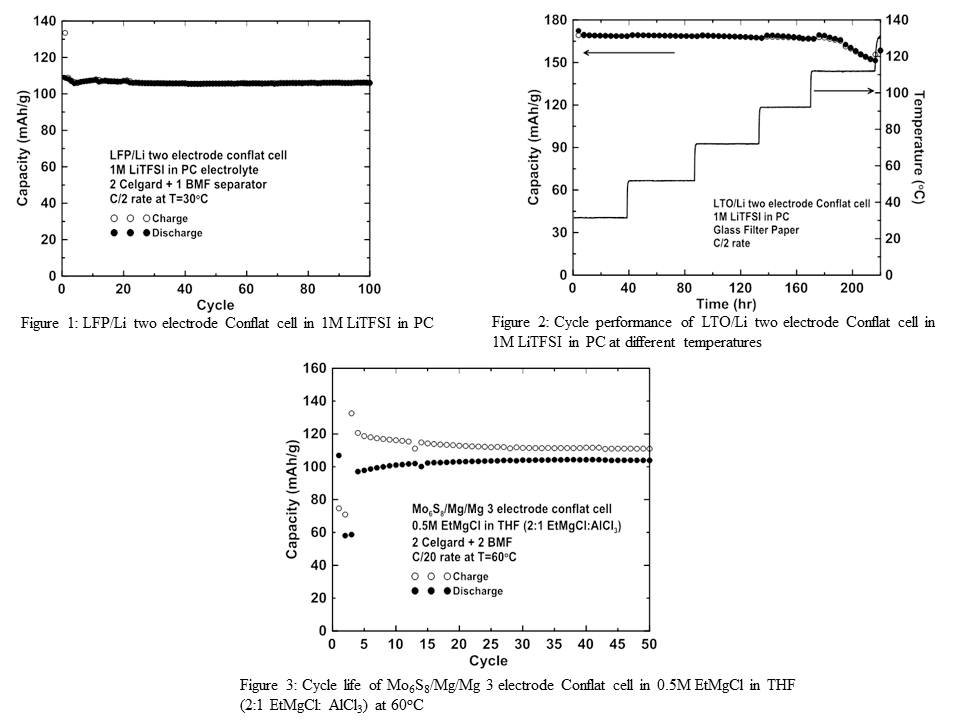