Sunrise, 2nd Floor, Jupiter 3 & 5 (Moon Palace Resort)
B. Rasimick, A. Stocks (Giner Inc.), and H. Xu (Giner, Inc.)
Hydrogen production from proton exchange membrane (PEM) water electrolysis is attractive due to its simple and clean nature.  However, the technology is expensive due to high materials cost for the catalysts, membrane, and bipolar plate. In most commercial processes, iridium (Ir) black is used as an oxygen evolution catalyst at the anode. A high Ir loading (>2mg/cm2) has to be used due to significant anode over-potential loss caused by sluggish kinetics of the oxygen evolution reaction.

The objective of this work is to develop advanced Ir catalysts with enhanced catalytic activity that may lead to decreased Ir loading and/or increased energy efficiency. Two categories of catalysts are being investigated. One is iridium nanotube catalyst, which is synthesized via a   porous alumina template.1 The template can be a commercially available anodized alumina membrane with a relatively uniform capillary pore structure.  The template was coated with an iridium precursor by subliming iridium precursor at an appropriate temperature. The precursor was then reduced to iridium. The template support was removed by etching with 10% potassium hydroxide. A cross-section of the nanotubes produced by this process is shown in Figure 1. The average length of the Ir nanotubes is 5um and the diameter ranges from 250 – 400 nm with a wall thickness of ≤50 nm. Energy-dispersive X-ray analysis suggests that the tubes are composed of iridium dioxide. The template pore size and process conditions are being varied to change the dimension of the Ir nanotubes.

In addition to Ir nanotubes, Ir catalysts dispersed on a variety of corrosion-resistant substrates like titanium oxide and indium tin oxide (ITO) are also being developed. The Ir dispersion on these supports may reduce Ir particle size thus potentially enhancing its catalytic activity.  Figure 2 shows the TEM image of Ir particles supported on TiO2nanowires with 30 w.t. % Ir loading.

The RDE performance and the electrolyzer performance of these catalysts are being investigated and their comparison with commercial Ir black will be reported.

Acknowledgement: The financial support is from the Department of Energy under the Contract Grant DE- DE-SC0007471. TEM was performed by Drs. Fan Gao and Zhiyong Gu at University of Massachusetts at Lowell. 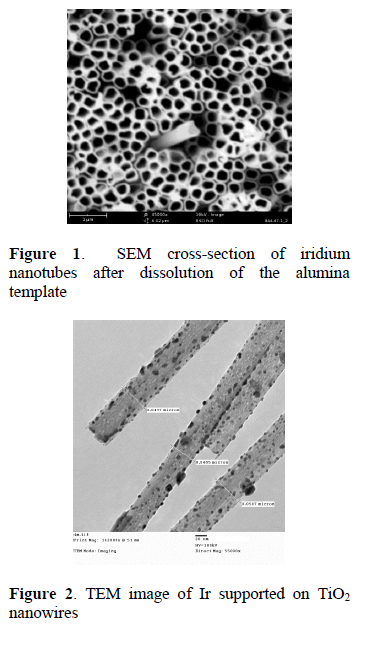