Expo Center, 1st Floor, Universal 21 & 22 (Moon Palace Resort)
E. J. Podlaha-Murphy, S. Sun, and K. Ziemer (Northeastern University)
Electrodeposition of iron-group transition metals (i.e. Ni, Co and Fe) with W and/or Mo additions can generate a variety of interesting magnetic materials, where the amount of Mo and W, and the ensuing structure, can affect coercivity. 1-4  They are also of interest for their corrosion resistance,5,6 as they readily form a protective oxide on their surface with air. These alloys  are typically electrodeposited from ammonia containing electrolytes.5-7 Elimination of ammonium species results in a more environmentally, friendly electrolyte, generally contains higher amounts of the reluctant metal, (W and/or Mo), but at a lower current efficiency. The deposition behavior is also of interest because of the coupled reduction nature. Without the presence of a suitable inducing agent, such as nickel ions, both tungstate and molybdate ions cannot be reduced to a zero valence state. However, with the inducing element, both the inducing and reluctant elements deposit together, so that it is not possible to deposit only Mo or W from aqueous electrolytes, a behavior termed induced codeposition.8 Here, a combination of Ni, Mo, and W ions in the same electrolyte has been used to electrodeposit Ni-Mo-W alloys, from ammonia free electrolytes, and are compared to Ni-W and Ni-Mo deposits under the same conditions. X-ray fluorescence (XRF) was used to characterize the elemental composition. Our work is the first demonstration of Ni-Mo-W alloys electrodeposited from an ammonia-free electrolyte.9

There are several mechanistic approaches used to describe induced codeposition of both Mo and W alloys, including our own work that assumes a mixed-metal intermediate adsorbed at the electrode surface.9 Since this intermediate is expected to be a partially reduced oxide species, it may be photoactive. If so, then the intermediate can be detected with modulated light techniques, such as intensity modulated photocurrent spectroscopy, IMPS, with an ac modulation of UV light. IMPS is more commonly used in semiconducting materials at an electrolyte interface,10and a simple impedance model that includes recombination and photocurrent used in reaction is adopted to interpret the results generated during codeposition. Ammonium ion electrolytes that are conventionally used for the electrodeposition of W and Mo alloys complicate the IMPS analysis since it can adsorb UV light. Therefore, electrolytes without ammonia are presented, and Ni-W codeposition is used as a typical example.  Figure 1 shows an IMPS spectra during Ni-W deposition and confirms the presence of an adsorbed metal oxide intermediate.  Also , this work represents the first example of using IMPS during electrodeposition.

X-ray photoelectron spectroscopy (XPS) was used to characterize the oxidation state of the metal species ex situ.  XPS was conducted on Ni-W and Ni-Mo-W deposits fabricated from an equal molar tungstate and molybdate electrolyte with and without Auger gas etching. Before etching, no discernable Ni peaks were observed on the Ni-W surface, but both WO3 and W were detected. After a 30 s Auger gas etching, zero valence Ni and W were observed, as expected from the reduction of the nickel and W ions. On the Ni-Mo-W surface molybdenum is present in the following forms: Mo, MoO3 and MoO2, along with WO3and W. A small Ni 2p3/2 was also identified, indicating a small amount of Ni. After a 6 s and 30 s Auger gas etching, a part of the oxide layer was removed, including all the molybdenum oxides. In this region W oxides were still present. (Figure 2).  In sum, this result shows that the tungsten oxide develops a thicker film within the deposit than molybdenum oxides with the same deposition conditions.

We gratefully acknowledge the NSF for support of this work under grant # CHE- 0957448, and the AESF Foundation. 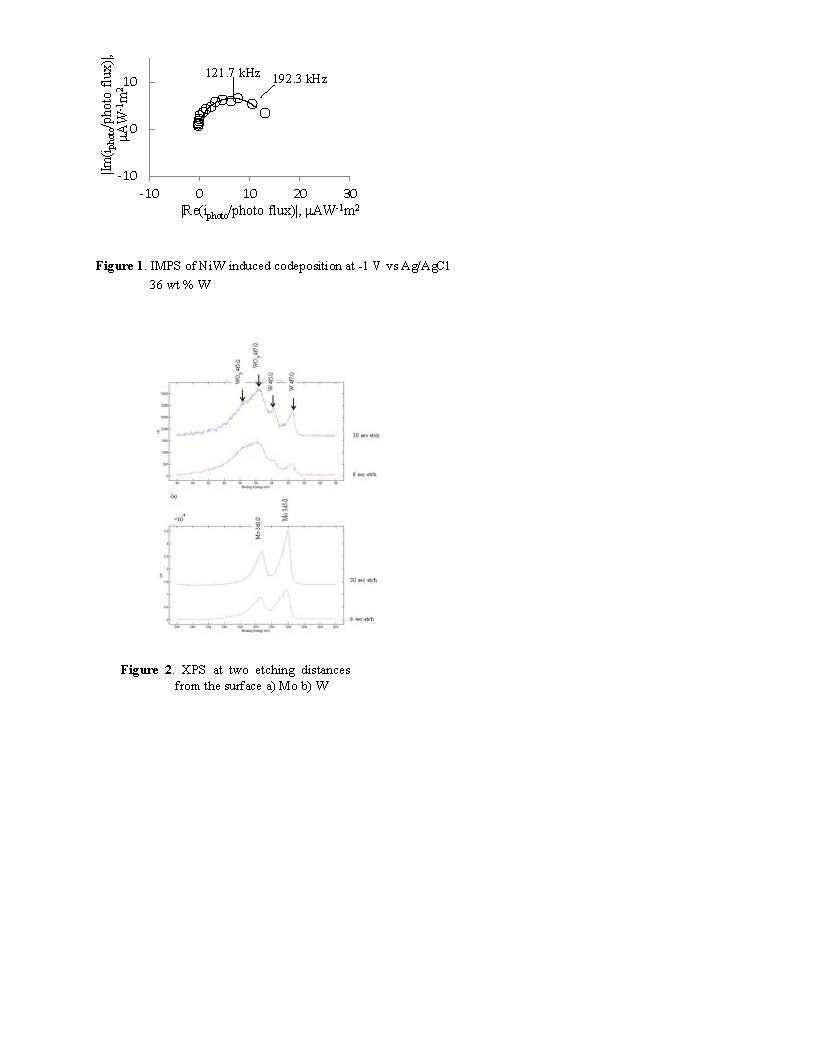