The state of the art for liquid electrolytes in a lithium-ion cell is typically a mixture of organic carbonates such as ethylene carbonate (EC) or dimethyl carbonate (DMC). The mixture ratio varies depending upon the desired cell properties. These solvents contain solvated lithium ions. The latter are provided by lithium salts, most commonly lithium hexafluorophosphate (LiPF6)[2]. Despite the high conductivity of these electrolytes (s >10-3 S·cm-1 at RT), important drawbacks are associated with the volatility and flammability of liquid solvents and the chemical instability of the LiPF6 salt. The latter undergoes hydrolysis in the presence of water traces, releasing fluoride anions. [3]

Ionic liquids (ILs) are salts with melting temperatures lower than 100°C. When they are liquid at room temperature, ILs are classified as room temperature ILs (RTILs). Some typical properties of ILs are: a) a low volatility, a high thermal stability and a negligible flammability; b) a high ion density and conductivity; c) a wide electrochemical stability window; and d) a simple synthesis, carried out by choosing the cation and anion which best comply with the requirements of the intended application. These features make ILs very suitable as solvents in electrolytes for Li batteries[4].

Recently, a class of solid-state single-ion conducting materials based on lithiated fluorinated-TiO2 (LiFT) was proposed, which demonstrated its applicability as a nanofiller to obtain nanocomposite polymer electrolytes [5,6]. LiFT consists of fluorinated anatase nanoparticles that are directly surface-functionalized with Li+ through an innovative one-step reaction with molten metallic lithium[7]. The conductivity of LiFT is due to Li+hopping processes between coordination sites present at the nanoparticle grain boundaries. These latter events take place in a very effective way.

The use of LiFT nanoparticles as the source of Li+ ions and ILs as the plasticizing agents allowed us to obtain innovative composite electrolytes for application in lithium batteries with a high thermal stability and conductivity. Indeed, the use of imidazolium ILs based on TFSI- and BF4- anions allowed us to investigate the different ability of these anions to coordinate and dissociate the Li+cations present on the surface of LiFT nanoparticles. For these reasons it has to be highlighted that no conventional Li salts are used in the electrolytes here proposed.

In this report, composite electrolytes based on LiFT nanopowder, 1-ethyl-3-methylimidazolium tetrafluoroborate (EMImBF4) and 1-ethyl-3-methylimidazolium bis(trifluoromethanesulfonyl)imide (EMImTFSI)  ILs are proposed. In details, LiFT nanopowder is doped with a known amount of both ILs to obtain two types of electrolytes with formula LiFT/EMImTFSI0.118 and LiFT/EMImBF4 0.200. The resulting electrolytes contain around 25% wt of ILs and show a powder-like consistence.

The correlation between structure, thermal properties and conductivity mechanisms of the resulting LiFT/EMImTFSI0.118 and LiFT/EMImBF4 0.200electrolytes is investigated by a variety of techniques: (a) FT-MIR and FIR at different temperatures; (b) Differential Scanning Calorimetry (DSC); (c) Thermogravimetric Analysis (TGA); and (d) Broadband Electrical Spectroscopy (BES). 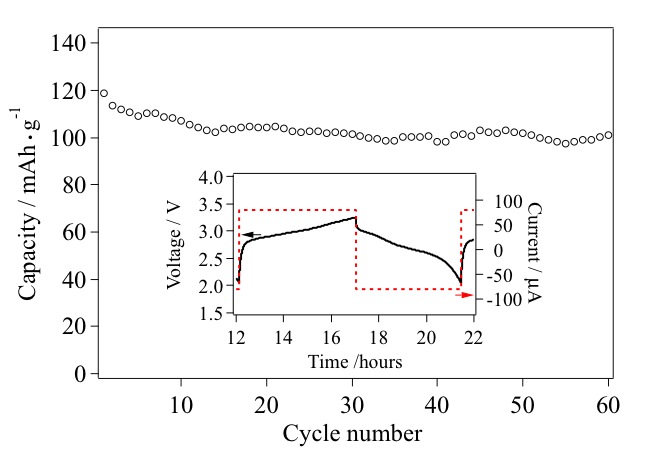