Sunrise, 2nd Floor, Star Ballroom 7 (Moon Palace Resort)
B. Adams, R. Black, Z. Williams, R. Fernandes, M. Cuisinier (University of Waterloo), E. J. Berg, P. Novák (Paul Scherrer Institute, Electrochemistry Laboratory), G. K. Murphy, and L. F. Nazar (University of Waterloo)
Li-O2 cells have been the subject of intense investigation in the last few years. The first step in the discharge reaction (oxygen reduction reaction or ORR) is thought to be a 1 e- process that forms the highly reactive intermediate superoxide, O2-/LiO2. This superoxide species is responsible for the decomposition of most common non-aqueous electrolyte solvents.1 Finding a stable electrolyte for the non-aqueous Li-O2battery is a significant challenge. While allowing conduction of lithium ions between the electrodes, the electrolyte must be stable to nucleophilic attack on discharge, to oxidative decomposition on charge, and inert to the negative electrode. No such solution has been reported to date, and the understanding of the properties that confer stability is lacking.

We will present a novel synthesized electrolyte, a chelate ionic liquid (IL), which is stable with respect to metallic lithium and also to superoxide-initiated attack. Figure 1a displays the 1H-NMR spectra of the by-products on cathodes discharged in the chelate IL as well as in the reference standard electrolyte, 1,2-dimethoxyethane (DME). Lithium formate (δ = 8.46 ppm) and dimethyl oxalate (δ = 3.92 ppm) are the two main proton-containing decomposition products formed from the DME molecule. These products are not observed for the new electrolyte.

Moreover, when employed in a Li-O2 battery, 8-fold less CO2 evolution occurs on charge than for DME. CO2 is known to evolve during charge of the battery due to the oxidation of lithium carbonates/carboxylates which are formed as side-products by decomposition of electrolytes on discharge.2 This is shown by the results of differential electrochemical mass spectrometry (DEMS) in Figure 1b.

Many other cell components besides the electrolyte suffer from instabilities in the non-aqueous Li-O2 battery, including binders and cathode materials.3,4 In particular, alternatives to carbon-based cathodes must be developed. By switching the positive electrode support to non-carbonaceous materials, cells utilizing the new chelate IL electrolyte have been cycled for over 300 hours with no capacity fading and little increase in polarization.5 In comparison, cells with the DME electrolyte, had a cycle life of less than 130 hours. This is displayed in Figure 2a and a comparison of the voltage profiles on the 10th cycle is shown in Figure 2b.

The current causes of electrolyte instabilities will be discussed as well as pathways toward the development of new electrolyte/electrode systems with enhanced stabilities. 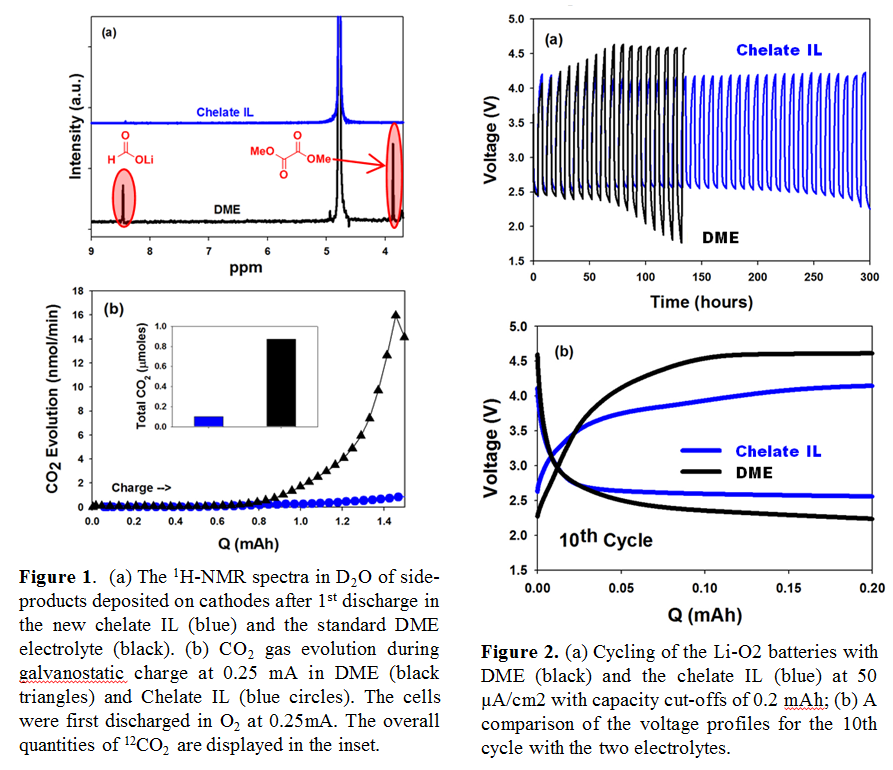