Sunrise, 2nd Floor, Star Ballroom 8 (Moon Palace Resort)
Y. Zhai (Hawaii Natural Energy Institute, University of Hawaii - Manoa), J. St-Pierre (University of Hawaii - Manoa), and J. Ge (Hawaii Natural Energy Institute, University of Hawaii - Manoa)
Air pollution is a challenge for the commercialization of proton exchange membrane fuel cells (PEMFCs) because exposure to pollutants has been shown to be detrimental to the performance and durability of the cell (1). Recently, 21 species were down selected from a list of more than 200 airborne pollutants for single cell evaluations (2). Results showed that contaminants differently affected cell performance. Acetonitrile and 6 other species were down selected for detailed studies. Acetonitrile adsorbs on the Pt/C catalyst surface, impacts the oxygen reduction reaction and causes a significant cell performance loss. Acetonitrile is also the only specie that affects the fuel cell membrane and ionomer proton conductivity. However, tests completed with a membrane conductivity cell did not show any impact of acetonitrile in an inert and saturated gaseous mixture. These results suggest the conductivity effect of acetonitrile in an operating PEMFC originate from conversion products.

The proton conductivity impact of acetonitrile was investigated by operating membrane/electrode assemblies (MEAs) with H2/N2 and H2/air in the absence and presence of acetonitrile in the cathode stream. Acetonitrile was injected at a concentration of 20 ppm for approximately 10 hours. The cell current was measured (chronoamperometry, CA) with two different potential control methods. For H2/N2, the N2 electrode potential was controlled with the H2 electrode acting as the reference electrode. During each test, before, during and after contamination, cyclic voltammograms (CV) were acquired to detect the presence of adsorbates or reactions on the Pt surface. For H2/air, the cell voltage was controlled. Acetonitrile conversion products were also analyzed by measuring cell inlet and outlet gas compositions by gas chromatography/mass spectrometry (GC/MS).

Figure 1 shows H2/air experiments. Before acetonitrile injection, as expected, the current was larger for lower cell voltages. The evolution of the open circuit voltage case (OCV) is also depicted. After the acetonitrile injection was initiated, the currents decreased by 71, 92 and ~100 % within approximately 10 hours for cell voltages of respectively 0.55, 0.65 and 0.85 V. For the OCV test, a 9 % decrease is observed in approximately 15 min followed by a steady state. These current and voltage decreases are partly due to acetonitrile adsorption on the Pt surface. Ohmic resistance changes also played a role with a contribution that increased with the cell potential, which is indicative of an acetonitrile oxidation product being absorbed by the membrane and ionomer. These results and membrane conductivity cell, CV and GC/MS data will be synthesized into a reaction mechanism.

This work is supported by the Department of Energy (DE-EE0000467) and the Office of Naval Research (N00014-11-1-0391). Authors are also grateful to the Hawaiian Electric Company for their ongoing support to the operations of the Hawaii Sustainable Energy Research Facility. 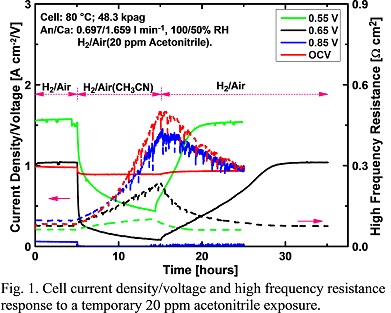