X-ray absorption spectroscopy (XAS) offers unique insights into electrode processes by providing simultaneous electronic and structural information on the electrode materials under actual in situ cell operating conditions. [3] Thus, the correlations between the superior activity and the durability of de-alloyed catalysts and the characterizations of the core-shell structure can be established by investigating catalyst morphology and composition from the extended x-ray absorption fine structure (EXAFS) region. The origin of the specific activity (SA) trends presented by the dealloyed PtNi3 catalysts during cycling is investigated by performing a systematic in situ XAS study on them at 3 different stages of life (after 200 (BOL), 10k (MOL) and 30k (EOL) cycles). In situ EXAFS analysis was employed to determine the bulk average Pt-Pt distance (RPtPt) to quantify the strain. The SA plots as a function of the RPtPt (lower x-axis) or the strain defined as the relative RPtPt contraction with reference to pure Pt (upper x-axis) is presented in Figure 1. For comparison purposes, the SAs of the Pt/HSC 30 wt% obtained following the similar cycling test conditions in PEMFCs [4] are included (cyan dots).  It is worth mentioning that the RPtPt determined by EXAFS closely matches the lattice parameter calculated based on Vegard’s Law using the Ni/Pt ratios obtained by EPMA. This clearly shows that the RPtPt in PtNi NPs is predominately controlled by the Ni content, and thus the attenuation of the strain during cycling is predominately determined by the M retention. Fig. 1 shows that the RPtPt increases with voltage cycling for all the samples, which evidences that the loss of the M during cycling attenuates the strain. As for porous PtNi3 NPs in which the Ni is poorly protected, they start with low Ni content and long RPtPt. After 30 k cycles, only trivial amount of Ni remains in the porous NPs, leaving behind essentially a Pt-like structure with the RPt-Pt close to that of pure Pt NPs (2.75 Å). On the other hand, the solid PtNi3 catalysts with low nanoporosity start with very high Ni content and short RPtPt owing to the mild Ni loss during dealloying process. After 30k cycles, they still contain a great deal of Ni, and the corresponding RPtPt(s) are shorter than that of pure Pt. Thus it is clear that the activity enhancement of the 30k-cycled solid PtN3 NPs over 30k-cycled pure Pt NPs are caused by the compressive-strain effects.

This research was supported by the Fuel Cell Technology Program of the Office of Energy Efficiency and Renewable Energy of the U.S. Department of Energy under contract DE-EE0000458. Use of the National Synchrotron Light Source (beamline X3B), Brookhaven National Laboratory was supported by the U.S. Department of Energy, Office of Science, Office of Basic Energy Sciences, under Contract No. DE-AC02-98CH10886.  This publication was made possible by the Center for Synchrotron Biosciences grant, P30-EB-009998, from the National Institute of Biomedical Imaging and Bioengineering (NBIB).  Support from beamline personnel Dr. Erik Farquhar and Mark Chance (X3B) are gratefully acknowledged. 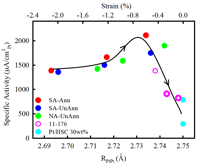