State-of-the-art NPMCs are typically synthesized via high-temperature treatment of highly heterogeneous precursors [1,3,4], which makes the understanding of the ORR active site formation a difficult task. Knowledge about the origin of the NPMC activity is imperative for the successful design of improved catalysts that could eventually replace Pt-based formulations. In this project, controlled functionality of NPMCs for ORR was attempted through an experimental investigation of graphene and graphene-oxide-based model systems, combined with advanced theory, modeling and simulation.

Model systems based on 2D structures, such as graphene and graphene-oxide (GO), are more homogeneous than typical NPMCs obtained using the high-temperature approach. In addition to well-defined morphology, such systems possess additional attractive properties, such as enhanced chemical stability and excellent conductivity. In the presented approach, successful incorporation of nitrogen heteroatoms into the graphitic structures of the starting precursors was obtained via ammonia treatment at varied temperatures (500°C-900°C). Efficient oxygen reduction with low H2O2 yield was achieved from model systems with low concentrations of Fe and Mn (less than 0.5%).

Density functional theory (DFT) and ab initio molecular dynamics were used to characterize the structural properties and activity of possible active sites in NPMCs [5]. The work focused on the active-site molecular configuration, surface accessibility, sensitivity to N and Fe chemical potentials, response to an aqueous environment, and adsorption of ORR intermediates. Structurally, particular attention was paid to the clustering tendencies of different N-coordinated Fe structures in order to illuminate the configuration of the FexNy centers thought to occur at graphene edges. It was found that, depending on the synthesis conditions dictating Fe and N chemical potentials, either 4N or 3N coordinated Fe structures should be the most stable Fe-containing defects studied thus far. The inter-edge Fe structures are considerably higher in energy than these defects and their existence is postulated to be thermodynamically prohibited. Clustered FeN3 structures (Fe2N5) seem to excel at cleaving the O2 bond with zero-barrier and thus are likely to follow a dissociative pathway for ORR. This pathway is possibly more selective, avoiding evolution of H2O2 but at the cost of overbinding ORR intermediates. Ligands attached to such sites lead to tuning of intermediate binding energies and can significantly improve calculated site ORR activity. Ab initio molecular dynamics simulations indicate that such ligands may form spontaneously on these under-coordinated sites through water dissociation and binding of *OH (Figure 1). Solvent does not appear to affect the stability of these edge defects otherwise. 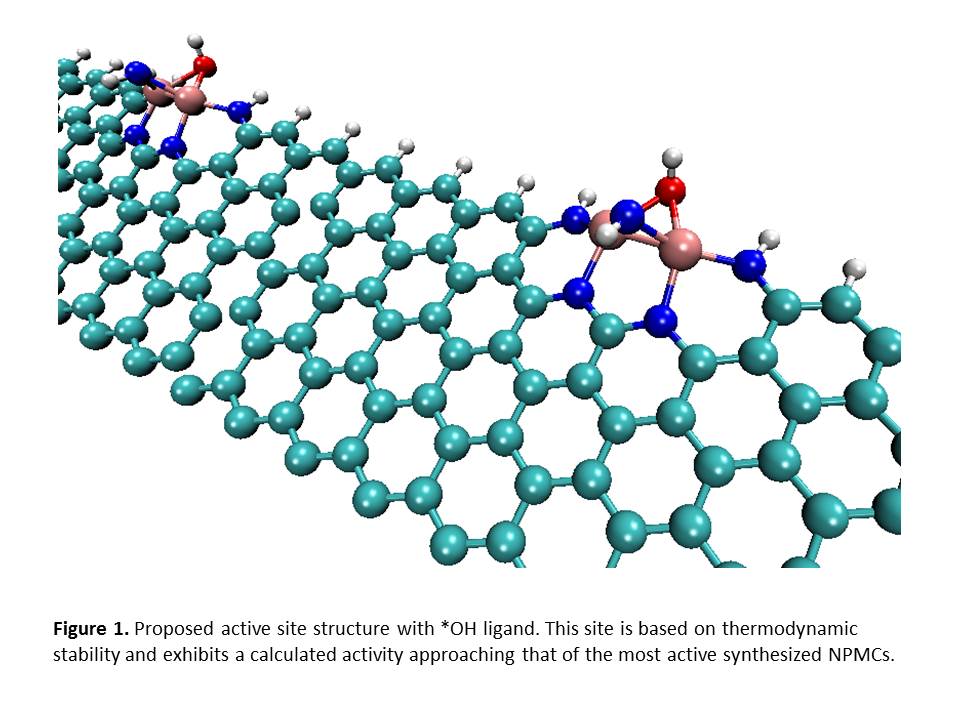