Sunrise, 2nd Floor, Jupiter 1 & 2 (Moon Palace Resort)
M. A. Uddin, J. Park, X. Wang, J. Qi, U. Pasaogullari, L. J. Bonville, and T. Molter (University of Connecticut)
Cationic impurities may get introduced into Polymer Electrolyte Fuel Cells (PEFC) from the ambient air (e.g. roadside contaminants) and from the corrosion of stack and balance of plant components. Recovery from cationic impurities is investigated by simulating the cationic contamination with equilibrium uptake of the membrane electrode assembly (MEA) in a salt solution. The cation uptake into the ionomer was performed by soaking the MEA in 0.9 mM CaSO4 and 29.1 mM H2SO4 solution following Kienitz’s procedure (1). Three different methods were used to soak the MEA into the solution to understand the role of the gas diffusion layers (GDL) (as shown in Figure 1): (A) entire CCM is exposed (50 cm2), (B) portion of the CCM is covered with GDL and the remainder is exposed, and (C) portion of the CCM is covered with GDL and the remainder is covered with PTFE seals used in cell assembly. Prior to soaking, all MEAs were tested to obtain baseline performance. In the first two methods (A and B), significant performance drop were observed due to Ca2+ presence inside the CCM (shown in Figure 2). In case of the third method (C), there were no significant performance changes. Even when the soaking time was increased to more than 4 times in method C compared to method A, cell performance did not change significantly. It is clear that GDL acts as a barrier to the transport of Ca2+ to the CCM. When surfactant was added to the cationic solution to increase the wettability of the GDL, a drop in the performance was observed.

To recover the cell performance, we re-protonated the CCMs in an acidic solution similar to Qi et al. (2). They re-protonated CCMs contaminated at different levels of Al3+ (similar to method A in Figure 1) with ex-situ soak in the acid solution (1 M H2SO4) and recovered the full performance decay. We also recovered the performance back near to the baseline when only the CCM is soaked (method A), but for the other two methods, the cell performance is partially recovered. We also performed in-situ injection of 1-10 mM H2SO4, and the cells were seemingly not affected by the in-situ injection of the acid solution. We conclude that the GDL is hindering the transport of Ca2+ in and as well as out of the MEA. Thus, recovery appears to be possible but additional factors need to be identified that hinder this process.

The authors are grateful for the financial support of the Department of Energy (DOE)-EERE, DE-EE00000467 (University of Hawaii, prime contractor, Jean St-Pierre, PI). 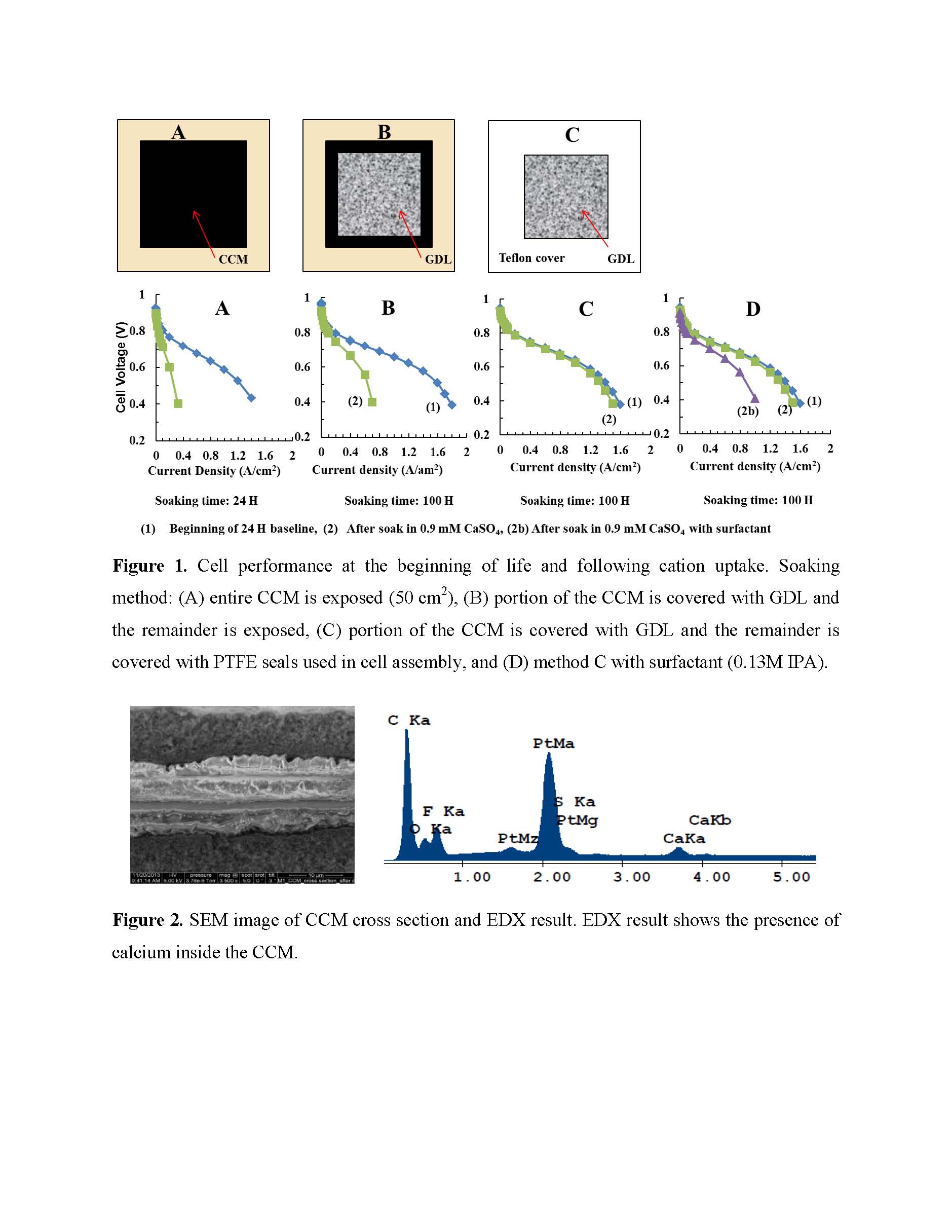