Sunrise, 2nd Floor, Galactic Ballroom 2 (Moon Palace Resort)
L. Downie (Dalhousie University) and J. Dahn (Dalhousie University - Dept. of Physics and Atmospheric Science)
Parasitic reactions that occur in lithium ion batteries are well known to result in cell failure [1], and therefore being able to measure and reduce these reactions is of utmost importance.  Isothermal microcalorimetry has been previously used to determine the relative contribution of parasitic heat flow between cells varying in electrolyte composition [2].  However, the absolute magnitude of the voltage-dependent parasitic heat flow for individual cells has not previously been determined.  Here, by varying the current over narrow voltage ranges, the relative contributions of each of the heat flow sources as a function of state of charge can be isolated.

When a current is applied to a cell there are three sources of heat flow [3]:  Joule heating due to polarization, changes in entropy, and parasitic reactions.  Polarization produces a non-reversible heat flow that is proportional to the square of the current, changes in entropy during intercalation and deintercalation produces a reversible heat flow that is proportional to the current, and parasitic reactions produce a heat flow that is thought to be independent of the current.  The relative effect of entropy, polarization, and parasitics can therefore be determined over small voltage ranges by varying the current.  The data can be fit using a simplistic model where each contribution is modeled with a simple function, typically linear, of the state of charge.  The fitting results then give the relative contributions of each term, with particular importance to the function associated with the parasitic heat flow for an individual cell, allowing for the extraction of the voltage-dependence of the parasitic heat flow for an individual cell.

Figure 1 shows an example of such an analysis for a 180 mAh machine-made high voltage-LiCoO2/graphite pouch cell with a 1 M LiPF6 in 3:7 EC:EMC electrolyte.  The heat flow was measured using a TA instruments TAM III isothermal calorimeter equipped with twelve microcalorimeters with an accuracy of < ±1 mW. There is an excellent agreement between the simplistic model and the experimental data, showing the ability of isothermal microcalorimetry to accurately extract the voltage-dependence of parasitic heat flow in individual cells.

This analysis is particularly useful for drawing conclusions about the behaviours of electrolyte additives across different cell chemistries where the method of relative differences in heat flow cannot be used.  Results will be presented for three different machine-made pouch cell chemistries:  high voltage-LiCoO2/graphite to 4.4 V, Li[Ni0.33Mn0.33Co0.33]O2 (NMC)/graphite  to 4.2 V, and NMC/graphite to 4.4 V.  The effect of a variety of different additives such as vinylene carbonate, methylene methanedisulfonate, ethylene sulfate, trimethylene sulfate, etc, will also be explored. 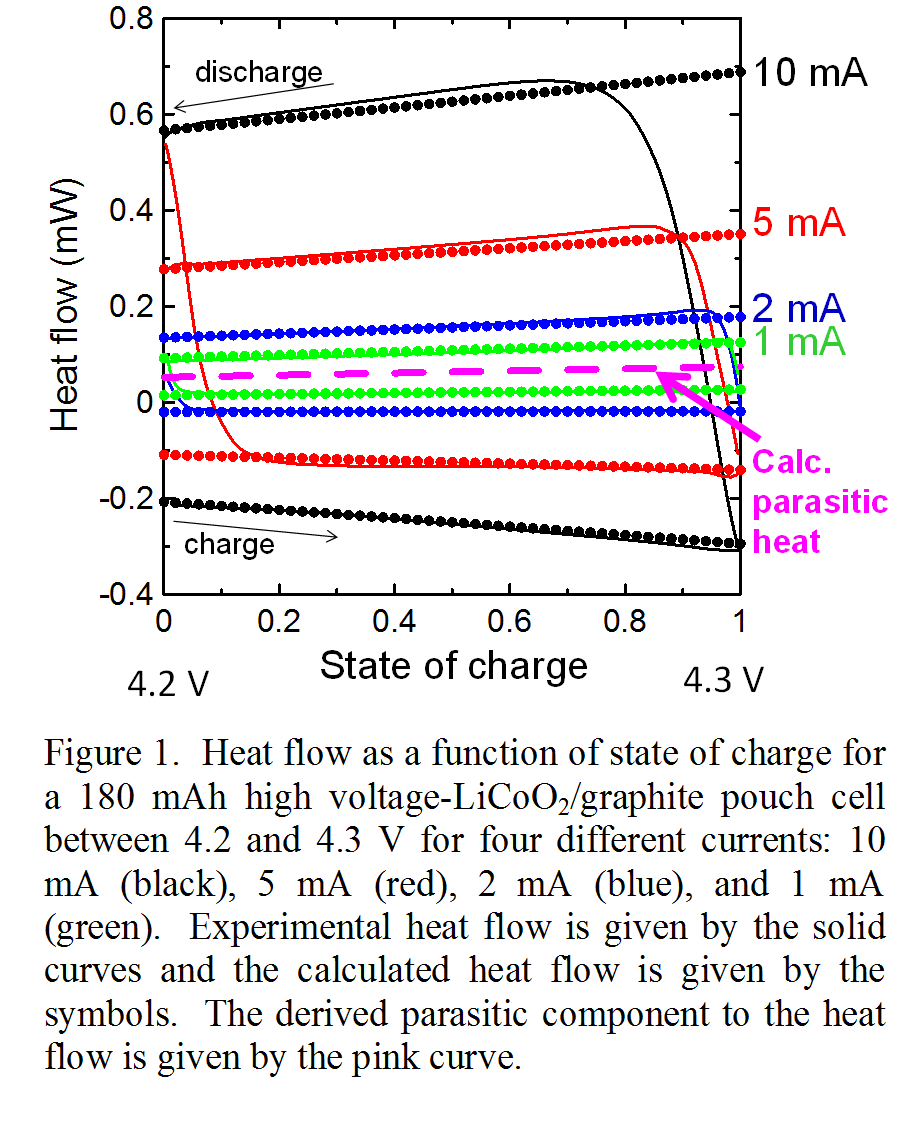