Sunrise, 2nd Floor, Galactic Ballroom 2 (Moon Palace Resort)
D. L. Smiley, M. Tessaro, and G. R. Goward (McMaster University)
Lithium ion batteries have long been promised as an alternative energy technology, owing to their high volumetric and gravimetric energy densities.1 The cathode (positive electrode) material is of particular importance as the choice of this component can dictate overall battery performance.  Polyanionic structural frameworks such as phosphates or fluorosulfates are an attractive alternative to the traditional layered oxide cathode structures due to their high electrochemical and thermal stability.2 More recently, the reconsideration of sodium ion batteries has become popular, and while the larger, heavier, sodium ion decreases overall energy density for a given material vs. Li, the cost and abundance benefits are expected to largely outweigh this disadvantage.3 Despite considerable research efforts to improve cathode materials for both lithium and sodium ion batteries, the role of structure on ion mobility is not yet fully understood; a property integral to electrochemical success.

Solid-state nuclear magnetic resonance (ssNMR) is a valuable tool for studying these polyanionic structures, as it is sensitive to both the mobile ion of interest (23Na or 6Li/7Li) as well as the surrounding structural framework (31P, 19F).  The fluorophosphate family of sodium cathode materials is extremely promising, as the materials are both thermally and electrochemically stable, with the advantage of being relatively inexpensive depending on the redox active transition metal of choice. In particular, the electrochemical performance of Na2MPO4F (M= Fe, Co, Ni, Mn) has been investigated in recent years, and is found to be an exemplary candidate for use in Na ion batteries.4 We have utilized 23Na NMR to gain understanding of the structural changes that occur during electrochemical extraction and reinsertion of Na ions during the charging and discharging processes of a number of fluorophosphate analogues. The paramagnetic nature of many of these materials makes their investigation by NMR non-trivial, requiring the use of fast magic-angle spinning (MAS) and low external magnetic fields.  In particular, the structural changes occurring upon desodiation of Na2FePO4F were investigated by NMR, where the attenuation of one of the two sites is attributed to the selective removal of Na ions from a single crystallographic position.  Additionally, by cycling Na2FePO4F versus a Li-metal counter electrode we observe evidence of substantial Na-Li ion exchange by 7Li NMR, opening the door for interesting heteronuclear correlation experiments with a hybrid Na/Li cathode material.

The movement of Li ions as a function of electrochemical cycling can also be tracked in Li cathode materials. Receiving significant attention is the fluorosulfate structure of the form LiFeSO4F, which benefits from a high redox potential and excellent electrochemical behaviour.5,6 6,7Li ssNMR was used here to identify any changes to the Li environment at various stages along the electrochemical charge/discharge cycle, providing valuable insight into the structural stability of this material.

Figure 1: 23Na 30 kHz MAS NMR spectra of pristine Na2FePO4F (red) and electrochemically generated Na1.5FePO4F (blue) demonstrating the decrease in intensity at site A during cycling as well as the formation of a novel site (#). 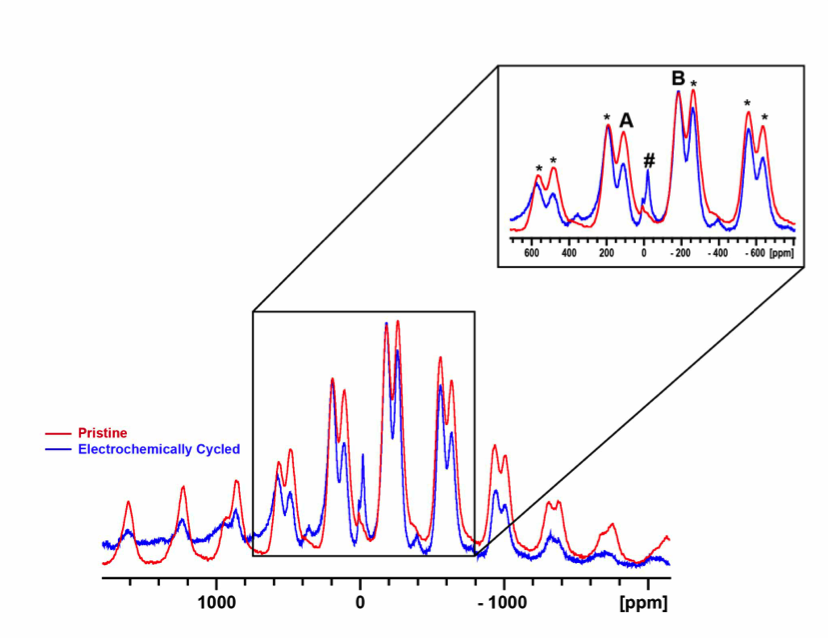