1095
Invited: Confinement Effects on the Structure and Transport of Nafion Ultrathin Films

Sunrise, 2nd Floor, Star Ballroom 5 (Moon Palace Resort)
C. M. Stafford (National Institute of Standards and Technology), K. Page (Materials Science and Engineering Division, NIST), E. M. Davis (National Institute of Standards and Technology), S. Kim (Materials Science and Engineering Division, NIST), J. Dura (Center for Neutron Research, NIST), K. Yager (Center for Functional Nanomaterials, Brookhaven National Laboratory), A. Kusoglu (Environmental Energy Technologies Division, Lawrence Berkeley National Laboratory), and C. L. Soles (National Institute of Standards and Technology)
Polymer electrolyte membrane (PEM)-based fuel cells are being aggressively targeted as an alternative energy source for transportation and stationary power due to  their high charge density and low operating temperatures. While the structure, transport and mechanical properties of bulk PEMs have been extensively studied, there is increasing interest on the behavior of these materials at interfaces and under confinement, since there exist many heterogeneous interfaces within an actual fuel cell assembly.  One could argue that the performance and ultimate failure of the membrane electrode assembly is greatly impacted by the structure and transport of ionomers confined to extremely small length-scales.

Using a combination of neutron and x-ray reflectivity, grazing-incidence small-angle x-ray scattering (GISAXS), quartz crystal microbalance (QCM), polarization-modulation infrared reflection-absorption spectroscopy (PM-IRRAS), as well as measurements capable of measuring thin-film mechanics we have studied the water transport and mechanical behavior as a function of humidity and initial film thickness (< 220 nm).  Our previous work has shown that when the polyelectrolyte is confined to thin films there is suppression in both swelling and water diffusivity in addition to considerable changes in the nano-scale structure.

More recently, we have developed methods to measure the mechanical properties of these systems, as well as extended our PM-IRRAS method to attempt to answer questions about the roles interfacial mass transport and polymer chain relaxations.  The mechanical methods reveal an effect of confinement on the measured stiffness of the material. Specifically, we observe an increase in the modulus with decreasing film thickness and, in the beginning of the hydration process, a visco-plastic response due to swelling.  These results lend some explanation to the observed decrease in water uptake with decreasing film thickness.

Moreover, we have extended our use of PM-IRRAS to include in-situ vapor switching between H2O and D2O. In this approach, we measure the time-resolved diffusion of H2O into the film (swelling), followed by the diffusive exchange of D2O for H2O (switch), and then then loss of H2O upon drying (deswelling).  The experiments enable us to (1) eliminate contributions of swelling and relaxation to the measured transport of water and (2) measure the transport in a pseudo-steady state manner.  This method shows promise in answering questions about the dominant mechanism for transport in confined thin films.

Collectively, our program aims to provide a comprehensive understanding of the effect of confinement on the structure and transport of ionomer-based materials, and how these effects manifest themselves in the performance and mechanical response of such membranes. 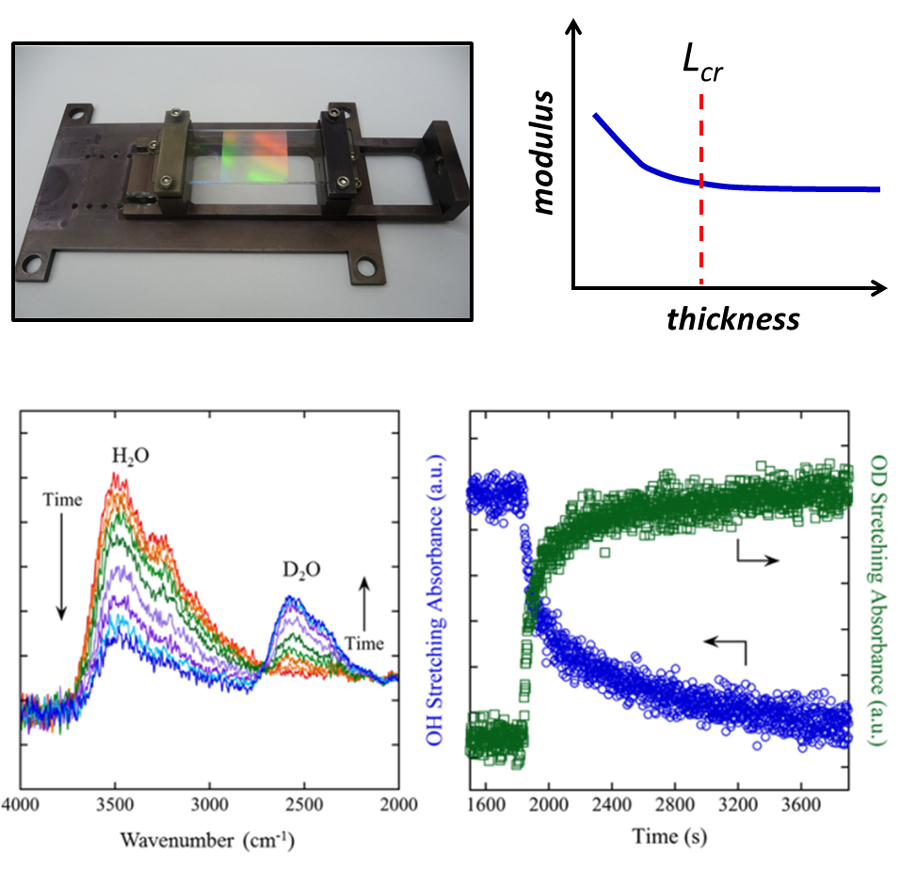