Expo Center, 2nd Floor, Gama Room (Moon Palace Resort)
R. Garcia, J. Villanueva, R. Escalante, B. Heredia (Cinvestav Unidad Mérida), and G. Oskam (Cinvestav-Mérida)
The development of new sources of energy that can be economically viable and environmentally friendly is, nowadays, one of the most important goals in scientific research. Dye Sensitized Solar Cells (DSSC) are photoelectrochemical systems that represent an interesting option in the development of new technology in the solar cells field. The analysis of this photolectrochemical system is necessary in order to understand the phenomena that take place into the solar cells, which is the basis to propose improvements for achieving high efficiency solar cells.

There exist several different parameters that directly influence the performance of the solar cells. However, in devising strategies to improve the performance of DSSCs, the effects of dark processes are often overlooked. One of these parameters is the exchange current density in the dark, Jo. The value of Jo is related to the rate constant of the recombination reaction, the film thickness, the order of reactions of electrons and oxidized redox species, and the concentrations of background electrons in the TiO2 and oxidized redox species in the electrolyte. It has been proposed from a theoretically analysis that this exchange current density is more relevant as the thickness of the semiconductor film is increased [1], following the relationship showed in Figure 1.

In this work we study the influence of thickness in different parameters of the cell, such as the short circuit density photocurrent, Jsc, open circuit photovoltage, Voc, the ideality factor, m, and the exchange current density in the dark, Jo. Electrochemical impedance spectroscopy (EIS) measurements were made in order to study the kinetic parameters of the cell. The results show that the exchange current density in the dark, Jo, is proportional to the semiconductor film thickness (Figure 1), as proposed theoretically [1], limiting the performance of the solar cells as the thickness of the semiconductor film is increased, resulting in an optimum thickness around 10 µm. In addition, the diffusion length measurements and collection efficiency values are in good agreement with an optimum film thickness around 10 µm [2]. 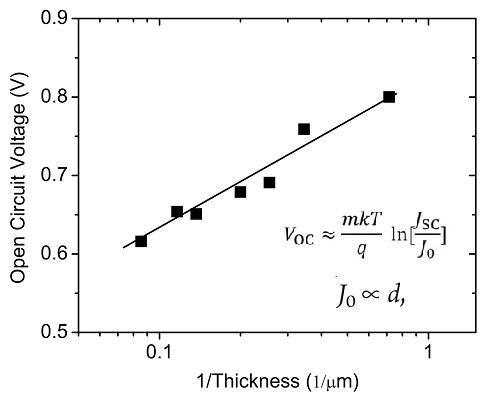