Typically Lithium-Ion batteries are charged using a constant-current-constant-voltage (CCCV) strategy that relies on voltage and current limitations set forth by battery manufacturers. More sophisticated strategies that focus on minimizing battery degradation have been proposed in the literature (1, 2). These methods rely on controlling harmful side reactions in a cell by using a descriptive physics-based battery model and optimal control theory.

The dynamic limitations obtained from models-based battery management schemes allow more efficient utilization of cells through providing more information on the state of the system. This additional information makes it possible to push the cells to their operational extremes without causing them much damage. Although the results obtained from these sophisticated models are very reliable, the enormous computational power required prevents their online implementation. In this work, we use a simplified cell model suitable for obtaining analytical optimization results.

We present the following problem: Neglecting the diffusion effects occurring inside a cell, the dynamics of the state of charge (SOC) are given by

where xis SOC. Assuming small over-potentials, the Butler-Volmer kinetics of the cell is linearized around the cell reference potential, which leads to Eq. 2.

The reference potential can be approximated as an affine function of the SOC in certain operating regimes,

Harmful side reactions such as SEI layer growth are modeled using the Tafel equation, which is of the form

Iside is assumed to be much smaller than Ibattery. The health-conscious charging problem can then be stated as the following dynamic optimization problem

which is subject to the dynamic constraint in Eq. 1. As shown in Eq. 5, we also penalize the deviation of x(T) from xf, the desired final SOC and β represents the relative cost of this deviation.

We solve this problem using the Pontryagin Minimum Principle (PMP). We define the Hamiltonian as

where λ  is a time varying Lagrange multiplier associated with the constraint in Eq. 1. Applying the PMP to this problem gives the following optimality conditions:

We obtain a closed-form solution for the optimal charging current trajectory by solving Eq. 7 and 1 together. Using this solution, the optimal trajectory can be studied under various conditions, as shown in Figs. 1 and 2. These trajectories represent a significant departure from CCCV cycling in terms of both its shape and the resulting degradation. This provides insight into the importance of health-conscious battery management and the ways in which cycle shapes affects cycle life.

Figure 1. Optimal SOC trajectories as a function of the final time.

Figure 2. Optimal SOC trajectories as a function of . 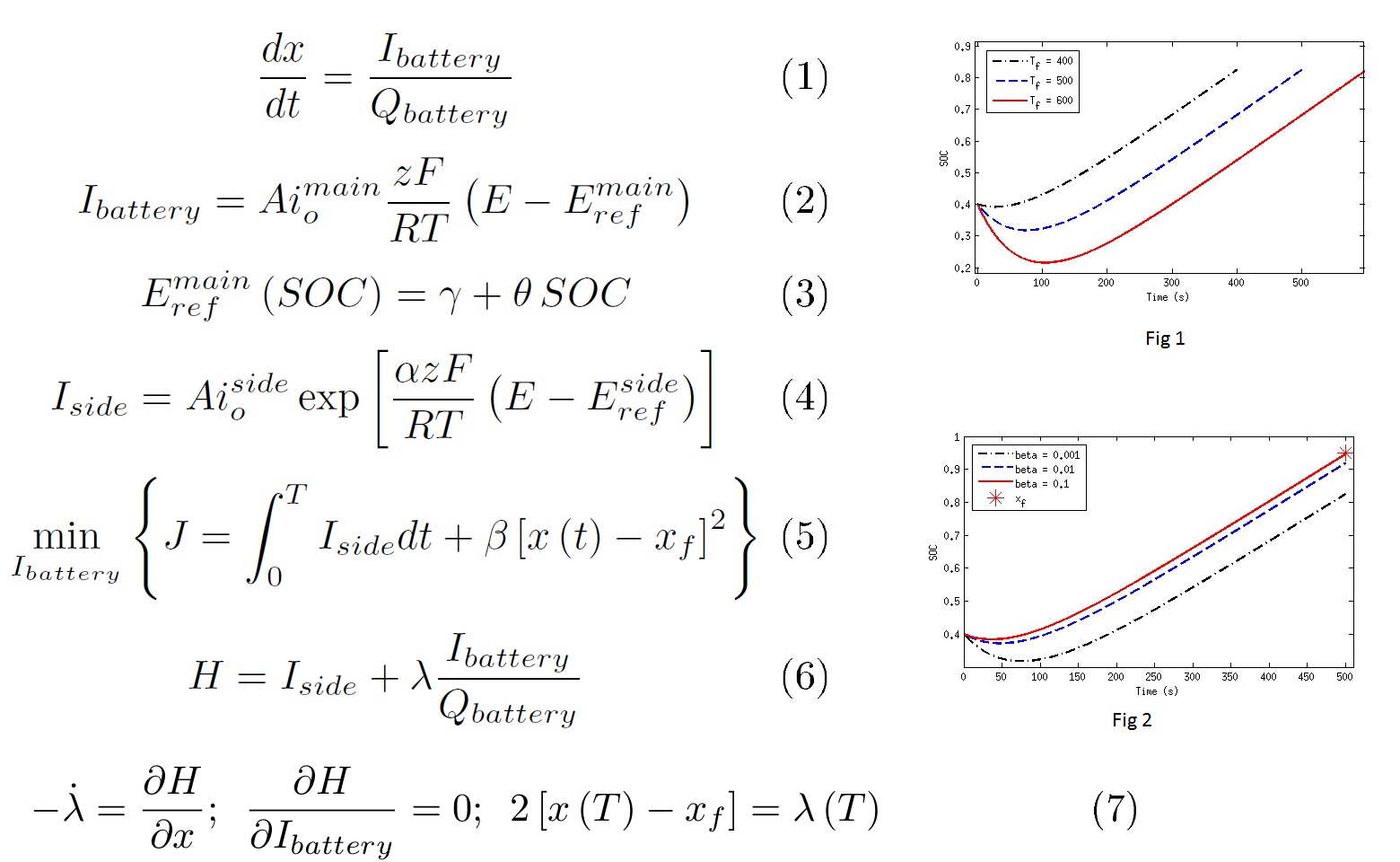