Sunrise, 2nd Floor, Jupiter 1 & 2 (Moon Palace Resort)
F. Colmati Jr. (Universidade Federal de Goiás), R. Sousa Jr. (Universidade Federal de Săo Carlos, Dep. Engenharia Química), E. G. Ciapina (UNESP-Campus de Guaratingueta), and E. R. Gonzalez (Instituto de Quimica de Sao Carlos, USP)
A previous work on Pt-Sn/C catalysts for ethanol oxidation (1) showed that a thermal treatment at moderate temperatures leads to a significant increase in activity. The best activity was observed for Pt3Sn1 thermally treated at 200 oC and ascribed to the formation of a  Pt3Sn1 phase, plus a cleaning effect of the thermal treatment. However, it is well known that electronic effects may be as important as geometric effects in bimetallic catalysts, and these were not evaluated in the Pt3Sn1 phase. Obtaining information on the electronic structure, particularly in the electrochemical environment is of importance.

Pt-Sn catalysts were synthesized by reduction of suitable precursors with formic acid following procedures already described (2). The composition of the catalysts was determined by EDX using a Zeiss Digital Scanning Microscope, with a micro analyzer Link Analytical QX 2000. High resolution diffractograms were obtained using Synchrotron radiation at the Brazilian Synchrotron Light Laboratory (LNLS). The electronic properties of the catalysts were probed by x-Ray absorption spectroscopy in the XANES region performed at the LNLS. All measurements were performed with the electrode containing the catalysts polarized at 300 mV vs. RHE. Gas diffusion fuel cell electrodes were built with two layers, a diffusion layer and a catalytic layer prepared as already described (1). The MEAS were prepared as described previously (3).

The EDX results show that the actual concentrations of the catalysts are very near the nominal values. The results in direct ethanol fuel cells (DEFC) show that the performance with as prepared Pt3Sn1 catalysts was much poorer than with Pt3Sn1 (E-TEK). The lattice parameter of both catalysts show that the E-TEK material is almost 100% alloy, and the difference in performance was attributed to this fact. In order to increase the degree of alloy of the as-prepared catalyst different portions were submitted to thermal treatment at different temperatures. Results showed that a thermal treatment at 200 oC did not alter the main properties of the catalyst, but higher temperatures led to the formation of agglomerates. As a consequence of this the results in DEFC showed that the as prepared catalyst treated at 200 oC showed better performance than the E-TEK catalyst. The degree of alloy in the thermally treated catalyst increased from 14 to 22% but it is still lower than in the E-TEK catalyst. The conclusion is that a good Pt-Sn catalyst requires a suitable degree of alloy between Pt an Sn and also the presence of non-alloyed Sn, which is probably in the form of oxide, that promotes the bifunctional effect.

Figure 1 presents the XAS results, mainly in the XANES region, for the as prepared and thermally treated Pt3Sn1catalysts, and also for a Pt foil used as reference. The analysis of white lines presented in Fig. 1 was performed using Shukla´s method (4) as described in detail in a

Figure 2 shows the fitted Lorentzian functions from which the integrated intensities were calculated: 529 for Pt foil, 553 for as prepared Pt3Sn1 and 523 for thermally treated Pt3Sn1, in arbitrary units. From these results it may be concluded that by increasing the degree of alloy of Sn and Pt the vacancies of the 5d band of Pt, responsible for the adsorption of poisons are reduced.

To FAPESP, CNPq and CAPES, Brazil for financial support. To the Brazilian Synchrotron Light Laboratory for assisting with the DRX and XAS experiments. 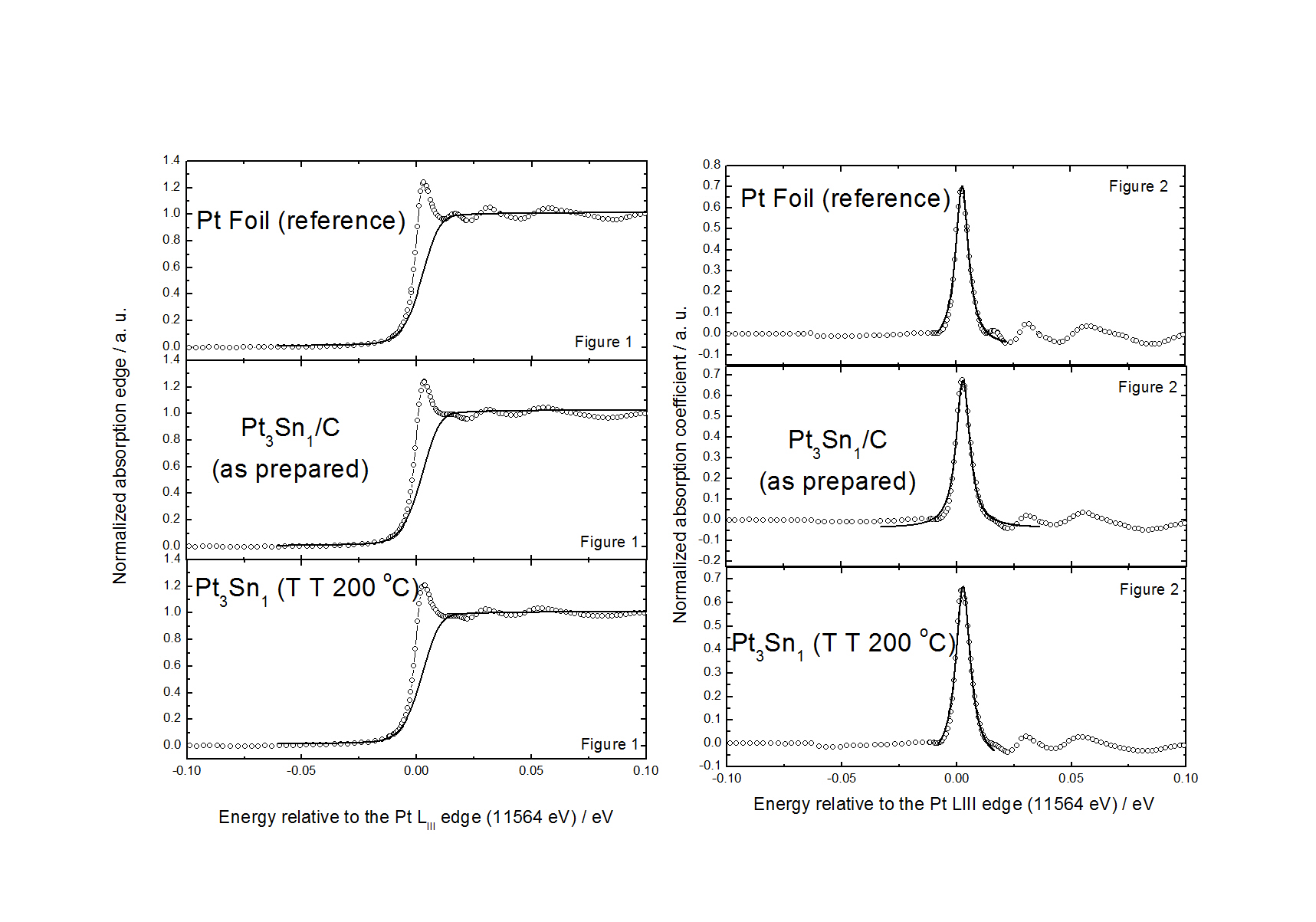