Sunrise, 2nd Floor, Star Ballroom 5 (Moon Palace Resort)
S. Shukla, K. Domican, and M. Secanell (University of Alberta)
Performance of a polymer electrolyte membrane (PEM) fuel cells depends upon several electrode parameters such as platinum loading, micro-structure and ionomer content. These parameters can be varied by changing the catalyst ink formulation and electrode fabrication technique [1]. In this work, inkjet printing is investigated as an electrode fabrication technology. Our results show that with this technique, it is possible to have an electrode thickness of less than 2 µm with an evenly distributed micro-structure and a platinum loading of around 25 µg/cm2 [2]. The platinum mass activity of these electrodes is seen to be up to 8 times higher that a conventionally fabricated electrode at high current densities, mainly due to the reduction in macro-scale transport losses due to the reduced thickness (Figure 1). Electrode current density at low overpotentials was improved with increasing Pt loading by increasing the number of deposited layers. However, this resulted in an increased electrode thickness which increased the mass-transport losses thereby reducing the platinum mass activity at high current densities.

It was hypothesized that patterning of electrodes would help reducing mass-transport losses at the macro-scale by having through-plane pathways for the reactant gases and water. It has also been shown that patterning of the electrodes influences the electrochemical active area of the cell [3]. This work studies the fabrication process of patterned electrodes and their performance when compared to a normal electrode. First, the resolution of our inkjet printer technology was studied. Various patterns were tested using two printer cartridges having drop volumes of 1 pL and 10 pL corresponding to a nozzle diameter of 9 µm and 21 µm respectively. It is shown that distinguishable patterns as small as 200 µm x 200 µm could be fabricated. The maximum resolution is shown to be a function of the nozzle diameter, substrate used, number of active nozzles during the fabrication process, droplet spacing, and number of printed layers. Figure 2 shows sample spacing resolutions between the patterns fabricated. Smaller nozzle size helps in increasing the pattern resolution. Minimum distinguishable spacing between the patterns was found to be 100 µm when using the 1 pL cartridge and 500 µm with the 10 pL cartridge. Figure 3 shows a performance comparison at 70% RH and a cell temperature of 80 C between two catalyst coated membranes with a 5 cm2 cathode layer obtained using: a) a patterned electrode, and b) a conventional electrode (15 layers). The estimated cathodic Pt loading for both the CCMs is approximately 0.175 mg/cm2. It can be seen that patterning significantly improves the cell performance at high current densities due to reduction in the mass-transport losses as there is lower resistance to the flow of gases through the electrode. This effect will be more prominent once the performance plots are obtained when using cathodic reactant gas with lower oxygen concentration. The effects of cell performance on the type of patterns and the substrate used for ink deposition is underway. 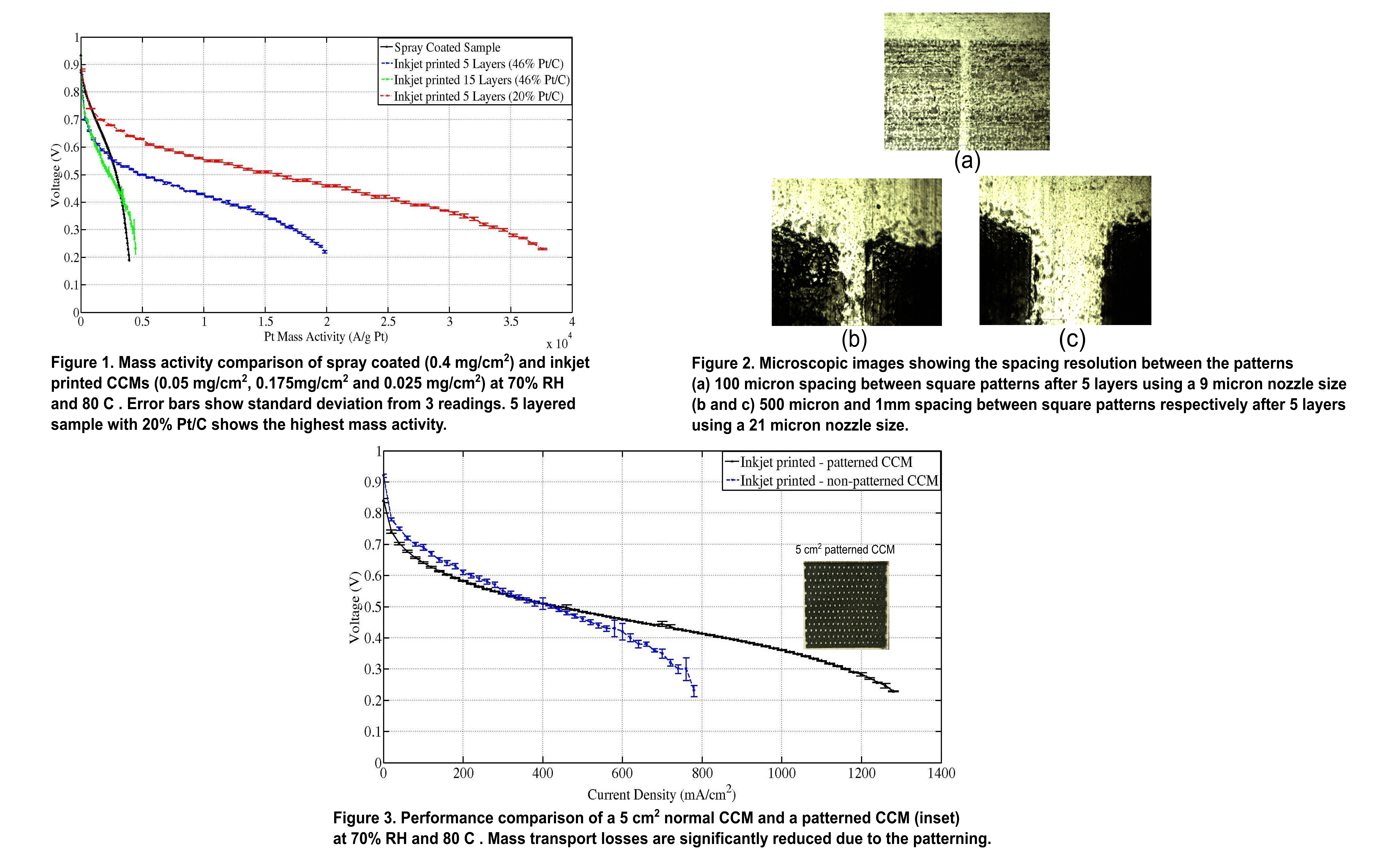