Sunrise, 2nd Floor, Galactic Ballroom 1 (Moon Palace Resort)
K. C. Smith, V. E. Brunini, Y. Dong, F. Fan, W. Woodford, A. Helal, G. McKinley, W. C. Carter, and Y. M. Chiang (Massachusetts Institute of Technology)
Flowable suspensions that conduct both electrons and ions can enable the use of energy-dense electroactive species in flow batteries (FBs).  Such devices have been demonstrated with suspensions containing solid-state Li-ion-storage compounds1,2 and solution/precipitation chemistries.3 In understanding and modeling the behavior of this class of FBs, the following unique properties must be considered: (1) electrochemical reactions can take place outside the boundaries of the stack when the suspension has mixed conductivity; (2) shunt currents can arise from both electronic and ionic conductivity; and (3) suspensions have flow resistance associated with non-Newtonian rheology.  Here, we quantify the magnitude of each of these effects and their impact on FB energy efficiency, and identify the design, operational, and materials paramters by which they can be controlled.

We measured and modeled the electroactive zone (EAZ) in which electrochemical reactions occur for the case of mixed conductors.  Typically the EAZ extends beyond the spatial extent of the current collectors, the extension being termed the side zone, SZ. Suspension-based FBs exhibit this behavior because ions and electrons can conduct out of the stack (Fig. 1b), while solution-based FBs do not (Fig. 1a). Electrochemical reactions in SZs are generally inefficient and can reduce the energy efficiency of the FB.  The added inefficiency can be avoided in practice by extending current-collector length and using electroactive materials with wide voltage plateaus.  For example, we show that EAZ extension contributes less than 1% additional energy inefficiency at C/10 rates for current collectors greater than 20 mm long when a nonaqueous Li4Ti5O12 suspension is used.

FBs have shunt currents between electrodes arranged in series in multilayer stacks due to the electrical connectivity of shared fluid pathways (Fig. 1).  Ionic and electronic shunt currents occur in parallel in mixed-conducting suspensions (Fig. 1b), and the net current is proportional to total conductivity (i.e., the sum of ionic and electronic conductivity). Scaling analysis shows that based on total conductivity, nonaqueous lithium-polysulfide suspensions should have only 1/25th the shunt losses of aqueous flow batteries.3  In the case of a lithium-polysulfide solution containing 1 vol. % Ketjen black, the resulting mixed-conductor has equal ionic and electronic conductivity of approximately 2 mS/cm.3  Such a mixed conductor with equal electronic and ionic transference number is ideal for FBs, because low cell impedance and minimal shunt currents are realized simultaneously.

Mixed-conducting suspensions exhibit shear-thinning rheology for which viscosity decreases monotonically with shear rate.1-3 At high shear rates, the above mentioned lithium-polysulfide suspensions has a viscosity (~700 mPa) that is nearly one-hundred fold higher than the solution counterpart (~20 mPa).3  However, the suspension-based FB does not require use of a porous current collector.  Thus, the mechanical loss upon pumping the high viscosity suspension through an unobstructed flow channel (e.g., ~1mm thick) is ~1000 times smaller than that to pump the solution through a carbon felt current collector with ~10 micron pores.3  In addition, the suspensions can lower their flow-resistance through wall slip, which further increases the electrochemical efficiency of FBs.4  Efforts to promote slip in FBs by using novel surface treatments and materials will also be discussed. 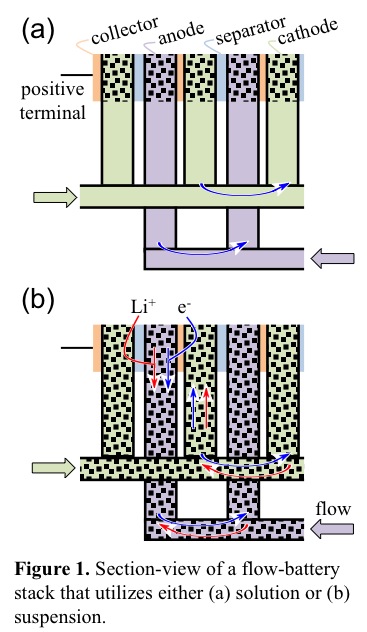