Sunrise, 2nd Floor, Galactic Ballroom 7 (Moon Palace Resort)
M. Angelo (Hawaii Natural Energy Institute, University of Hawaii - Manoa) and J. St-Pierre (University of Hawaii - Manoa)
This work reports the performance and durability effects resulting from exposing the cathode of a hydrogen proton exchange membrane fuel cell (PEMFC) to air containing benzene (BZ), sulfur dioxide (SO2), and nitrogen dioxide (NO2) at concentrations ≤ 2 ppm for single impurities and in mixtures.  This is the first phase of a project to deploy fuel cell powered buses in Hawai‛i Volcanoes National Park (HAVO).  The data reported herein is obtained from 50 cm2 single cells and will contribute to the future development of: (i) performance specifications for air filtration media used in fuel cell buses, (ii) a fuel cell stack model that predicts performance when impurities are present, and (iii) operational protocols for the system used to control the PEMFC stack.

The impurities investigated in this work have been studied previously as single impurities and shown to have a detrimental impact on fuel cell performance (1-3).   Some groups have also investigated impurity mixtures and reported that they can adversely affect performance even at ppm level concentrations (4-6).  One group identified a negative correlation between the performance of PEMFC systems and ambient air pollution (6).

More information on the performance and durability effects of both single impurities and mixtures is needed at conditions similar to those at which the fuel cell bus will be operating.  Additionally, the effectiveness of using clean air to recover performance must be evaluated given the challenging environmental conditions of HAVO.

Impurity exposures were performed by injection into the air stream of the PEMFC for a minimum of 20 hours.  Impurity concentrations were 2 ppm for single components, 1 and 1 ppm for two components, and 0.67 ppm x 3 for three components.  Concentration configurations were chosen to investigate if synergistic effects existed where the performance loss from multi-component mixtures was greater than the loss from equivalent single impurities.   The cell was operated at a temperature of 60ºC and constant current densities of 1 and 0.2 A cm-2.  Current densities were chosen to represent high and low power operating points.

Performance recovery was studied by supplying the cell with clean air for 20 hours and monitoring the change in cell voltage.

Fig. 1 shows the cell voltage loss resulting from exposing the fuel cell to impurities at 1 A cm-2. Also shown is the recovery during exposure to clean air.  Each contaminant significantly decreased cell voltage either as a single contaminant or in a mixture.  Mixtures resulted in greater performance loss than single contaminants alone; indicating that a synergistic effect existed and modeling efforts will have to account for this.  Performance loss for BZ and NO2 as single contaminants was completely recovered with clean air and was slightly higher than the performance prior to impurity exposure.  SO2 was the most significant impurity because it caused the greatest loss in performance, which could not be completely recovered using clean air.  Trends similar to those shown in Fig. 1 were observed at 0.2 A cm-2.

To determine the effects of the impurities on the durability of the MEA, diagnostics were performed before and after impurity exposure and included cyclic voltammetry to remove impurities from the catalyst and measure changes in electrochemically active surface area (ECSA). Polarization curves were also performed to quantify changes in cell performance.  The results will be reported along with gas chromatography data showing changes in the reactions for selected experiments.

Future system development efforts should limit impurity exposure to levels much lower than 2 ppm for all impurities studied in this work and consider designing air filtration media that prevents SO2 from reaching the cathode.

The authors are grateful for funding received from the Office of Naval Research (N00014-11-1-0391) and to the Hawaiian Electric Company for their ongoing support to the operations of the Hawai‛i Sustainable Energy. 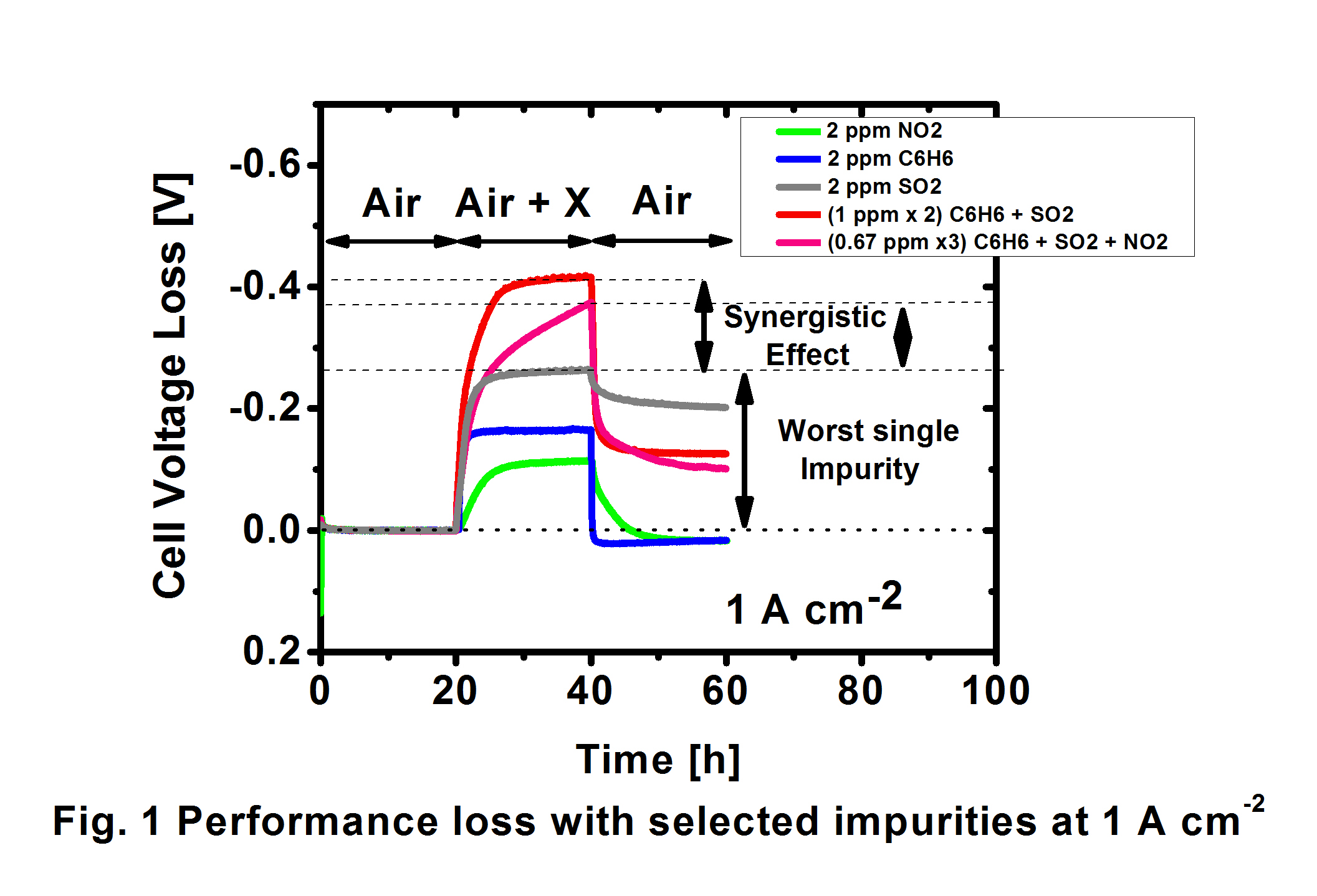