Expo Center, 1st Floor, Center and Right Foyers (Moon Palace Resort)
I. A. Cordova (Duke University), I. E. Stewart (Duke University - Department of Chemistry), J. O. Thostenson (Duke University - Department of Electrical & Computer Engineering), J. J. Amsden, C. B. Parker (Duke University), J. Liu, B. J. Wiley (Duke University - Department of Chemistry), and J. T. Glass (Duke University)
Transparent and flexible electronics make up a promising technological niche that is rapidly increasing to meet consumers’ demands. Furthermore, to support the high power and energy needs of the latest devices, the development of scalable flexible transparent supercapacitors relies on finding affordable raw materials that can be assembled through efficient production methods such as roll-to-roll processing. Although significant progress has been made in improving the performance of such transparent supercapacitors, their electrodes commonly rely on a thin layer of conductive nanomaterials such as carbon nanotubes, graphene, polymers, and metal oxides whose production and material costs can be very high. For example, recent studies have improved device performance utilizing nanowires and nanopillars based on indium oxide materials  as current collectors due to their intrinsic transparency (~90% in visible range) and high conductivity (~104S/cm). However, indium is a rare and expensive element whose processing techniques to produce the aforementioned structures are not industrially scalable. Additionally, silver nanowires have been explored as a replacement for tin-doped indium oxide (ITO) in transparent conductors since they can be synthesized, stored, and deposited from solution.  Again, the high cost of silver motivates a search for an alternative.

Our study demonstrates the potential to utilize raw materials and processing techniques that avoid many of these cost barriers associated with transparent electrodes to build a more viable transparent and flexible supercapacitor electrode. By optimizing the treatment and deposition of randomly distributed networks of solution-synthesized core-shell copper-nickel nanowires, we achieve a pseudocapacitive material that is a formidable candidate for use as a supercapacitor anode. Copper is chosen for our nanowires since it is roughly 1000 times more abundant, 1% the cost of silver, and only a exhibits a 6% loss in conductivity. Moreover, the synthesis method used to produce these nanowire structures is highly compatible with roll-to-roll manufacturing. This copper core serves as the conductive medium while the electrolessly deposited nickel shell protects the copper from oxidation. The nickel film can then be easily electro-oxidized in an electrolyte solution to form the nickel hydroxide species that are responsible for the pseudocapacitive charge storage mechanism. This study examines the trade-off of transparency vs. surface area/capacitance for transparent supercapacitors to facilitate the choice of the application-specific performance. We find that a thin layer of nanowires can exhibit areal capacitances greater than 1000 µF/cm2 at a sweep rate of 20 mV/s while maintaining roughly 80% transmittance with good cycle stability in 1 M KOH electrolyte. This is commensurate with many of the latest efforts devoted to developing transparent supercapacitors. Furthermore, we systematically characterize the material properties of electro-oxidized nickel coatings of various thicknesses to determine the optimum ratios for capacitance versus nanowire density and nickel composition for such a nano-architecture. 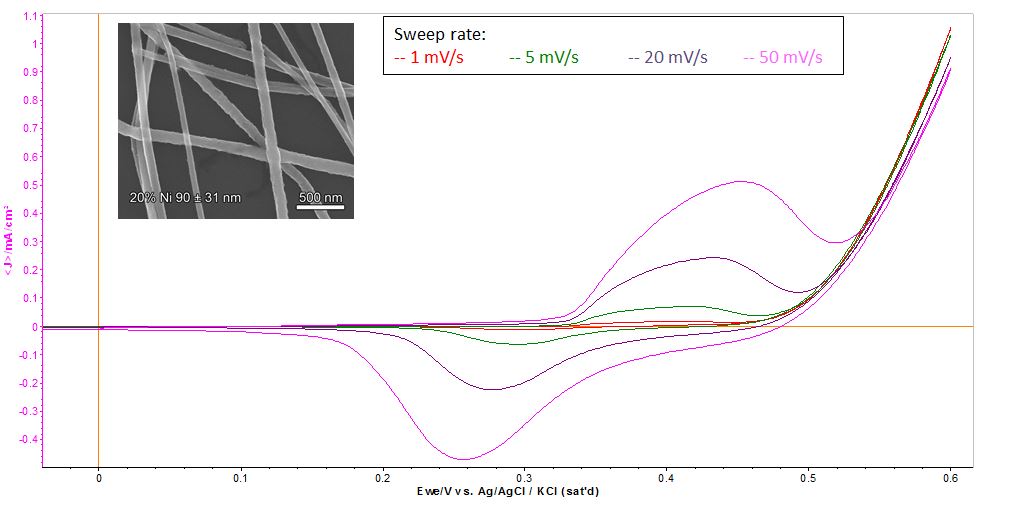