Our research group proposed a Rechargeable Direct Carbon Fuel Cell (RDCFC) based on SOFCs, in which carbon is deposited in the pores of the anode by charging hydrocarbons [1]. A issue in RDCFCs is low utilization caused by low amount of deposited carbon. For higher fuel utilization, we also proposed a Rechargeable Solid Carbon Fuel Cell (RSCFC), in which solid state carbon black (CB) is directly supplied as fuel. In RSCFCs, the dominant electrochemical reaction apparently is CO oxidation reaction[2] [3] because CB is difficult supplied close to TPB (Triple Phase Boundary), and CO was generated by Boudouard corrosion reaction (C+CO2→2CO). In an earlier study, we reported that improvement in the maximum power density PMax of RSCFCs depends on the amount of CB. In RSCFCs, high power density P with high fuel utilization U is achieved at the steady state current density i0, which is reached when the CO supply rate rsup (includes the CO generation reaction rate rCO, and both CO and CO2 diffusion rates rD(CO), rD(CO2) in the anode is comparable to the electrochemical reaction rate re (CO + O2- → CO2 + 2e-). The introduction of carbon black into pores made the direct carbon oxidation (C + 2O2- → CO2 + 4e-, C + O2- → CO + 2e-) enhanced and improved the power density.

In this study, we (a) analyzed mass transport in CB supply column using gas diffusion theory, (b) investigated the influence of CB supply densityη(=m/SL, m is amount of CB, S is cross-section area of column, and L is the distance of CB supplied) and the rate of anode porosity εe on the power density.

Fig.1 shows the performance curves of the RSCFC for different εCB. With small εCB (Fig.1b), PMax was higher. It was because of an increase in the rsup caused by the increase in the rCO due to increase in the total surface area of CB per unit volume of CB supply column.

Fig.3 shows the IV characteristics in each power generation cycle of the cell using (a) Ni/GDC electrode and (b) Ni/GDCCB (1.85wt %). In the power generation using the Ni/GDCCB (1.85wt %) electrode, which had larger εe than the Ni/GDC electrode, the maximum current density iMax was improved by 30 mA/cm2 and PMax improved by 50% (to 34.6mW/cm2). The possible reasons for the enhancement were considered as (1) an enhancement of direct oxidation of CB due to the inner surface of the anode, and (2) a reduction of pore diffusion resistor inside the anode.

The PMax of RSCFC with 2% less εCB of an anode was improved by 6.74 mW/cm2. It was because of an increase in the rsup caused by the increase in the rCO due to increase in the total surface area of CB per unit volume of CB supply column. Meanwhile, by using large εe of an anode, the PMax was increased (using Ni/GDC1.85%CB anode, improved by 11.72 mW/cm2). The possible reasons for the improvement were (1) an enhancement of direct oxidation of CB due to the inner surface of anode, and (2) a reduction of pore diffusion resistor inside the anode. 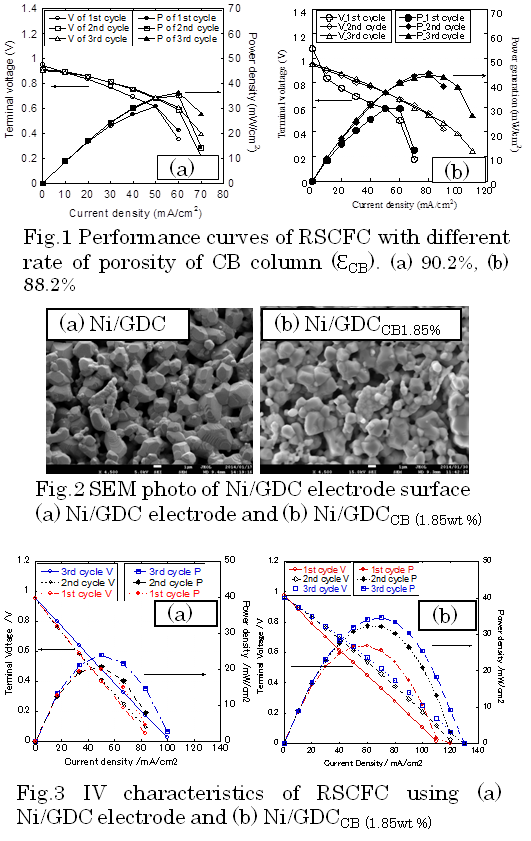