1082
Microstructure Characterization of a PEMFC Catalyst Layer: Effect on Performance

The structure and morphology of the electrode layer play important roles in controlling many aspects of fuel cell performance. Within the catalyst layers (CLs), the hydrogen oxidation and the oxygen reduction reactions take place, involving complex mass and charge transport processes (diffusion of reactants and products, migration and diffusion of protons, migration of electrons, permeation, electroosmotic drag, as well as vaporization/condensation of water) 2.

Previous studies performed on the influence of the ionomer loading on the catalyst layers has shown that this parameter has an effect on the dispersion of the carbon aggregates, the thickness of Nafion® films covering the catalyst/carbon surface and therefore the porosity of the CLs. Typical loadings for Nafion® ionomer have been reported to be within the range of 30-40% 3.

In this study, the microstructure of PEMFC electrodes with different variations in terms of ionomer to carbon (IC) ratios, ionomer equivalent weights and electrode thickness (by means of variations in Pt loading) were evaluated by scanning electron microscopy (SEM), transmission electron microscopy (TEM) and Brunauer-Emmett-Teller (BET) nitrogen adsorption, including materials dispersion and porosity in CLs for freestanding electrodes (Figure 1).

Some images of a typical catalyst layer are shown in Figure 1.  Several typical features are shown here, providing indications of the large-scale porosity of the layer as well as images showing expanses of ionomer with and without embedded Pt particles.  In previous studies4, measurements of water transport in similar CLs suggested that sub-saturated catalyst layers have a less connected ionomer network than that expected from uniform coverage of particles in the layer.  Microscopy and other measurements noted above on a series of systematically modified catalyst layers will be summarized in an attempt to assess this finding. Single cell performance with these catalyst layers was evaluated in order to analyze the relationship with the structure properties.

NMC gratefully acknowledges the support from a Fulbright Fellowship.  Additional support was provided by the NSF EPSCoR program. Research supported at ORNL by the Fuel Cell Technologies Office, Office of Energy Efficiency and Renewable Energy, U.S. Department of Energy. 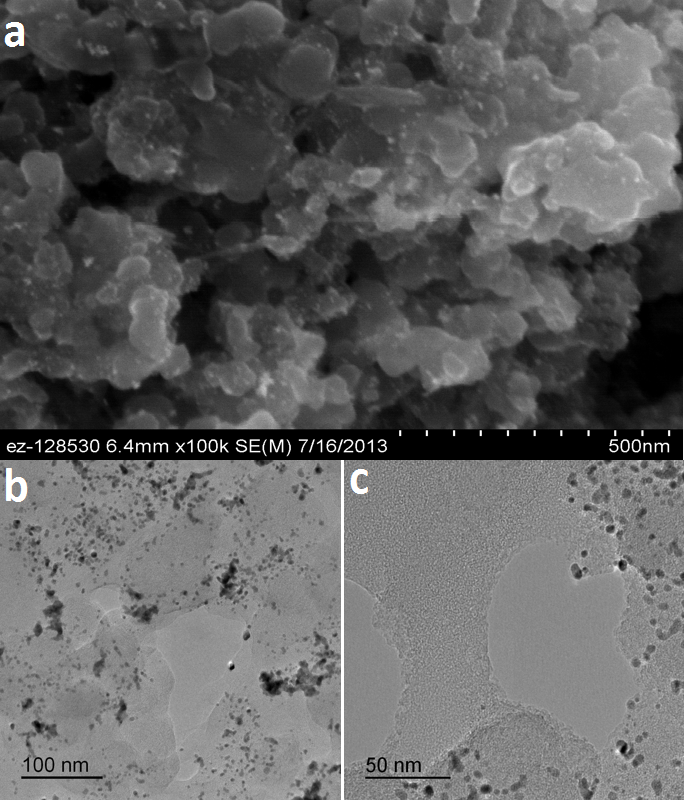