Sunrise, 2nd Floor, Galactic Ballroom 7 (Moon Palace Resort)
M. Aghighi and J. T. Gostick (McGill University)
(PEMFCs) are a major component of a sustainable energy economy. Their high energy and power density make them uniquely capable of replacing the internal combustion engine. The porous electrode in the PEMFC must be designed to withstand the presence of liquid water, which is a by-product of the electrochemical reaction.  Ensuring high rates of gaseous reactant transport to the catalyst layer is essential to producing high power density, efficient and cost effective cells. Consequently, the study of liquid water behavior in the porous electrodes is of extreme interest.

A very large number of numerical models have been published, attempting to use multiphase flow models in PEMFC and computational fluid dynamics packages based on continuum mechanics to optimize the electrode. There are several limitations to the continuum approach that will be discussed.  The most obvious is that the transport properties must be measured experimentally, and then input into the computation as constitutive relationships. This is problematic for properties are difficult to measure, such as effective diffusivity in partially water saturated media [1, 2], gas-liquid surface area, etc. An alternative modeling approach that is receiving increased interest is pore network modeling (PNM). In PNMs, the media is mapped as a set of interconnected pores and throats, transport is modeled as a resistor network and capillary behavior is modeled using percolation theory concepts.  In this paradigm there is no difficulty modeling the impact of multiphase flow, and importantly, PNMs do not require experimentally measured transport parameters are constitutive relationships.

A pore network model produced using the OpenPNM package has been developed to simulate the impact of mass transfer through the GDL network on the electrochemical kinetics and fuel cell operation. OpenPNM is an open source framework implemented in Python. This framework is capable of building a porous structure, applying pore-scale physics, and simulating numerous algorithms on pore network models.  In this work, constant voltage boundary conditions have been applied to the catalyst layer to predict overvoltage in proton exchange fuel cell systems, as shown by the polarization curve in Figure 1. As can be seen, the mass transfer losses place an upper limit on the maximum current that can be generated in a cell.  Only mass transfer losses in the GDL are considered, but there is no theoretical reason why the catalyst layer can cannot be included in future work. This approach can be extended to include ionic losses in the membrane phase as well. The eventual goal is to provide a fully viable alternative to the continuum model approach.

This work was funded by AFCC and the NSERC CRD program. 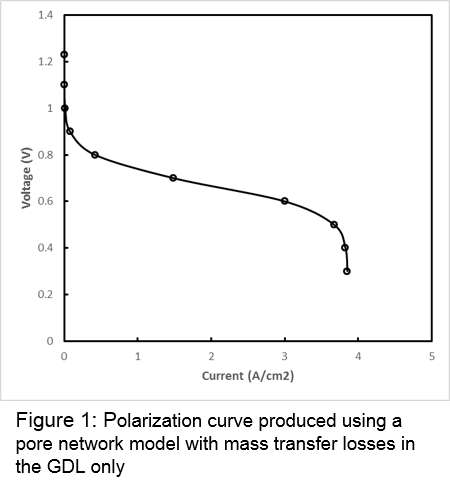