Sunrise, 2nd Floor, Galactic Ballroom 8 (Moon Palace Resort)
C. R. Kreller, D. Spernjak (Los Alamos National Laboratory), W. Li, P. Palanisamy (ESL ElectroScience), E. L. Brosha, R. Mukundan, and F. Garzon (Los Alamos National Laboratory)
Lean-burn operation of both diesel and gasoline direct injection engines has the potential to increase fuel economy by consuming almost all of the fuel in the presence of excess air.  However, the oxygen rich exhaust prevents reduction of NO via three-way catalytic converters commonly used to reduce emissions in stoichiometric engines1. Vehicle manufactures are pursuing selective catalyst reduction (SCR) and exhaust gas recirculation (EGR) systems to meet EPA emissions regulations for lean-burn engines. SCR systems typically use a zeolite catalyst that selectively adsorbs NOx molecules and converts them to N2 and H2O with the injection of a urea water solution. In EGR, exhaust gas is mixed into the intake manifold air in order to lower the temperature of combustion, reducing NOx emissions.  EGR systems have been used in gasoline engines for several decades, however the higher oxygen content of diesel exhaust requires that it be pre-cooled before mixing with the air intake. The percentage of recirculation and temperature of the exhaust gas need to be carefully controlled in order to reduce emissions without sacrificing engine efficiency and fuel economy. Exhaust gas sensors are needed to monitor emissions and control and maintain efficient operation of SCR and EGR systems. Oxygen λ-sensors are an integral part of onboard diagnostics (OBD) of today’s stoichiometric vehicle emission systems, but a suitable analog is not available for NOx and NH3 detection and discrimination in lean-burn engines.

Mixed-potential sensors fabricated via well-established commercial manufacturing methods present a promising avenue to enable the widespread utilization of NOx and NH3 sensing technology. These electrochemical devices develop a non-Nernstian potential due to differences in the redox kinetics of various gas species at each electrode/ electrolyte/ gas interface. The electrode potential is not fixed by equilibrium thermodynamics as it is in the O2 λ-sensor, but rather by the rates of different electrochemical reactions occurring simultaneously at each electrode/ electrolyte interface. Therefore, device-to-device reproducibility of the triple phase interface, as well as long term morphological stability are required. The patented LANL sensor design incorporates dense electrodes and a porous electrolyte 2. The use of dense electrodes minimizes deleterious heterogeneous catalysis, and the increased morphological stability of dense electrodes yields a robust electrochemical interface, increasing lifetime durability 3. The Materials Synthesis and Integrated Devices group at LANL has worked in collaboration with Electro-Science Laboratories (ESL, King of Prussia, PA) to fabricate planar mixed-potential sensors via the readily scalable, cost-effective high temperature co-fired ceramic (HTCC) technology already employed in the manufacturing of planar O2 λ-sensors.

The two sides of a planar, self-heated, tape cast sensor prototype are shown in Figure 1. A Pt-heater with independent leads is printed on the backside of the ceramic substrate. A heater is employed to operate the devices between 400-600˚C where the YSZ possesses sufficient ionic conductivity and the rates of the electrochemical reactions do not impede the response time of the device.  The sensing element is printed on the opposite side of the ceramic substrate and consists of dense, screen-printed electrodes coated with a porous YSZ electrolyte layer.

We have developed two distinct sensing platforms for NOx and NH3 detection. The NOx sensor consists of La1-xSrxCrO3 and Pt electrodes. Under open circuit conditions, this sensor responds to many of the constituents of concern in emissions monitoring, however, the selectivity may be tuned by operating conditions 4. By operating at a small positive current bias, this sensor becomes preferentially selective to NOx species.  Selectivity towards non-methane hydrocarbons (NMHC) is improved by operation at elevated temperatures, however sensitivity is reduced. The NH3 sensor consists of Au/Pd and Pt electrodes and is minimally sensitive to NOx species with varying sensitivity to NMHCs depending on operating temperature. The voltage response of both sensor constructs to various gases is shown in Figure 2.

The research was funded by the US DOE, EERE, Vehicle Technology Programs. The authors wish to thank Technology Development Manager Roland Gravel. 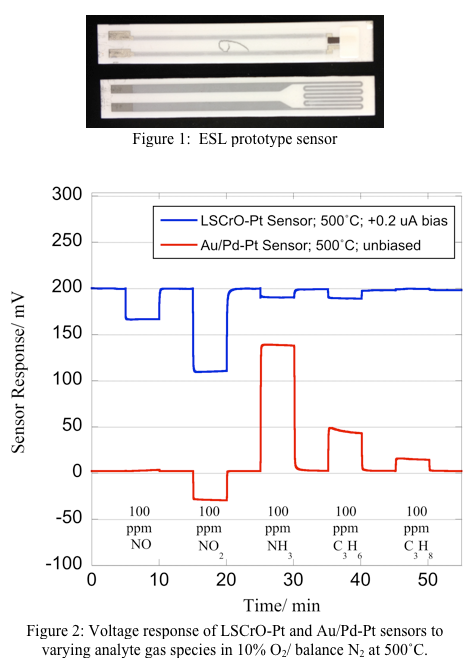