1484
The Structure of Electrodeposited Aluminum Alloys from Chloroaluminate Ionic Liquids: Let’s Not Ignore the Temperature

Expo Center, 1st Floor, Universal 3 (Moon Palace Resort)
G. R. Stafford (National Institute of Standards and Technology), T. Tsuda (Department of Applied Chemistry, Graduate School of Engineering, Osaka University), and C. L. Hussey (University of Mississippi)
The electrodeposition of aluminum alloys from chloroaluminate electrolytes has a rich history, beginning with the high temperature alkali halide-based melts, such as AlCl3-NaCl, and transitioning into the ambient temperature analogs, such as AlCl3-1-ethyl-3-methylimidazolium chloride ([EMIM]Cl). Although still very much moisture sensitive, these organic halide systems became widely accepted due to their extremely low vapor pressure, which made them experimentally less challenging. More recently with the introduction of the air- and water-stable systems that do not necessarily require handling in an inert atmosphere, a significant portion of the current electrodeposition research is being conducted at or near ambient temperature.

Electrodeposited alloys are rarely in thermodynamic equilibrium, and several unique microstructural features such as extended solid solubility, metastable crystalline phases, and metallic glasses are generally observed. While exact correlations between electrodeposition and vapor deposition have not been developed, the excess free energy possible in alloys produced by these two techniques is similar and on the order of 50 kJ mol-1. Because the excess free energy of the deposit is inversely proportional to the atomic mobility, phase constitution depends strongly on deposition temperature. This talk will focus on the influence of deposition temperature on the crystal structure of electrodeposited aluminum-transition metal alloys.

As an example, Figure 1 shows a diagram of the structures observed over a large range of compositions and deposition temperatures for Al-Mn alloys electrodeposited from Lewis acidic AlCl3-NaCl containing controlled additions of MnCl2. There are basically two temperature regimes where the phases have varying degrees of excess free energy with respect to those expected from the equilibrium phase diagram.  At lower temperatures (150 to 250 °C), no equilibrium structure other than the fcc Al solid solution is observed. The dominant phases present are a metallic glass at low Mn composition and a number of metastable crystalline phases such as γ-brass Al8Mn5, B2 AlMn and L10 AlMn, which appear as high-temperature variants on the equilibrium phase diagram. These structures generally have high symmetry, and for this reason are relatively easy to nucleate.  Notice that all of the crystalline phases deposited at low temperature have cubic or near-cubic symmetry. In the temperature range of 250 to 425 °C, some of the phases predicted by the equilibrium phase diagram at these temperatures, such as Mn4Al11 and γ2 Al8Mn5, are deposited. The formation of these phases is thermally activated at elevated deposition temperatures. The metallic glass turns into a multi-phase structure at elevated deposition temperature, comprised primarily of equilibrium MnAl6 and the icosahedral phase, showing 5-fold rotational symmetry. Figure 1 clearly shows that the phase constitution depends strongly on alloy composition and deposition temperature. Variations in current density may influence alloy composition, but appear to have a negligible effect on the structure of the electrodeposit.  For instance, two alloys of identical composition that have been deposited at the same temperature, but at different current densities from electrolytes containing different amounts of Mn2+, have essentially the same crystal structure.

Another alloy system showing interesting temperature dependence is Al-Ti. Here we compare two alloys of similar composition, one deposited from AlCl3-[EMIM]Cl at 80 °C and the other from AlCl3-NaCl at 150 °C. The electron diffraction pattern from the AlCl3-[EMIM]Cl deposit (Fig. 2(a)) is consistent with single phase, disordered fcc Al-Ti. Figure 2(b) shows the diffraction pattern from the AlCl3-NaCl deposit, which in addition to the fcc structure, shows the superlattice reflections indicative of L12 ordering. The appearance of antiphase boundaries in the ordered alloys (not shown) suggests that the deposit may be disordered initially and then orders in the solid state, subsequent to the charge transfer step and adatom incorporation into the lattice. This is very similar to the disorder trapping observed in rapidly solidified alloys. The measured domain size is consistent with a mechanism of diffusion-controlled domain growth at the examined deposition temperatures and times. 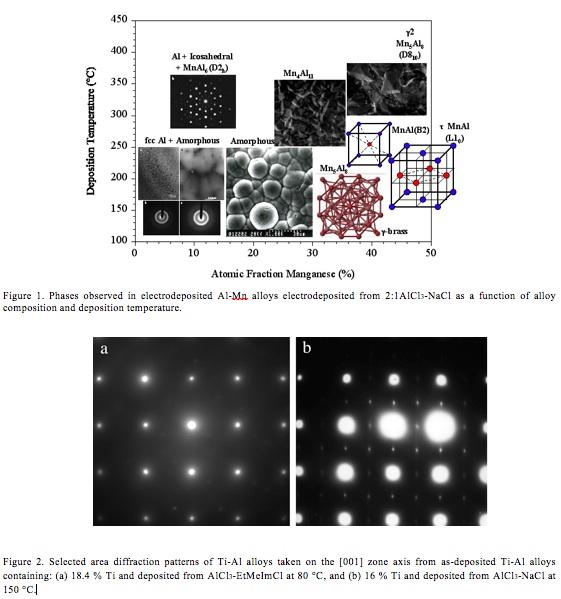