Expo Center, 1st Floor, Universal 15 (Moon Palace Resort)
J. N. Harb, U. Teki (Department of Chemical Engineering, Brigham Young University), and C. Lueth (CD-adapco)
Over 2 million miles of pipeline in the United States alone are used to transport a variety of products that include natural gas, crude oil, and petrochemicals [1].  Pipelines are also essential for water distribution.  A breech in pipe integrity due to corrosion leads to a disruption of service and, in the worst case, a catastrophic accident or environmental disaster.  Impressed current cathodic protection (ICCP) is commonly used to protect buried pipelines and is the topic of this paper.

The reduction of oxygen is the primary cathodic reaction in the corrosion of steel pipelines. Oxygen is also important for the formation of protective films on the metal surfaces.  Therefore, the factors that influence the supply of oxygen to the external surface of the pipeline are critical in determining the corrosion behavior. Oxygen transport is a strong function of the moisture level in the soil, and is faster at low moisture fractions [2]. The moisture content, and hence oxygen transport, varies with the local terrain, the depth of the water table, and climatic factors. The reactivity of the soil also influences the local oxygen content [3].

The corrosivity of the soil is frequently associated with its conductivity, with more conductive soils classified as more corrosive [4].  The electrical conductivity of the soil tends to increase with increasing moisture content, as does the transport of potentially aggressive solutes to the pipe surface. However, the direct connection to increased corrosion is unclear as multiple factors appear to be important [2]. For example, corrosion rates for soils with moisture contents of 60-65% of saturation have been observed to be higher than those in water-saturated soil [2,5].

The present study uses a three-dimensional finite volume mathematical model to simulate the cathodic protection of buried pipelines.  The multidimensional nature of the model enables simulation of non-uniformities in the soil due, for example, to the water table or the presence of different soil types.  The influence of other factors such as the geometry, location and properties of the anode bed can readily be determined. The model also permits calculation of variations along the length of the pipe and across the cross-section of the pipe, both of which are important. It includes oxygen transport and the consumption of oxygen in reactive soils. The oxygen transport and potential field calculations are appropriately coupled.  Both coated and bare pipes are considered.

Example results are shown here for a 100m length of pipe protected by a single anode with an active surface area of 0.1 m2.  Figure 1 shows the solution potential at the surface of the pipe at a low oxygen transport rate, where variations along the length and circumference of the pipe are evident.  The difference in the oxygen profile due to a reactive soil is shown in Figure 2.  Simulations such as these enhance our understanding and ability to design effective cathodic protection systems for buried pipelines. 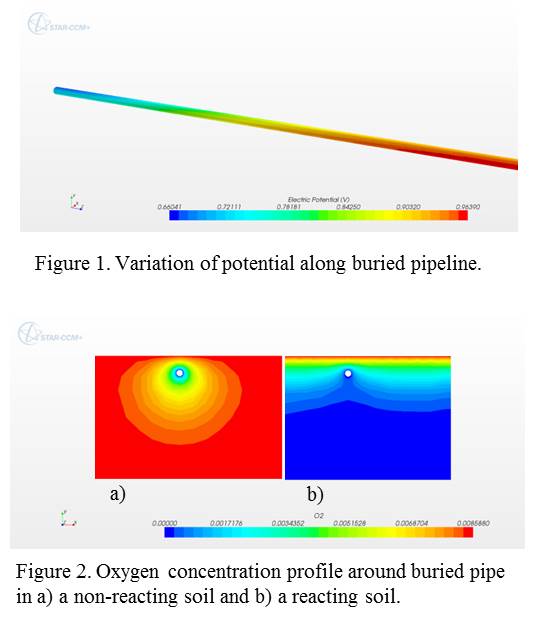