Expo Center, 2nd Floor, Beta Room (Moon Palace Resort)
C. Santoro, S. Babanova, K. Artyushkova, J. A. Cornejo (University of New Mexico, Center for Emerging Energy Technologies), L. K. Ista, A. J. Schuler (University of New Mexico), and P. Atanassov (University of New Mexico, Center for Emerging Energy Technologies)
Bioelectrochemical oxidation carried out by bacteria attached on a solid electrode is capturing the attention of scientists all over the world. Different species of bacteria have been shown as electroactive and being able to naturally oxidize organic compounds releasing electrons that can be transferred to a conductive solid support. If the oxidation reaction is coupled with the oxygen reduction reaction (ORR), the degradation of organics could led to a production of useful electricity and water. Those related aspects are currently utilized in the development of alternative and cost effective bioelectrochemical systems (e.g. microbial fuel cell (MFC)) for simultaneous organics removal and electricity production. Understanding the bioelectrocatalytic nature of organics dissimilation by bacteria and the subsequent internal and external electron transfer is of a high importance for the further development of these systems and a key moment in their future application.

In this work, an artifical approach for enhanced microbial bioelectrocatalisis was explored along with study of the parameters promoting bacteria external electron transfer. This approach consisted of artificial modification of electrode surfaces having as a result different surface chemistries. Mixed bacterial culture development, biofilm growth and electrochemical performance have been studied. Smooth gold surfaces were modified with organic thiols to form self assembled monolayers (SAMs) with various functional groups (-CH3, -OH, -N(CH3)3 and -COOH). The modified anode materials were further explored in a single chamber membraneless microbial fuel cell (SCMFC) with a volume of 130 ml1. The media solution was composed of activated sludge (AS), wastewater (WW) and phosphate buffer solution (100 mM). AS and WW were taken from the Albuquerque wastewater treatment plant and were used as a supply of diverse bacterial species. Sodium acetate (NaOAc) in concentration of 3gL-1 was used as organic fuel. For biofilm development and electrochemically “forced” selection of electrogenic bacteria, the anode and cathode were connected over an external resistor of 1000Ω. The voltage was recorded over time to elucidate the start up time. After 30 days of operation, power curves and single electrode polarizations have been taken to evaluate the performance of the SCMFC as a whole and of the electrodes separately. Bioelectrocatalytic features of the bacteria consortium have been elucidated running cyclic voltammetries (CVs) at different scan rates (2, 5, 10, 20, 50, 100, 150 and 200 mVs-1) from which a conclusions about the electrons transfer mechanism were withdrawn and the electron transfer rate constants were determined. In addition the bacteria biomass and biofilm development was tracked over time2.

The results showed clear trends with -N(CH3)3 modified surfaces having the shortest start up time reaching a voltage of 400 mV after 19 days. Gold-COOH was the second preferred surface for bacteria attachment and biofilm growth generating stable voltage output after 26 days followed by slightly slower gold-OH start up (30 days)(Figure 1). -CH3 modified surfaces slightly increased their performance over time but never reached similar values compared with the other surfaces most likely due to the hydrophobicity of the surface, which provides “unfriendly” environment for bacteria attachment. The recorded power curves showed the same trends: -N(CH3)3 had a power of ≈450μW, -COOH ≈425μW and -OH ≈330μW. -CH3 produced just few μW (Figure 2). CV was performed on the anode and the curves at scan rate of 10 mVs-1 here are presented (Figure 3). Electron transfer rate constant was determined following the same trend as the operational characteristics of the anodes and SCMFCs: -N(CH3)3>-COOH>-OH>-CH3 (Table 1). It can be noticed that the Ket is in the same order of magnitude for -N(CH3)3, -COOH and -OH modifications and three orders of magnitude lower in the case of -CH3. Logaritmic dependence of the generated current from the Ket was observed demonstrating the importance of the electron transfer over the operation of these systems and the feasability of the implied approach towards enhancement of the microbial bioelectrocatalysis through the selection of proper surface chemistry. 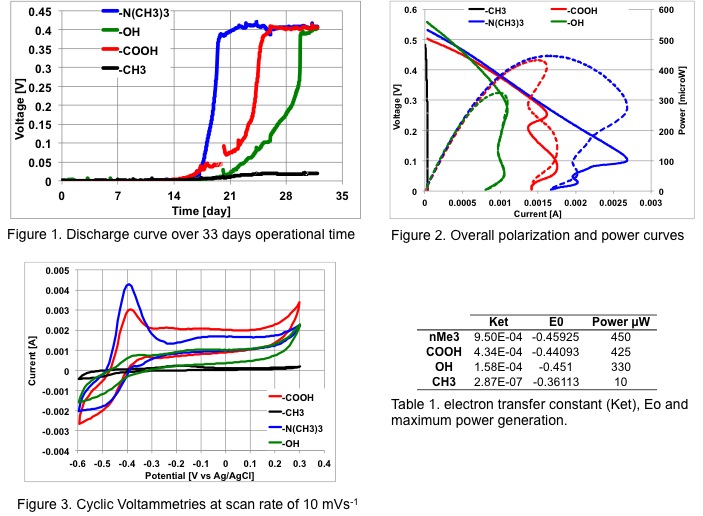