Expo Center, 2nd Floor, Beta Room (Moon Palace Resort)
Y. Feliciano and S. Calabrese Barton (Michigan State University)
In mediated enzyme electrodes, electrons are transferred between the enzyme and electrode surface via a redox species [1]. Previous studies have documented the parameters affecting mediated GOx electrodes and the effect of the composition, mediator structure, pH etc [2]. Our previous work describes the optimization of mediator redox potential for a laccase-catalyzed oxygen reduction electrode [3]. This result leads us to our current research, focused on modelling the composition dependence of the electrode structure, in terms of the balance between loadings of enzyme and mediator.

The electrode under study is a 3 mm diameter glassy carbon rotating disk electrode, modified with a film consisting of glucose oxidase crosslinked with poly(N-VI12[Os(bpy)2Cl]+/2+. The electrochemistry of this electrode, both in terms of mediator redox kinetics and glucose oxidation at pH 7, is studied as a function of GOx, mediator, and crosslinker mass loading. Fig. 1 summarizes  cyclic voltammetry (glucose-free) and polarization curves (with glucose) of the modified electrode at a total loading of 0.726 mg cm-2. Glucose-free peak current remains steady at low GOx content, decreasing as mediator content diminishes.  An optimum glucose conversion current density is found at 40 wt% GOx, where the catalytic and electron transport properties are balanced.

A mathematical model is used to predict the electrode activity. A key consideration is the film thickness, ℓ, which is assumed to vary according to:

where γm and γe are the mass loadings of mediator and enzyme, respectively, and km and ke represent the effective densities of each component. Electrode thickness is measured independently and correlated to component loading, yielding estimates for the effective densities. This model is correlated to independent measurements of thickness using applied force microscopy (AFM) and profilometry, and the effect of film swelling is considered by experiments with both dry and wet films, applied by both drop deposition and spin coating (Figure 2).
ACKNOWLEDGEMENT
The authors thank the U.S. Dept. of Education for partial support of this work through a Graduate Assistantship in Areas of National Need (GAANN) fellowship for YF.
REFERENCES
1.  S. C. Barton, J. Gallaway and P. Atanassov, Chem. Rev., 104, 4867-4886 (2004). 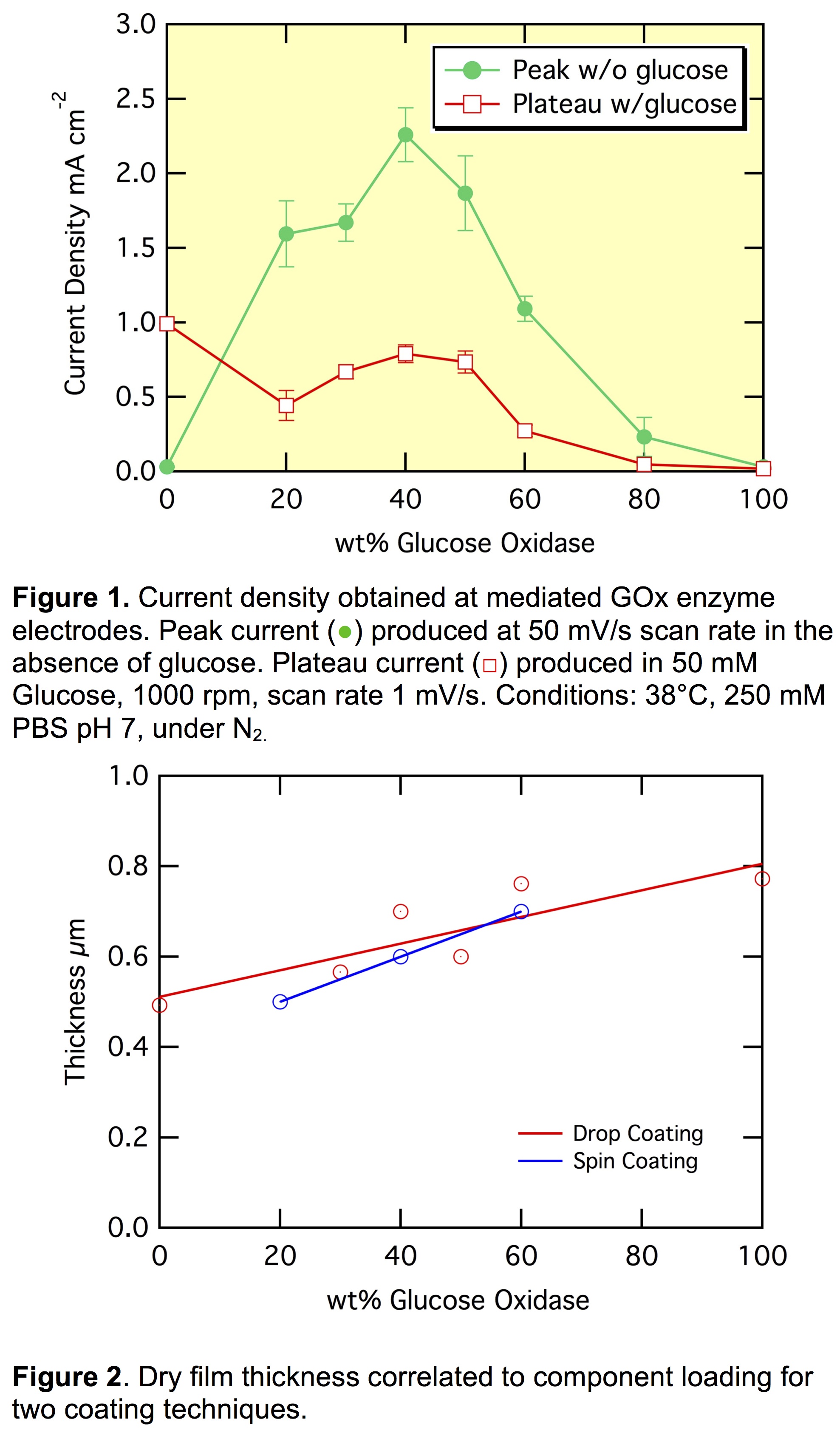