Sunrise, 2nd Floor, Star Ballroom 5 (Moon Palace Resort)
M. Wu, X. Song, A. Minor, V. Battaglia, and G. Liu (Lawrence Berkeley National Laboratory)
Silicon (Si) appears to be an attractive candidate for lithium-ion batteries because it delivers 10 times greater theoretical (∼4200 mAh/g) speciﬁc capacity than that of a traditional graphite anode (∼370 mAh/g). Conductive polymer binder poly(9,9-dioctylfluoreneco-fluorenone-co-methylbenzoic ester) (PFM), was applied to micrometer-sized Si particles, fast fading was still observed due to the mechanical degradation of the Si electrode during cycling. Similarly, this has been demonstrated when using the conventional polymer binder poly(vinylidene fluoride) (PVDF) in prior works. In this contribution, we report a new strategy: by simply adding small amount of nanosized Si (n-Si) as an additive, along with the advantages of the conductive polymer binder (PFM), we are able to apply low-cost and low-specific-area micrometersized silicon particles (m-Si) into lithium-ion battery anodes with high specific capacity and significantly improved cycle life.

It has been known that m-Si-based lithium-ion batteries fail in a few cycles due to the pulverization and fatigue of the electrode arising from stresses generated by the huge volume change of Si associated with the insertion and extraction of lithium. Figure 1a shows the schematic presentation of composite anode electrode using m-Si, the conductive polymer binder PFM, and conductive additive acetylene black (AB). AB is nanosized conductive additive used in lithium-ion batteries since its early days.  While AB is used in the electrode, it does not contribute to energy storage and acts as a “passive” conductivity enhancer to facilitate electron transport from the active materials to the current collector, which improves electrode power capability. However, because AB has no mechanical binding force to either the Si or the conductive polymer binder PFM, during the large volume expansion of any individual m-Si particles (which is in cube micrometer range) both AB and polymer binders tend to be pushed away from the m-Si particles, leading to a void space or gap between the m-Si particles and the conductive network, leading to broken electrical connections. To maintain conductivity and power capability, a relatively large amount of AB needs to be added, which reduces the volumetric and gravimetric lithium-ion storage capacity. In contrast, when AB is replaced with n-Si particles, as shown in Figure 1b, n-Si tends to self-assemble on the surface of m-Si and form a new 3D network structure with m-Si during the lithiation process. This network forms physical connections between m-Si and helps to draw polymer binder back and holding the integrity of the electrodes during the large volume extraction process of delithiation.

As shown in Figure 2a. The anode was composited of m-Si without any n-Si. Cycling of m-Si/AB/PFM started at high lithiation capacity but faded quickly to nearly zero within five cycles, with large initial irreversible capacity. In contrast, as n-Si replaced AB (Figure 2b), a high discharge capacity with only a small decrease was observed within five cycles with a high initial coulombic efficiency of 73%. More significantly, the charge capacity retention was kept up to 75% over 30 cycles. 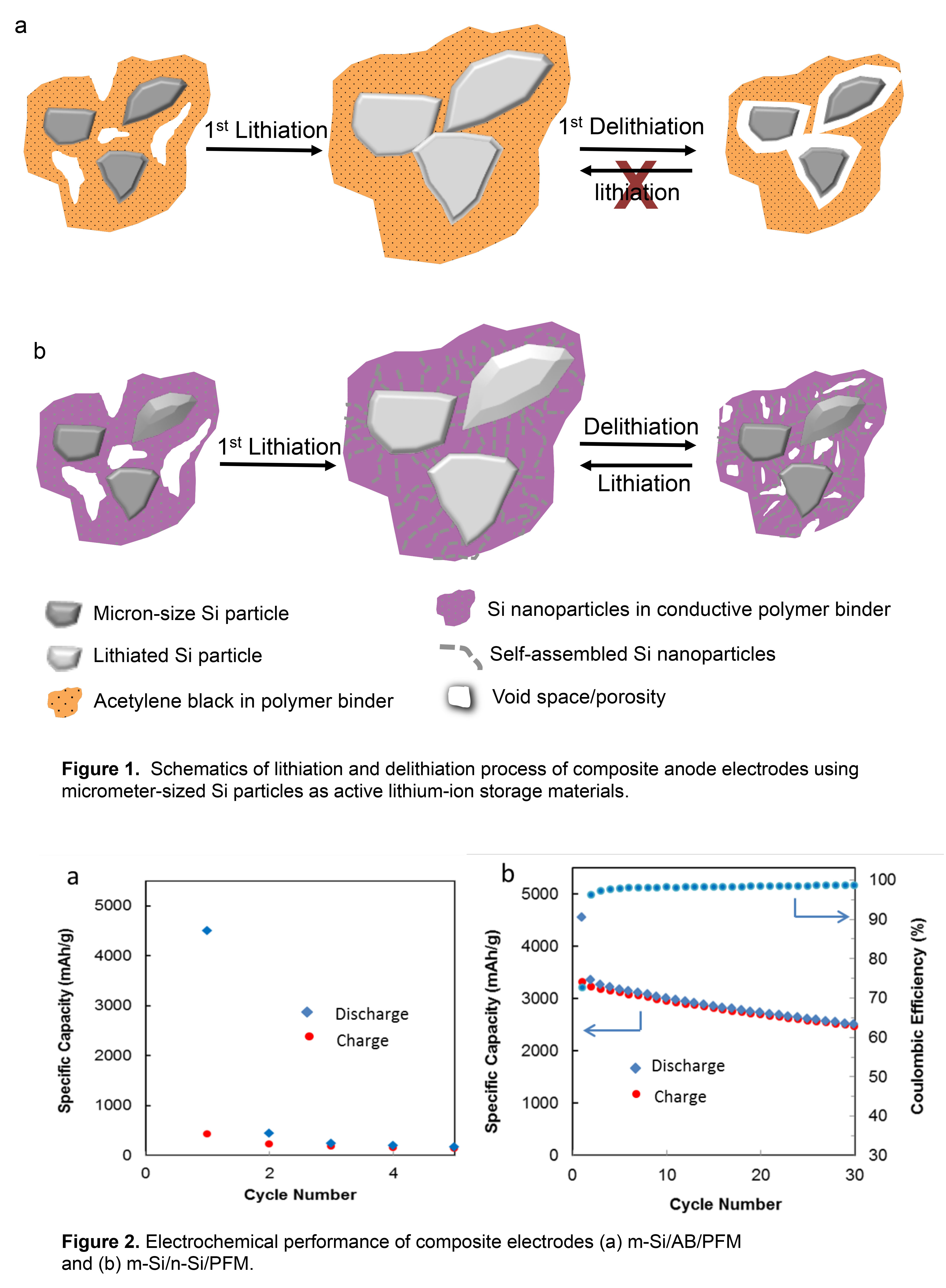