Expo Center, 1st Floor, Center and Right Foyers (Moon Palace Resort)
R. A. Martínez-Rodríguez (University of Puerto Rico, Río Piedras Campus, Institute of Electrochemistry, University of Alicante), F. J. Vidal-Iglesias (Institute of Electrochemistry, University of Alicante), J. Solla-Gullón (Instituto de Electroquímica, Universidad de Alicante), V. Montiel (Institute of Electrochemistry, University of Alicante, Apdo 99, 03080 Alicante, Spain), C. R. Cabrera (University of Puerto Rico at Rio Piedras), and J. Feliu (Instituto de Electroquímica, Universidad de Alicante)
Intensive research has been focused on the study of the production of well-defined structured nanoparticles. This is due to the different properties possessed by these materials according to their size/shape. One of the most studied noble metals is Platinum (Pt) due to its catalytic properties and different methods have been reported to prepared. However, it is of great importance to find easy new ways as well as cost effective and scalable method to synthesize them. In a recent communication [1] we have reported, for the first time, the synthesis of cubic Pt nanoparticles with a very high yield using a water-in-oil (w/o) microemulsion method in which HCl was added in the aqueous phase of the w/o microemulsion. This method, unlike others such as the colloidal method, fulfils these previous requirements. This works pretends to explain the effect on the shape of the nanoparticles of different surface modifiers added in the aqueous phase using also different Pt precursors. In addition, bimetallic nanoparticles have been prepared with similar methodology and the effect of the adsorbates will be evaluated. The nanoparticles have been electrochemically characterised by hydrogen and Ge ads/desorption processes, CO monolayer oxidation and ammonia electro-oxidations have been also studied as test reactions in order to determine the efficiency in the catalytic activity. 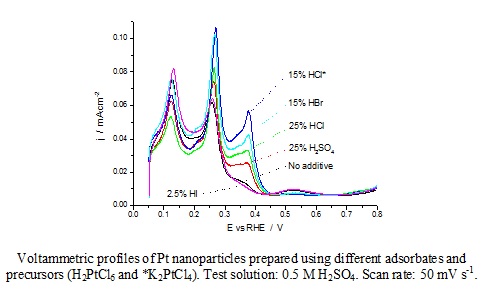