Sunrise, 2nd Floor, Galactic Ballroom 4 (Moon Palace Resort)
M. A. Abreu Sepulveda (National Energy Technology Laboratory, University of Rochester), A. Manivannan (U.S. Department of Energy), S. R. Narayan, P. Trinh, S. Malkhandi (University of Southern California), and D. J. Quesnel (University of Rochester)
Among the fundamental challenges for enabling metal-air batteries and fuel cells is the oxygen electrocatalysis at the so called air-cathode. Numerous research work has been carried out on the synthesis of new cathode materials in order to reduce the voltage loss associated with the oxygen reactions.  ORR and OER have proven to be catalytic dependent electrochemical processes, and thus, the catalytic material at the oxygen-consuming electrode plays an important role in the performance of such technologies.

Current catalysts used for air cathodes can be classified into noble metals and metal alloys, carbons, and transition metal oxides.  Platinum and carbonaceous electrodes such as Pt-nanopartices dispersed on graphene have been the primary choice to catalyze the ORR because of their known superior electrocatalytic activity. However, carbonaceous materials are poorly stable anodically and readily decompose to oxidize carbon. On the other hand, the oxygen evolution reaction shows little activity on carbonaceous materials, and hence transition metal oxides and noble transition metal oxides are being studied for these purposes. Lanthanum cobalt oxides [1] and lanthanum nickelates [2] of the form ABO3, have also shown promising catalytic activities and good stability. In the present, the electrochemical performance of ruthenium as B site element is studied. Compared with other platinum group metals, ruthenium has exhibited remarkably oxygen evolution activities in alkaline media [3]. A group of lanthanum ruthenate materials including LaRuO3 and La2RuO5 have been synthesized, characterized and studied for oxygen electrode applications. The ruthenate compounds were synthesized by the well-known Pechini polymerization method. All the samples were characterized by XRD for phase analysis and XPS for valence state determination. For the electrochemical measurements, a traditional three-electrode cell was employed. The working electrode consisted of a modified glassy carbon disk with a catalyst ink. The ink was prepared by mixing a predetermined amount of the catalytic powder with poly(vinylidene fluoride) in a ratio of 80:20 and dispersed in n-methyl-2-pyrrolidinone.

Electrochemical performance has been investigated by means of steady state current measurements and cyclic voltammetry. Figure 1 (a) and (b) shows the XRD spectra for the monoclinic La2RuO5 compound and the steady state current measurements for both ruthenates, respectively. The XRD model used is a PANalytical X’Pert Powder diffractometer using Cu kα radiation with a wavelength of 1.54056 Å.

This work is supported by the IGERT-NSF fellowship and partially funded by the US Department of Energy/NETL Oak Ridge Institute for Science and Education (ORISE) fellowship. 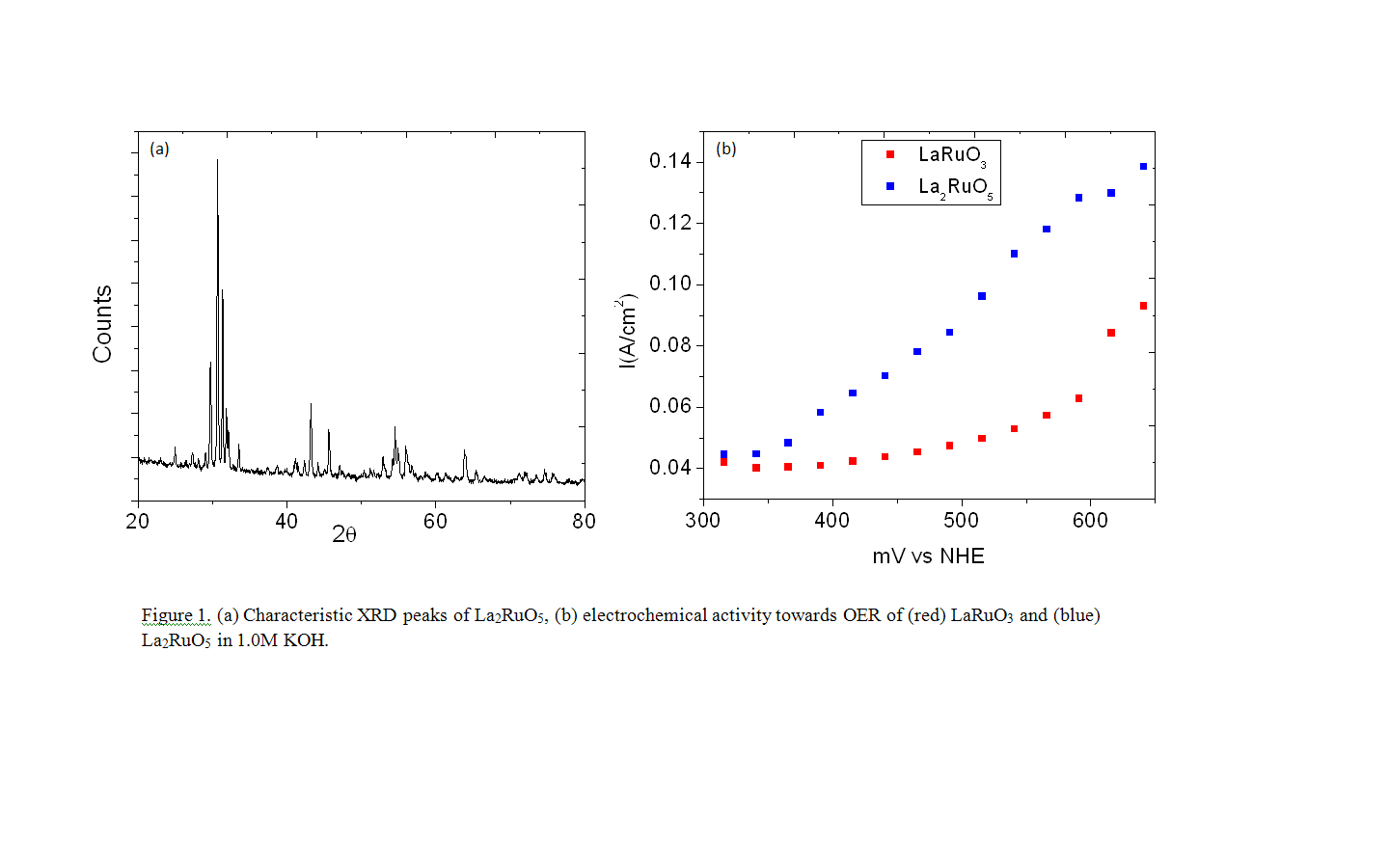