It is generally assumed that the pore in the insulating membrane creates the sensing zone and the height of the blockade current is essentially proportional to the volume of the particle in resistive pulse sensing, which is not greatly affected by particle shape and resistivity, unless in extreme cases. We are interested in studying the transport of phages across the nanopore. The phage is not only important in a wide spectrum of biotechnological applications, but also has interesting physical and electrical properties. It is long rod-like in shape with 6.6 nm in diameter and 880 nm in length, and carries a net dipole moment along its long axial direction contributed from its major coat proteins.

Figure 1 shows the simulated distribution of the electric field across the conical-shaped nanopore with a large-opening diameter of 30 mm, small-opening diameter of 500 nm, and 200 micrometer in thickness. Particles were suspended in phosphate buffer saline (PBS, 1X) and made to pass the nanopore by means of their electrophoretic mobility. Figure 2(a) and (b) show the measured blockade current when a PS bead and a phage were transported through the nanopore, across which a DC voltage of 1.4 volt was applied. Figure 2(c) and (d) show the corresponding simulated blockade currents, which are in good agreement with measured current data. The volume of the phage and the PS bead is calculated to be 0.03 attoliter and 5.0 attoliter, respectively and hence the volume ratio is 0.6%. However, the average measured blockade currents of phages and beads were 0.144 nA (n = 5865) and 1.505 nA (n= 340), respectively. The ratios of the measured and simulated blockade current were 9.5% and 8.9%, respectively, suggesting the phage shape did affect the blockade current produced and gave an apparent volume response 15.8 folds the physical volume.

In summary, a phage passing through a nanopore produced a much larger blockade current than expected by using a simple linear response model, which could be attributed to the conical shape of the nanopore, the orientation and the location of the phage within the nanopore. However, the agglomeration and/or coincident phage passage through the sensing zone may not yet be ruled out. 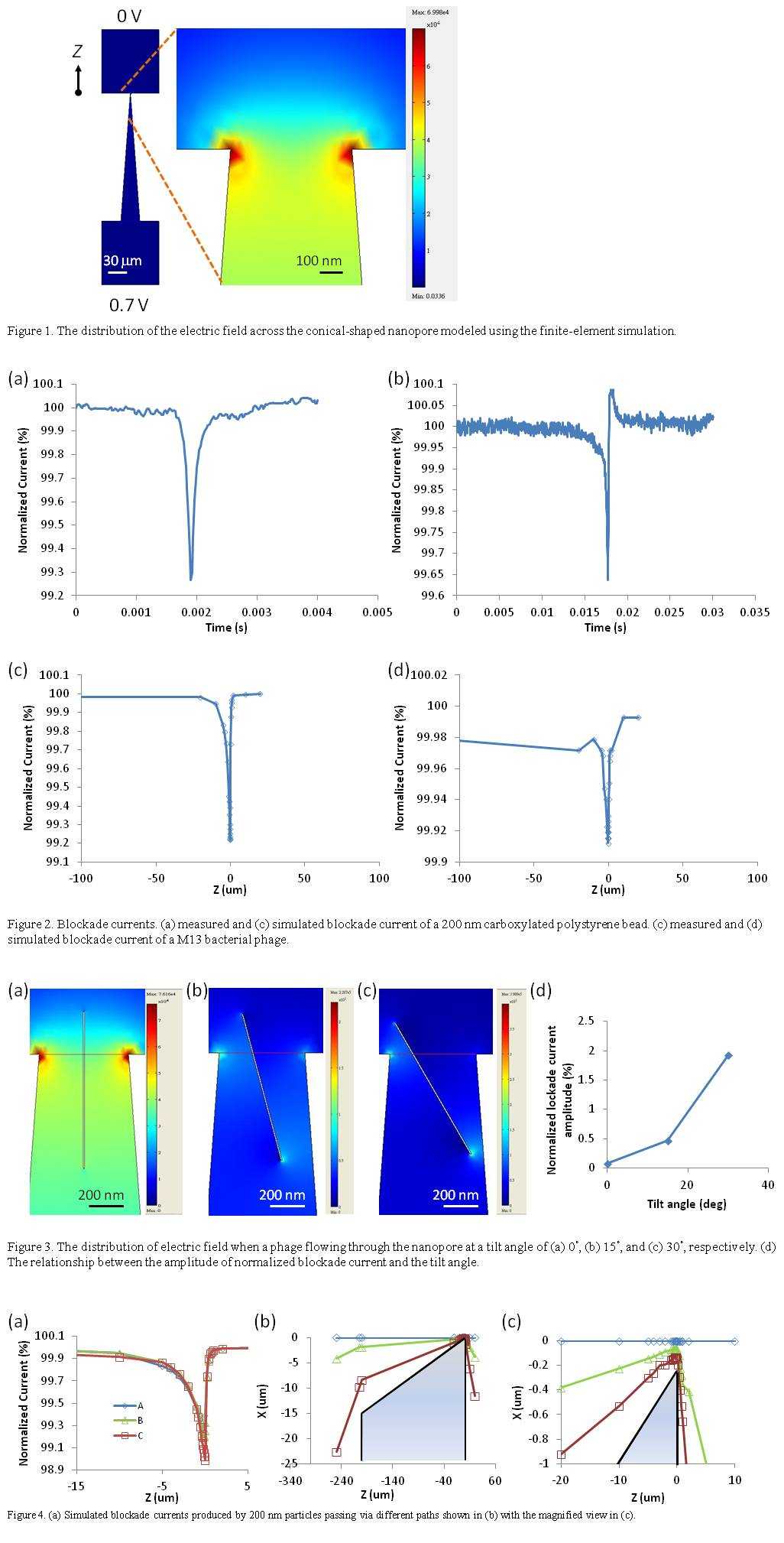