Expo Center, 2nd Floor, Universal Ballroom (Moon Palace Resort)
T. Rogers (RTI International), K. Jackson, M. Flynn (NASA, Mountain View, CA), B. R. Stoner (Duke University), and B. R. Rowe (RTI International)
This research reports the continued development of an electrochemical disinfection (ED) system for the treatment of liquid human waste. The system is a portion of a modular toilet designed for developing countries that will not require piped-in water, a sewer connection or outside electricity. Raut et al. (1) demonstrated the ability of the ED system to completely disinfect synthetic urine spiked with E. coli. This study reports the disinfection and total chlorine production capabilities of the system using field simulated conditions. The ED system is designed to treat liquid waste that has been separated from the solid waste deposited into the toilet.  The effluent will contain urine, a small amount of fecal matter (~ 0.5% w/w), flush water, and cleansing water. This liquid waste will be treated to standards suitable for discharge to soil or for reuse as rinse or flush water.

The ED system was tested with the expected daily output of urine and flush water from one person and the solids/liquids interaction with feces was simulated to obtain the desired fecal contamination. E. coli was chosen as the disinfection indicator with starting concentrations ranging from 2.5 x 104 – 1.4 x 107 MPN/mL. As shown in Figure 1, disinfection was achieved by 110 minutes of processing time at 12 V.

Effective treatment of pathogens is expected to be a function of the production of chlorine containing species and other reactive oxygen species. However, to maintain disinfection in the system after ED treatment, a residual chlorine concentration is desired. Figure 2 shows the total and free chlorine produced over long electrochemical cell run times. Large amounts of chlorine were shown to be produced, however; most is consumed within 24 hours after the cell is turned off.

The ED system has demonstrated effective disinfection of fecal-contaminated liquid waste in simulated field conditions. Continued research will include pilot testing and demonstration of the ED’s effectiveness at killing chlorine resistant pathogens.

Financial support for this work was provided by the Bill & Melinda Gates Foundation. 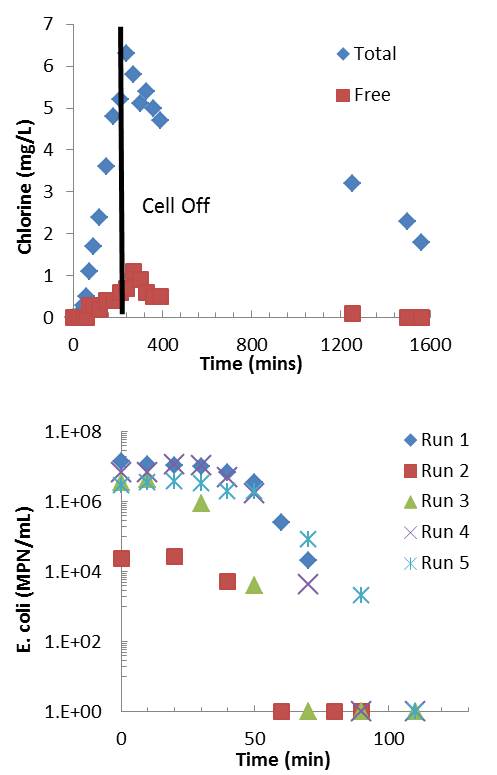