Central to our work will be then encapsulation of dissimilatory metal reducing bacteria for energy generation on the anode of a microbial biofuel cell (MFC) .   We have previously demonstrated both great stability and greater current densities produced Shewanella oneidensis when biofilms of this organism are immobilized on a carbon anode. 1While our published results indicate full operation for a week, one such device was active for a full 6 months in our laboratories, indicating the stability and functionality of such systems.

While DMRBs are able to remove a plethora of organic compounds, including pesticides, inorganic compounds, such as ammonia, phosphate and heavy metals must also be removed to produce clean water.  Immobilized algae have recently been shown to effectively remove phosphorous and nitrogen from wastewater. 2 An advantage of an encapsulated system is demonstrated by the immunity of this system to population fluctuation, the presence of other solids, or competing bacteria that frequently plague phosphate removal in particular.3 Such a system could be combined with, for example, Shewanella oneidensis  in a second module and Geobacter sp.  in a third, and used to produce a self-regererating carbon neutral electrical system.

Alternatively, the Geobacter module could be replaced by a module containing an acetate/methanogen syntrophic community to generate methane.

Research areas for this program will include metabolic activity of constituent organisms upon encapsulation, optimization of the transport characteristics of the encapsulating silica and the integration of electrodes or other energy collection modalities. 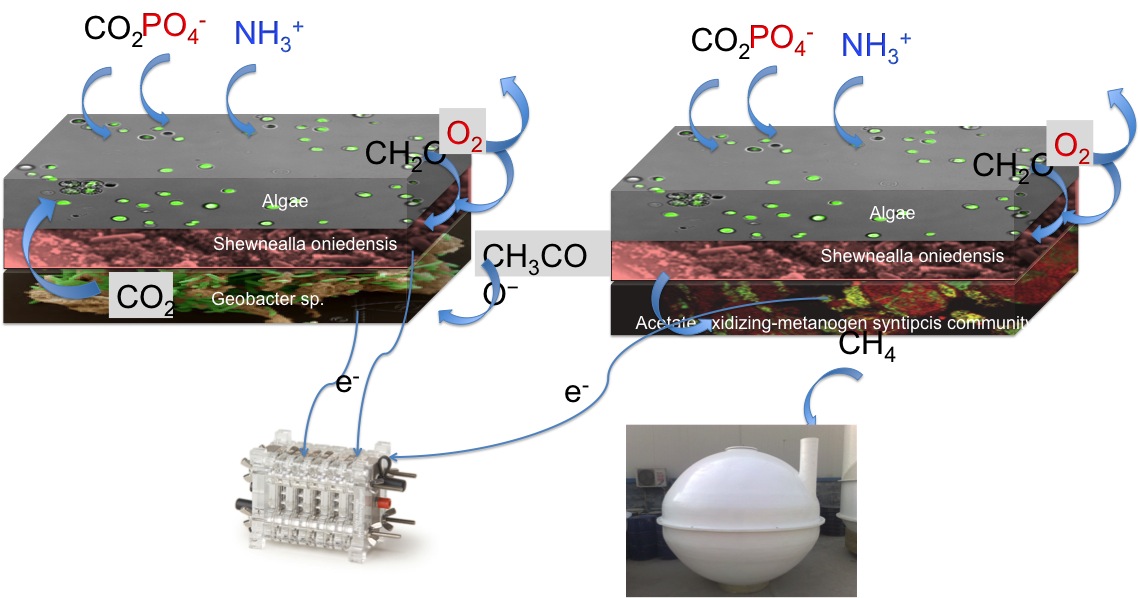