LiCoO2 (LCO) is layered oxide material that is used as a positive electrode material in lithium ion batteries. Structural anisotropy of LCO is expected to have an effect on lithium ion transfer at the electrode/electrolyte interface. In order to understand the effect of the anisotropy on electrochemical properties, we utilized epitaxial growth of the following materials: SrTiO3 (STO) substrate covered with deposited SrRuO3(SRO), followed by deposition of LCO.  Conductive SRO on STO maintains epitaxial growth and serves as a current collector [2]. We used three different orientations for the STO substrate, (100), (110), and (111), which induces (001), (110) and (108), and (104) LCO out of plane orientation. The morphology of the epitaxial film was studied using scanning electron microscope (SEM) and transmission electron microscope (TEM). Lithium ion transfer at the electrode/electrolyte interface, which can be studied with electrochemical measurements, should depend on the films’ surface morphology. Here we report a correlation between electrochemical properties and surface morphology studied by electron microscopy.

LCO/SRO/STO (100), (110), and (111) samples were prepared by pulsed laser deposition in 200 mTorr oxygen pressure using a KrF laser at 650 oC for SRO and  600 oC for LCO. Samples will be referred as LCO/STO (100), (110), and (111), based on the orientation of the STO substrate. Phases and orientation of the films were studied by X-ray diffraction and scanning transmission electron microscopy (STEM). Thin lamellas of the samples for cross sectional TEM studies were prepared by focused ion beam. The lamellas were studied with a TEM operated at 300 kV. Electrochemical measurements were carried out in a three-electrode cell. The working electrode was the LCO/SRO/STO film, which was connected to the current collector with Ag paste on the sides the sample, not in contact with the electrolyte. Lithium metal served as both counter and reference electrodes. All of the potentials are referenced to Li/Li+. Cyclic voltammetry and impedance spectroscopy were carried out in 1 mol dm-3 LiClO4/propylene carbonate (PC). The area of the electrode exposed to electrolyte was defined by an O-ring. Cyclic voltammetry was carried out at 0.1 mV sec-1scan rate, and the potential range was from open circuit voltage to 4.2 V. Impedance spectroscopy was carried out in the frequency range of 100 k – 10 m Hz with amplitude of 10 mV.

A cyclic voltammogram of LCO/ STO (100) is shown in Fig. 1. There was prominent redox peak around 3.94 V, followed by small peaks around 4.06 and 4.19 V. The other orientations, LCO/ STO (110) and (111) also showed similar peaks at the same potentials. From the TEM study, we observed that all of the films grew epitaxially, and the orientation was well controlled. These studies show that we have obtained well structured, electrochemically measurable LCO thin film with three different orientations.

In addition to the lithium charge transfer kinetics, surface film formation and the chemical diffusion coefficient of lithium in LCO will be discussed in the talk. 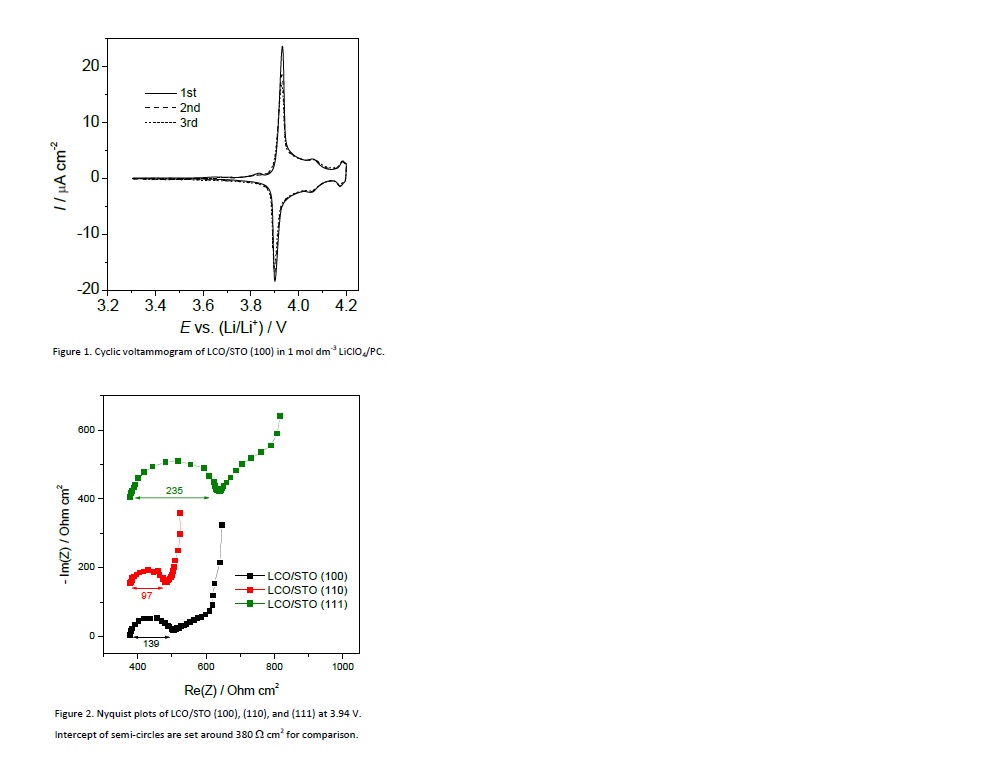