Conference Room 4B (Hilton Chicago)
Y. Y. Chen, J. K. Sheu, W. C. Lai (National Cheng Kung University), and M. L. Lee (Southern Taiwan University of Science and Technology)
In this study, we demonstrated photoelectrochemical(PEC) hydrogen generation using InGaN-based semiconductors as the working electrode for water splitting under solar illumination. For a working electrode made of n-type semiconductor, the holes drive the oxidation of water on the photoelectrode, and the electrons transport within semiconductor and in turn move to the cathode electrode leading to the reduction reaction. Although GaN is potentially resistant to aqueous solution and its energy band is suitable for water photoeletrolysis, GaN only absorbs UV light which is about 5% of the solar spectrum. The bandgap energy of the InxGa1-xN can be tuned from 0.7eV to 3.4eV by changing the Indium content to fit the most of the terrestrial solar spectrum. Therefore, InGaN-based working electrodes for water splitting are expected to be more efficient than the GaN working electrodes.

The working electrodes used in this study featuring meshed metal contacts with SiO2 protection layer were immersed in electrolyte to enhance the collection efficiency of photogenerated carriers. On the other hand, the generation rate of hydrogen could be improved by applying external bias onto the working electrodes to enhance the separation of photogenerated electron-hole pairs in the semiconductor and the charge transfer at the interface between semiconductor and electrolyte during the PEC water splitting process. However, the external bias on PEC water splitting requires extra input power except light illumination. In this study, InGaN-based semiconductors associated with meshed metal contacts were served as working electrodes without external bias to conduct the PEC water splitting process under the light illumination.

Instead of using an external bias provided by power supply, a solar cell was used to raise the driving force to increase the rate of hydrogen production. The solar cell was connected in series between the InGaN-based working electrode and the platinum (Pt) counter electrode to bias the PEC cell. In principle, the water splitting for generating hydrogen involves two mechanisms during the light illumination if the solar cell supplies bias voltage larger than 1.23 V. The mechanisms are photoelectrolysis and electrolysis of water splitting. To solely evaluate the efficiency of photoelectrolysis or electrolysis of water splitting, the output voltage of solar cell was varied through changing the type of solar cell to allow the PEC cell with bias less or larger than 1.23 V. The preliminary results indicated that the hybrid working electrodes exhibited a marked improvement in the efficiency of hydrogen generation.

The detailed results will be presented in the forthcoming conference. 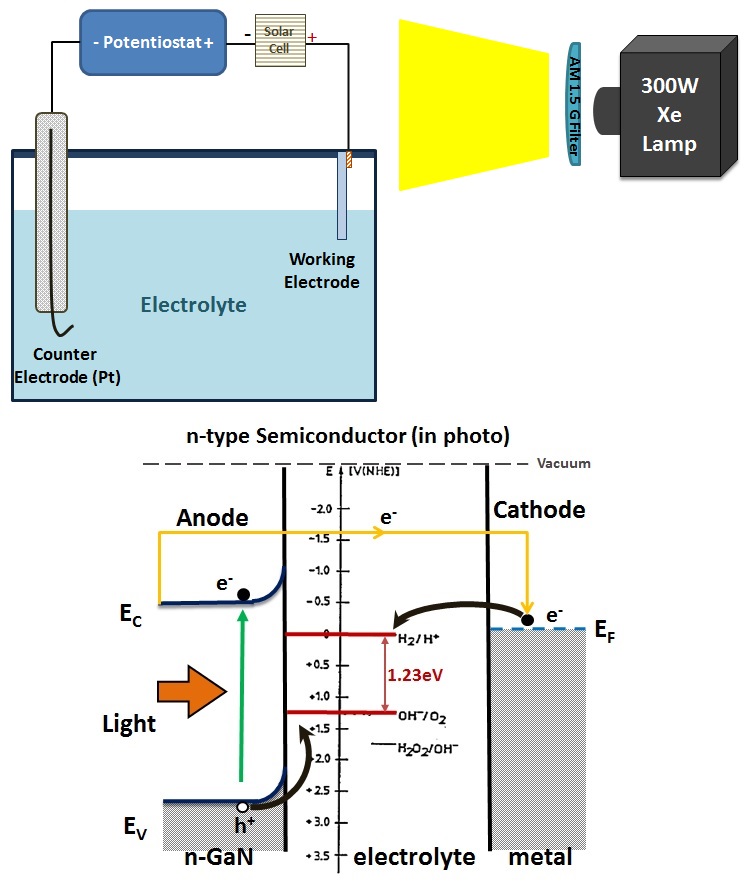