Salon A-1 (Hilton Chicago)
H. Jia (MEET - Münster Electrochemical Energy Technology), M. Winter, and T. Placke (University of Muenster, MEET Battery Research Center)
Germanium (Ge) has received much attention when compared to other alloy anode materials like silicon [1, 2], due to its still high enough theoretical capacity of 1,600 mAh g-1 (4.4 Li+ ions per Ge atom), good lithium ion diffusivity (more than 400 times higher than in silicon at room temperature: 1.41 × 10-14 cm2 s-1 for Si and 6.51 × 10-12 cm2 s-1 for Ge), high electronic conductivity (104 times higher than silicon)[3] and a lower specific volume change during the lithium insertion/extraction process [4]. Nevertheless, the, compared to silicon, tin or other lithium storage metals,  high price of germanium is the major drawback for the commercialization of this anode material.[5] Furthermore, as with silicon, tin and their derivatives [6, 7] severe particle pulverization can be triggered by a large volume change during the lithium alloying (to form LixGe) and de-alloying processes (to reform Ge), which results in electronically disconnected germanium particles as well as a continuous reactivity of the anode with the electrolyte. As a result, the electrode suffers from a rapid capacity fading upon cycling.

Many approaches have been pursued to accommodate the volume changes of germanium, such as preparation of Ge/carbon composites[8], fabrication of Ge-based alloy composites (Sn22/Ge78/Carbon)[9] and designing a special morphology of germanium (e.g. nanoparticles[10], nanotubes[11] and nanowires[12]). In recent years, more attention has been paid to these anode materials to avoid the common problems of ultra-fine powders (especially those with a particle size of less than 100 nm), such as a strong aggregation tendency, which results in increased lithium ion diffusion pathways, their difficulty to handle and an enhanced binder requirement leading to a lower energy density. The basic strategy is that a porous structure can offer sufficient local void space to absorb the volume expansion of alloys like silicon, tin or germanium and thereby to improve the cycling stability. In order to buffer the large volume changes during lithiation/de-lithiation and offer an easier electrolyte penetration route, the concept of this work is to create the active material with a macro-porous structure. Moreover, the open structure of the porous particles is favorable for fast transport of Li+and gives rise to a high charge/discharge rate performance.

In this work, we report a facile synthesis route, i.e. a simple heat treatment procedure, for the formation of three-dimensional porous germanium particles by a magnesiothermic reduction method (2Mg + GeO2 → 2MgO + Ge). The synthesized GeO2 which shows a hexagonal-like morphology with an average particle size of about 700 nm, as shown in the SEM and TEM images in Figure 1a and b, respectively, serves not only as the template, but also as the germanium source in the magnesium reduction procedure. XRD characterization illustrates that it is feasible to obtain germanium via a magnesium reduction reaction between Mg and GeO2. Three-dimensional porous germanium particles, which basically retain the original morphology of GeO2

(Figure 1c and d), can be obtained by this synthesis route. The porous germanium electrode displays a stable reversible capacity of 1,131 mAh g-1 for 200 cycles at 1C and a high rate capability of up to 5C. This great improvement can be attributed to the optimized nanostructure related to the uniformly distributed pores and very thin pore walls in the range of 30 nm. 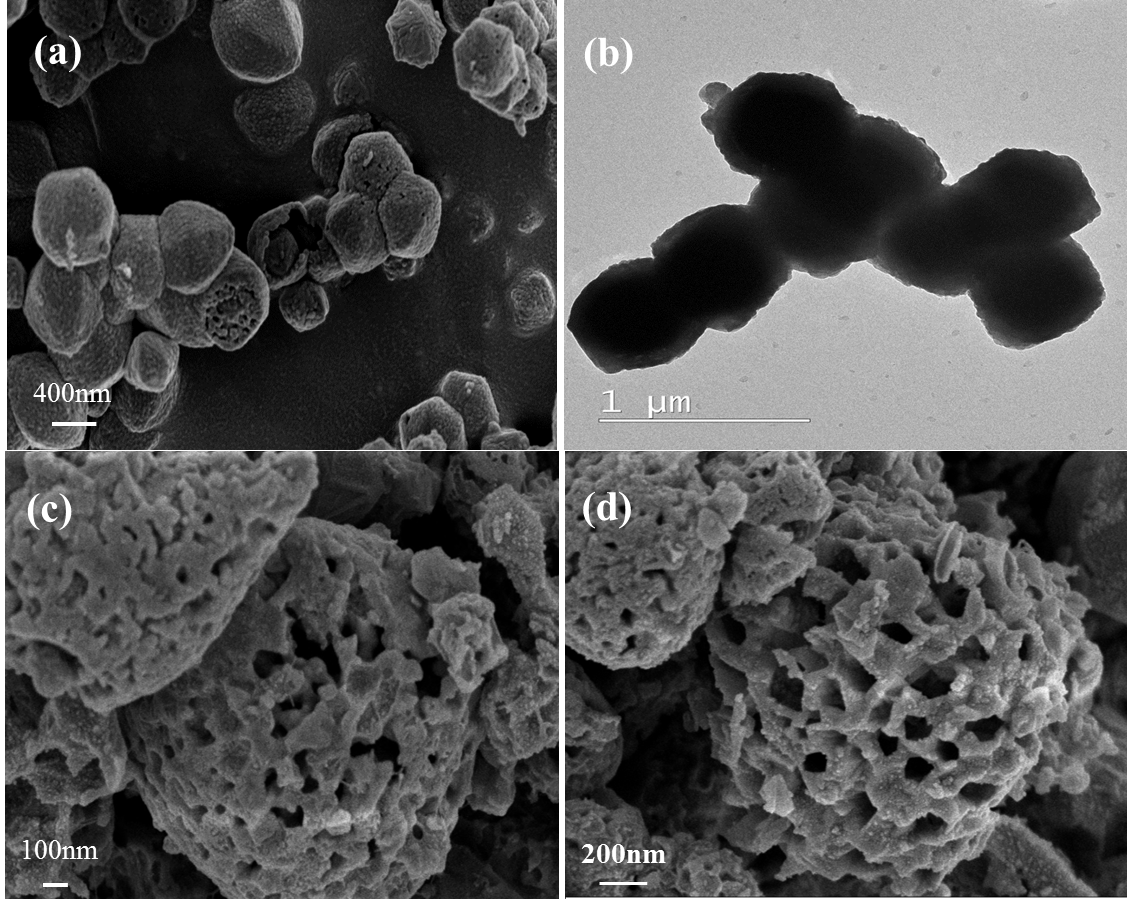