Salon A-1 (Hilton Chicago)
T. Placke (University of Muenster, MEET Battery Research Center), H. Jia (MEET - Münster Electrochemical Energy Technology), and M. Winter (University of Muenster, MEET Battery Research Center)
Regarding the current need for high capacity anode materials in order to further increase the specific energy (Wh kg-1) and energy density (Wh L-1) of LIBs, silicon is one of the most promising candidates. Among different alloying elements, such as tin or aluminum, silicon displays the highest theoretical capacity of 4,200 mAh g-1 (practical: ca. 3,500 mAh g-1) and a relatively low lithiation potential of 0.2 V vs. Li/Li+, compared to the conventional carbonaceous anode materials, displaying a relatively low specific capacity (372 mAh g-1), which cannot meet the growing demand for the next-generation high performance lithium-ion batteries. However, there are some critical drawbacks arising with the use of silicon, which are mainly related to the severe volume changes (up to 300%) during the lithium insertion/extraction process and the low intrinsic electronic conductivity.[1,2] The large stress and strain during lithiation/de-lithiation may lead to particle cracking and even particle pulverization. The volume changes of alloying materials in general also lead to a contact loss between the active material particles and the conductive carbon and/or current collector as well as to an ongoing formation of the solid electrolyte interphase (SEI; dynamic process of breaking off and reforming) and an increase in the overall resistance, thus resulting in an enhanced capacity fading during charge/discharge cycling.[3,4]

Several strategies have been developed in order to reduce the detrimental effects of the large volume changes of silicon and to suppress the side reactions with the electrolyte and thus to improve the long-term cycling stability.[3] One main approach is to reduce the silicon particle size to the nanometer range, while several material structures, including e.g. nanowires[5], nanospheres[6] and nanotubes[7], have been proposed. In addition, another strategy is to design porous structures, e.g. macroporous (pore width ˃ 50 nm) or mesoporous materials (pore width of 2 to 50 nm), that can offer sufficient local void space to absorb the volume expansion of silicon and thus to enhance the cycling stability.

A further main strategy to improve the electrochemical performance of silicon is the formation of multiphase composite materials, i.e. by introducing a second or more components, which display no or only less volume changes as well as preferentially a high electronic conductivity. The idea of this approach is to use the host matrix to buffer the volume changes of silicon and thus to maintain the electrode integrity and electronic network. Examples are silicon-carbon composite materials, e.g. silicon particles dispersed in a carbon composite matrix[8], and silicon-based alloys or composite heterostructures, such as Si/SiOx/carbon composites[9], or intermetallic compounds like Si/TiSi2[10] or NiSi alloys[11].

In this work, we report a facile synthesis route for a porous core-shell NiSi2/Si/carbon composite material and its electrochemical characterization as anode material for lithium-ion batteries.  The as-prepared composite material consists of NiSi2, silicon and carbon phases, in which the NiSi2 phase is embedded in a silicon matrix having homogeneously distributed pores, while the surface of this composite is coated with a carbon layer (Figure 1). The electrochemical characterization shows that the porous and core-shell structure of the composite anode material can effectively absorb and buffer the immense volume changes of silicon during the lithiation/de-lithiation process. The obtained NiSi2/Si/carbon composite anode material displays an outstanding electrochemical performance, which gives a stable capacity of 1,272 mAh g-1for 200 cycles at a charge/discharge rate of 1C. The simple and high-yield synthesis process, using cheap and abundant raw materials, makes it more competitive for industrial applications. 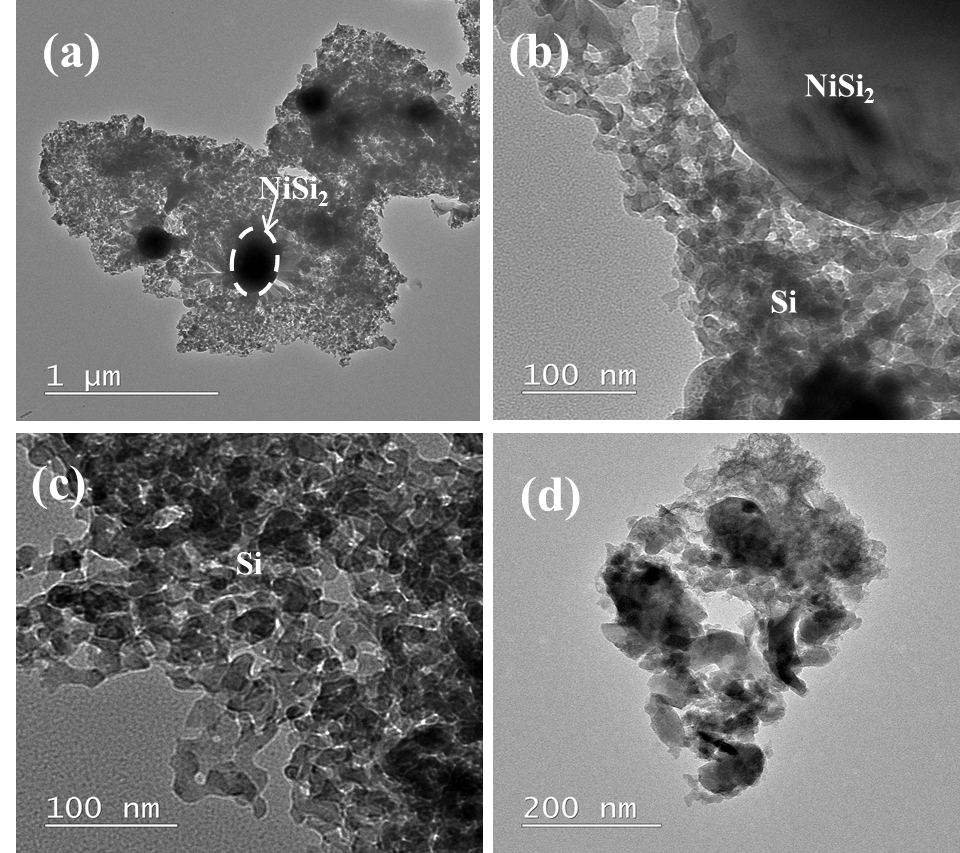