Pt-based electrocatalyst is considered to be the most efficient materials in direct methanol fuel cells [1].  However, the high cost of noble metals inhibits their application in fuel cells on a large scale.  Therefore, the effort to finding out an abundant, inexpensive and efficient electrocatalytic material is of great significance.  Zeolite, composed of silicon-aluminum oxides, is well known for its ion exchange property, adsorption with of acidic protonic entities and porosity on its surface, making it more hydrophilic and facilitating the diffusion of analytes into the film of electrode surface as well as the enhancement of active area [2,3].  Furthermore, the lower resistance and less ohmic power losses can be obtained when zeolite is used as electrode materials. 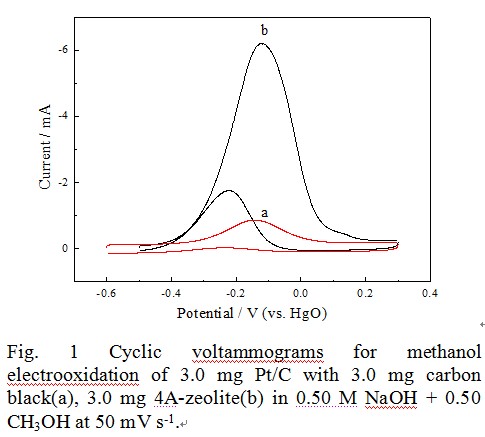