Williford Room A (Hilton Chicago)
V. Armel, D. Jones, and F. Jaouen (Institut Charles Gerhardt Montpellier UMR CNRS 5253)
While the Proton Exchange Membrane Fuel cell (PEMFC) technology is gradually entering the portable and materials handling vehicle markets, its long term future is subject to further advances in electrocatalysis and to the cost of precious metal catalysts. Today, platinum is used at both the anode and cathode to catalyze the electrochemical reactions, although in much greater amounts in the latter due to the slower Oxygen Reduction Reaction (ORR). Recent non-precious metal catalysts synthesized from a transition metal (Fe, Co), a nitrogen and a carbon precursor have shown unprecedented high activity for the ORR [1-2]. Promising results with metal-free conducting polymers and nitrogen doped carbons have also been reported for catalyzing the ORR in alkaline medium. While metal-free catalysts with high ORR activity in acid medium have been claimed recently, measuring the presence of trace amounts of iron in supposedly metal-free samples is crucial but rarely carried out with experimental techniques that are sensitive enough [3]. The goal of the present work is to assess the role of iron on the ORR activity of MOF derived catalysts and to investigate whether the highest ORR activity observed after NH3 pyrolysis comes from a true synergetic effect between N-groups and Fe-based centres, or simply comes from the mathematical addition of the intrinsic activity of N-groups on one hand and Fe-based centres on the other hand. The latter hypothesis implies that the ORR activity of such N-groups in acid medium would be commensurate with that of the Fe-based centres, which has never been demonstrated in acid medium so far.

In this work, Fe-N-C and N-C catalysts were synthesized by pyrolyzing a commercial ZIF 8 and phenanthroline, with or without addition of iron acetate, respectively. Pyrolysis is performed in Ar, or in Ar and then in NH3. The exact Fe contents in the catalysts were measured from the height of the absorption step at Fe K-edge, using X-ray absorption spectroscopy. Various sources of iron contamination for the N-C samples are investigated, such as quartz tube cleanness, pyrolysis gas (NH3 is a corrosive gas) and C and N precursors (commercial ZIF-8, phenanthroline). Figure 1 shows the polarization curves measured in fuel cell for samples pyrolyzed in Ar (open symbols) or in Ar+NH3 (filled symbols). Two observations can be made: i) The ORR activity enhancement between samples obtained from 0%Fe/0%phen/MOF and 1%Fe/20%phen/80%MOF is circa 30 after Ar-pyrolysis (open triangle vs open diamond), in relative agreement with Fe bulk contents of ca 0.03 and 3.0 wt %, respectively ii) the same factor is only circa 4 after Ar and NH3 pyrolysis (filled triangle vs filled diamond), this time in contradiction with the Fe bulk contents of ca 0.07 wt % and 6 wt %, respectively.  The high ORR activity of ZIF-8 pyrolyzed first in Ar and then in NH3 either comes from specific N-groups formed during NH3 pyrolysis, or from Fe traces present in the commercial MOF or unintentionally added during the synthesis. Several possible sources of Fe traces, such as contaminated quartz tube, ballmilling process, types of gas used for pyrolysis, or purity of the MOF precursor were investigated and will be discussed. 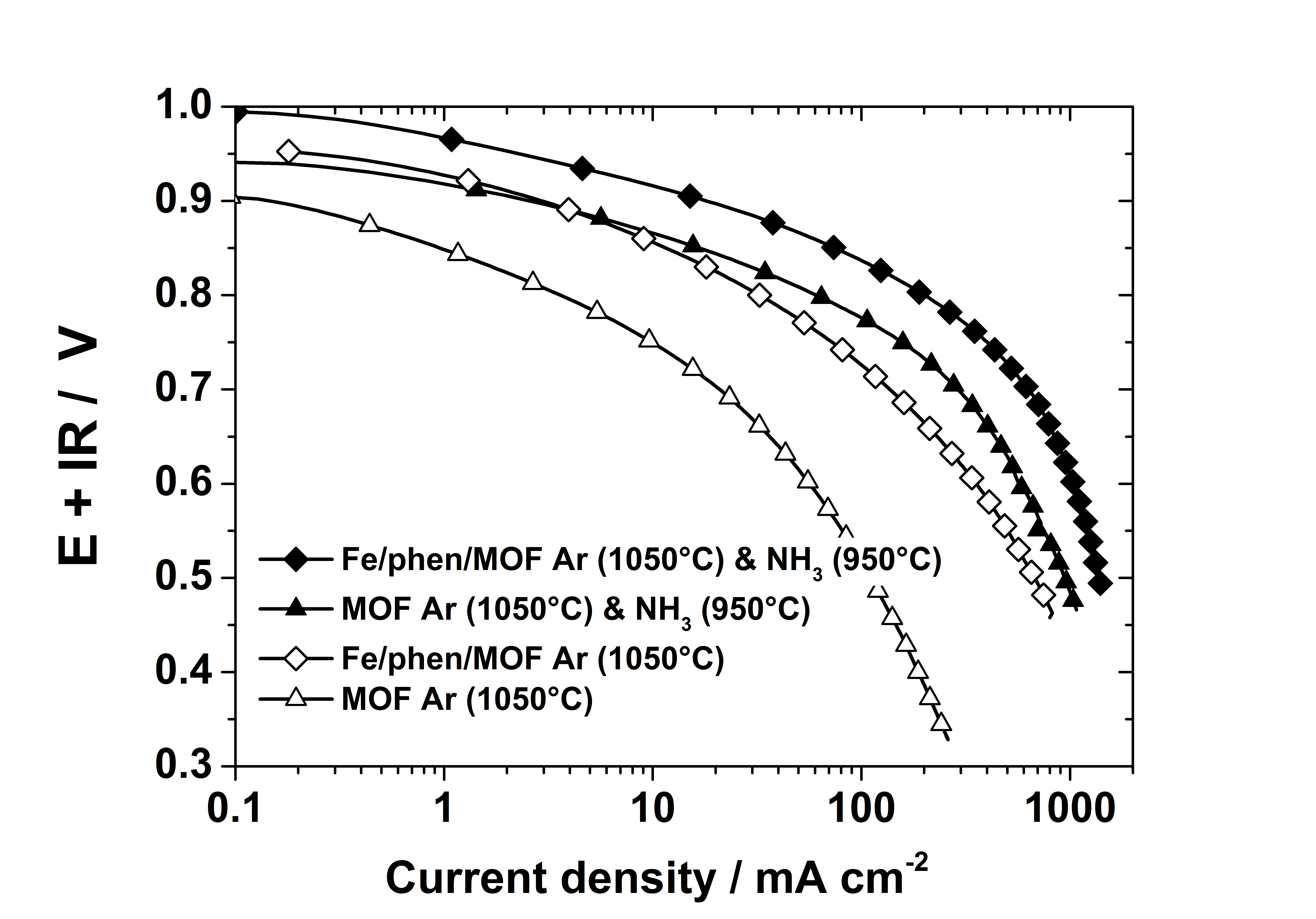