Salon A-3 (Hilton Chicago)
K. Soeda, M. Yamagata, and M. Ishikawa (Kansai University)
Magnesium (Mg) is considered as a candidate material for next generation energy storage systems due to their strong advantages such as relatively high negative reduction potential, low cost, abundance, divalent nature.[1, 2] Since the Mg is stable under air condition, safety concern of battery must be significantly improved compared to that using alkali metal or alkaline earth metal. Moreover, non-dendrite nature allows the use of Mg metal as an anode directly. Mg batteries could provide high theoretical volumetric energy density of over 3833 mAh cm-3, which is about twice as high as that of LIBs (ca. 2046 mA cm-3).[3] However, their practical use has not achieved yet because the presence of passivation layer that difficult to remove and is easily reproduced even in aprotic solvents.[4] Actually, it is difficult to realize deposition and dissolution of Mg in aprotic solvents with simple salts such as MgCl2 or Mg(CF3SO3)2.[5] Only a few electrolytes based on ethereal solvents can exhibit reversible deposition and dissolution of Mg, such as Grignard reagents (RMgX, R = alkyl, aryl groups and X = Cl or Br).[6] Another effective strategy was demonstrated by Aurbach et al. that organohaloaluminate salt in ethereal solution allowed Mg to deposit and dissolve reversibly with high efficiency.[7] Considering the practical use, however, high volatility of ethereal solvents as well as high reactivity of the electrolyte salt could be undesirable from the view point of the thermal stability and safety.

The electrochemical measurements were carried out on two-electrode type cell (HS cell, Hohsen Corp.); this cell is a basically coin-type cell with minimum volume of electrolyte and can be used repeatedly. Ni disk with 13 mmφ and disc-shaped Mg metal with 13 mmφ were used as a working electrode and counter electrode respectively.

Fig. 1 shows cyclic voltammogram at first cycle of Mg deposition and dissolution on Ni plate in the Mg-ion electrolyte. It is clearly observed that the typical anodic and cathodic current peaks of metal deposition-dissolution which related to the electrodeposition of Mg on Ni plate. The value of anodic and cathodic peaks over 1.5 A cm-2. This large current peaks must be derived from using HS cell; distance between the working electrode and the counter electrode is very short compared to beaker cell, thus, it helps to maintain adequate amount of Mg ion near the working electrode. Although the separator made of polyolefin exist between the working and counter electrodes, it do not hinder the reversible deposition and dissolution of Mg. Note that linear response in the anodic sweep was clearly observed even at room temperature, indicating that no overvoltage is necessary for dissolution of Mg on Ni plate. This results suggest that the Mg-ion electrolyte could be a promising candidate for rechargeable Mg battery.

Fig. 1 Cyclic voltammogram of Mg deposition and dissolution on Ni substrate in Mg-ion electrolyte at scan rate of 20 mV s-1. 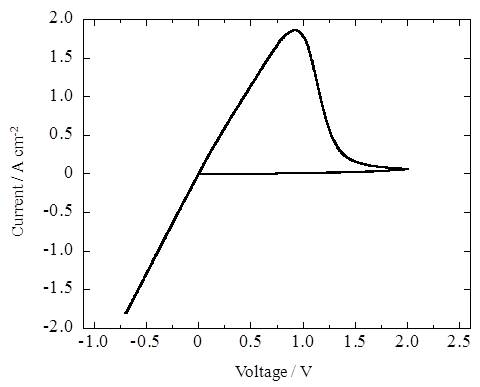