However, there are manifold problems concerning cell chemistry, reaction kinetics and cycleability of Li-air cells. In this study, a mixed aprotic/aqueous Li-air cell with a Li3xLa2/3‑xTiO3 (LLTO) solid electrolyte was characterized in a new interface-cell setup. This setup is capable to analyse the polarization contribution caused by the liquid/solid interface between the solid electrolyte and different liquid electrolytes.

The cell design is inspired by Abe et al. [2], consisting of two compartments, which are in contact with the solid electrolyte. Four-point electrochemical impedance measurements are performed using two electrodes on both sides. The excitation signal is applied on the outer working electrodes (WE, CE) and the voltage is measured between the inner reference electrodes (RE1, RE2). The impedance spectra are further processed by calculating their distribution of relaxation times, to clearly separate the different processes [3].

The special cell design allows a selective investigation of a single liquid/solid interface process by assembling different symmetric cells, using the same liquid electrolyte in each compartment. By changing the ratio of conducting salt to solvent (Fig. 1), we clearly defined the interface process in a frequency range from 102 Hz to 103 Hz and determined an activation energy of 0,44 eV. Furthermore, the interface process is a major contribution to the overall polarization, which even exceeds the contribution of bulk electrolyte and grain boundary for low lithium concentration and low pH‑value. 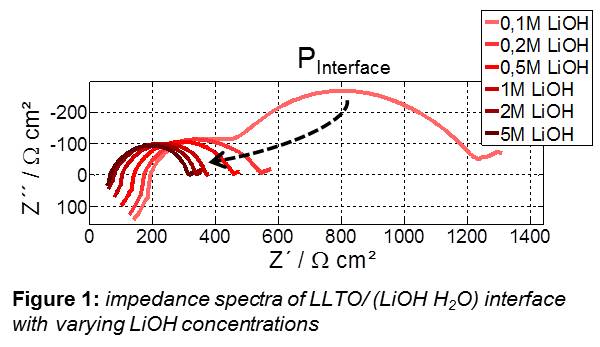