As PEMFCs have evolved for transportation applications from prior applications (space and stationary), materials changes have been made to increase the power density and decrease the cost (including thinner, higher conductivity membranes and higher surface area/lower Pt loadings) that have negatively affected the durability.  In addition, as these systems were developed for transportation, the operating conditions changed, including frequent start-up/shut-downs, power cycling, and higher temperature/lower relative humidity operation.

While there has been significant progress in improving durability with lower cost materials, further improvements are needed to meet the commercialization targets. Past improvements have largely been made possible because of the fundamental understanding of the underlying degradation mechanisms. By investigating component and cell degradation modes and defining the fundamental degradation mechanisms of individual components and component interactions, new materials can be designed to improve durability.

The primary degradation modes involve materials in the the electrode layer.  The high cost of the noble metal(s) used as the catalyst makes this a crucial area requiring durability improvement. Other degradation modes include decreases in electrode kinetics and increases in resistance of both transport and conductivity.  Although the electrode structure and durability thereof has been studied extensively, perfect solutions for commercialization do not yet exist.

The primary degradation mechanisms within the cathode catalyst layer include catalyst nanoparticle stability, catalyst support degradation, porosity losses, and ionomer degradation. Catalyst support carbon corrosion occurs under normal fuel cell operating conditions and is exacerbated by the voltage cycling inherent in transportation drive cycles.  An example of how the drive cycle potential cycling affects carbon corrosion, as measured by CO2 evolution, is shown in Figure 1.  The peak in CO2 evolution occurs when the cell potential increases from high power operation to low power near open circuit.  This correlates with when CO2 evolution is observed during cyclic voltammograms, which occurs during the positive sweep at  ~ 0.55 to 0.60 V.  The evolution of this CO2 peak suggests that oxygen is adsorbed onto the carbon and/or CO is formed on the Pt surface.

However, as Figure 2 demonstrates, carbon corrosion is only a portion of the issues in play.  Figure 3 shows the initial and final Pt particle sizes for the same carbon support materials.  In this case, the Pt size (measured by XRD) is inversely correlated to the amount of carbon corrosion, with the greatest Pt size observed after shut-down/start-up ageing for graphitized LSAC carbon. 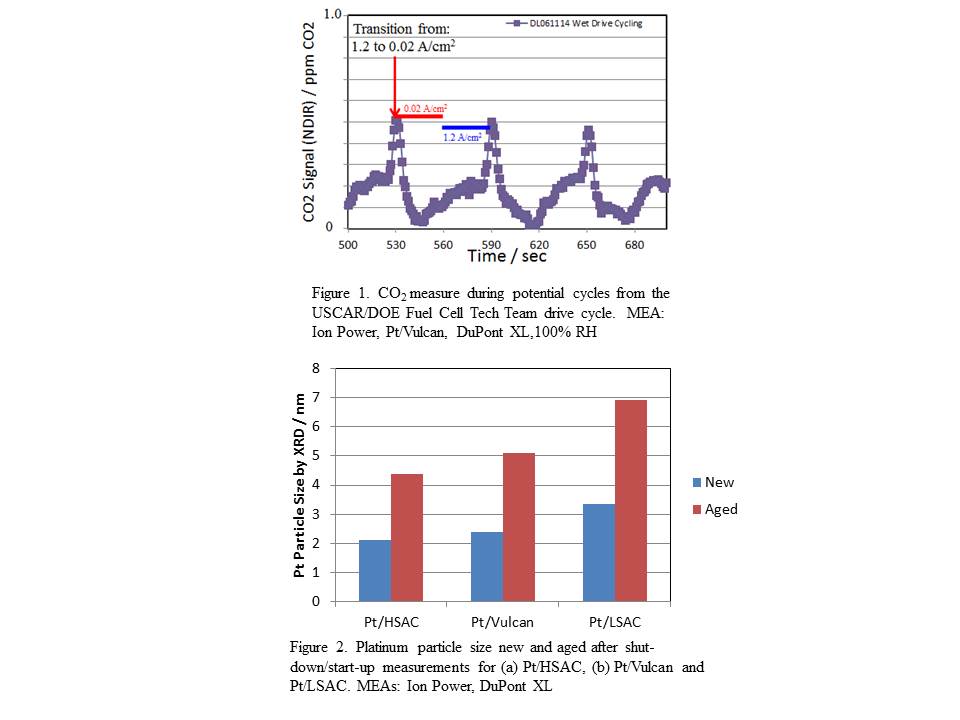