Conference Room 4G (Hilton Chicago)
A. Z. Weber (Lawrence Berkeley National Laboratory), J. T. Gostick (McGill University), A. Kusoglu, and A. R. Crothers (Lawrence Berkeley National Laboratory)
One of the keys to optimizing polymer-electrolyte-fuel-cell performance is understanding its transport phenomena. This is especially important for the proton-exchange membrane, which helps to control the water management within the cell, an integral aspect for optimal cell performance. Typical fuel-cell membranes are perfluorosulfonic-acid based and are essentially random copolymers that phase separate into hydrophilic domains for water and ion movement supported by a hydrophobic backbone phase.

We have previously shown that water transport and uptake at the nano- and macroscale is similar and relatively fast in membranes, especially at higher humidities.1,2 Once water crosses the membrane interface, time-resolved studies show that changes at the nano and macroscale scales occur almost simultaneously. Unlike water incorporation, proton conduction depends not just on the domains but also their interconnectivity. Time-resolved studies such as that in Figure 1, show that unlike the water incorporation, there is more of a time delay due to reorientation of the domains and the transport pathways. In this talk, such issues will be discussed.

In particular is the need to explore the structure-function relationships for the transport properties and the critical aspects that the membrane interface plays in controlling transport. In addition to experimental results, a model methodology will be presented to explore proton conductivity. In the model, we propose a macroscopic treatment that utilizes data on the nanoscale relating to membrane morphology and physically relevant phenomena,3 but in a framework that still allows for easy incorporation into cell-level fuel-cell models. Extensions of the analysis and phenomena to the thin-film regime, which is critical for fuel-cell catalyst layers, will also be presented.

We thank Steve Hamrock, Mike Yandrasits, and Greg Haugen at 3M for providing membranes and discussion; This work made use of facilities at the Advanced Light Source (ALS), supported by the Office of Science, Office of Basic Energy Sciences, of the U.S. Department of Energy. This work was funded by the Assistant Secretary for Energy Efficiency and Renewable Energy, Fuel Cell Technologies Office, of the U. S. Department of Energy under contract number DE-AC02-05CH11231. 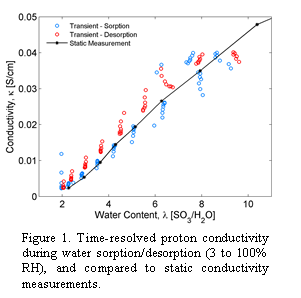