PDR 2 (Hilton Chicago)
H. Fritze (Clausthal University of Technology, IEPT)
Piezoelectric single crystals of the langasite family exhibit piezoelectrically excited bulk acoustic waves up to temperatures of about 1400 °C. Therefore, the materials show the potential to be operated as resonant microbalance at extremely high temperatures. Such piezoelectric transducers enable, for example, film deposition monitoring or gas sensing by determination of atmosphere dependent mass changes of thin films already deposited on the resonators. Further, langasite based surface acoustic wave devices are increasingly operated at elevated temperatures. Consequently, the stability and operation limits of these crystals need to be determined and correlated with the transport kinetics of the constitutive elements and of dopants.

In this work, the high-temperature stability of the piezoelectric single crystals CTGS (Ca3TaGa3Si2O14) and LGS (La3Ga5SiO14) is reviewed and related to their defect chemistry and the atomistic transport processes occurring in the crystals.

First, the resonance frequency of CTGS and LGS bulk acoustic devices is determined up to temperatures as close as possible to their ultimate operation limit which is the melting point. The figure shows the relative frequency shift in comparison to common piezoelectric crystals such as quartz. It is obvious that the maximum operation temperature of langasite type crystals exceeds that of quartz significantly.

The diffusion coefficients of oxygen and hydrogenous species follow from tracer diffusion runs and subsequent secondary ion mass spectrometry as well as optical absorption spectroscopy. The electrical conductivity is determined by impedance spectroscopy as function of temperature, oxygen partial pressure and crystal orientation. Key issues limiting the high-temperature operation are the evaporation of gallium, the formation of oxygen vacancies and the incorporation of hydrogen. For example, a dominant role of hydrogen is observed in hydrogenous atmospheres since the diffusion coefficient of hydrogenous species is orders of magnitude higher than that of oxygen.

Further, the loss mechanisms are correlated with the transport kinetics. Its effect on the electromechanical properties such as mechanical stiffness, piezoelectric and dielectric constant, effective viscosity and electrical conductivity is evaluated. Thereby, the electromechanical properties are extracted from resonance spectra using a one-dimensional physical model. The viscoelastic damping in langasite, expressed as viscosity, governs the total loss up to about 650 °C. Between 400 and 650 °C, the temperature dependence of the property can be described by a single activation energy. Above about 600 °C, the electrical conductivity impacts the total loss noticeable. In contrast, the loss in CTGS is virtually not affected be the conductivity. In addition, the damping of the piezoelectric devices is determined by monitoring the amplitude of the displacement by laser vibrometry. Comparing CTGS and LGS, the former shows significantly lower losses at high temperatures which is caused to some extent by its fully ordered structure.

Finally, application relevant aspects such as use of piezoelectric resonators are briefly presented. One example is the determination of thermodynamic properties of thin films. 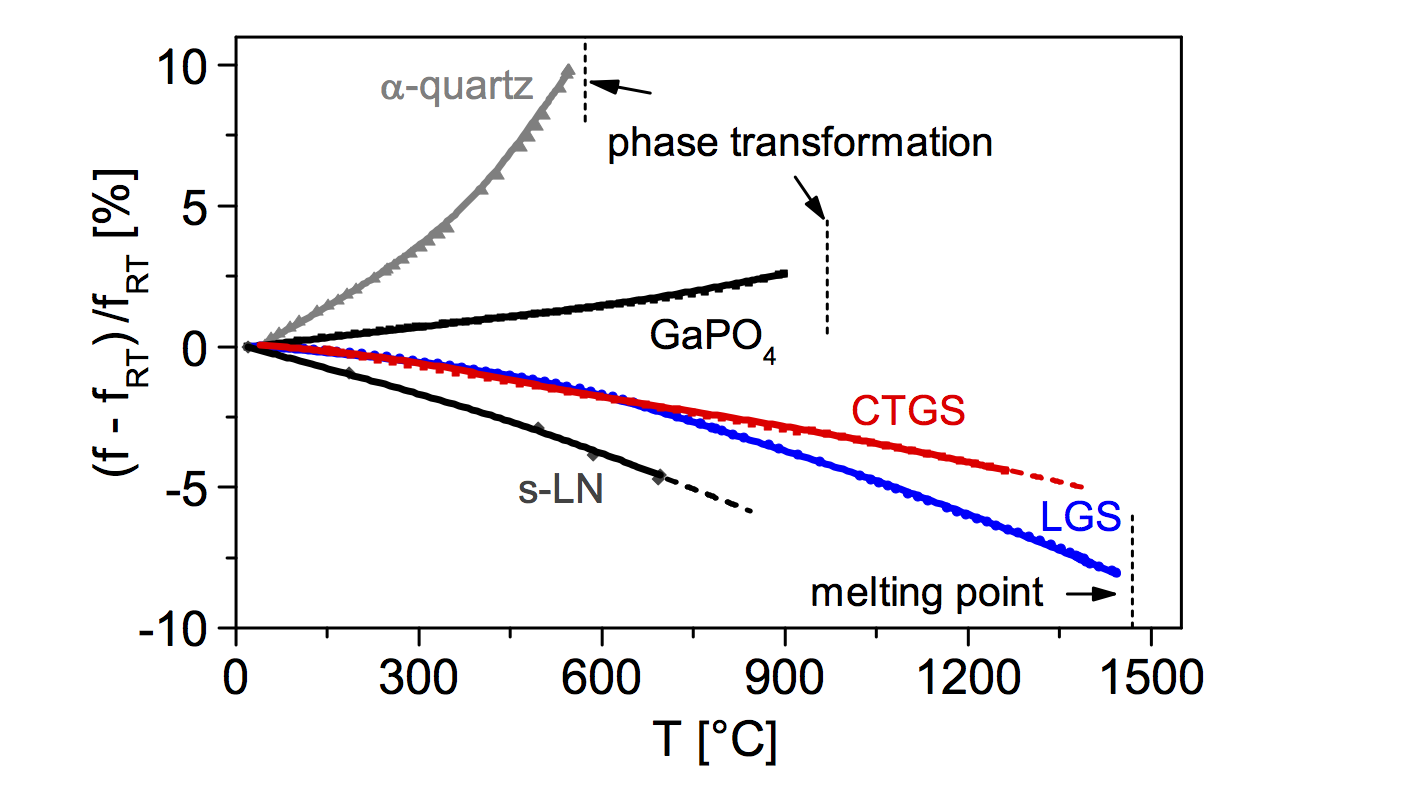