Williford Room A (Hilton Chicago)
E. Bertin, S. Garbarino, C. Roy, and D. Guay (INRS-EMT)
The electrochemical reduction of CO2 has the potential to offer an elegant approach to the reduction of greenhouse gas emissions, while also providing diverse chemicals useful in organic synthesis or as liquid fuels for renewable energy storage.[1, 2]

Copper is the most extensively studied catalyst nowadays for CO2 reduction as it is currently the only known metal to produce significant amount of hydrocarbons and alcohols such as ethanol, ethane or ethylene.[3] Unfortunately, the selectivity and stability of copper electrodes are rather low.[4] Other well known catalysts, such as Pt, Ni, Co or Fe have low selectivity for CO2 reduction and produce mostly H2.[5] On the other hand, catalysts such as Hg, Cd, Pb or Sn, which are poor hydrogen evolution catalysts, displayed interesting selectivity for CO2 reduction to formate. Unfortunately, they do so at high overpotentials.[6]

Recently, single crystals studies showed that Pt(111)-Bi displayed an higher activity than Pt(111) itself for CO2 reduction at low overpotentials (between -0.64 and -1.04V vs SCE).[7] Combined with the high activity of Pt(111)-Bi catalysts for formic acid oxidation, this suggests that these catalysts could act as bifunctionnal catalysts, i.e., active for both the oxidation of formic acid to CO2and the reverse reaction. Unfortunately, the products formed were not identified in this study.

As expected, on bare preferentially (100) oriented Pt thin film, the main product is H2for the whole range of potential investigated. This holds true when a monolayer of Bi is added onto the Pt surface.

However, thicker Bi deposits prepared by electrodeposition at -0.21V displayed improved current efficiency for the production of formate. For these deposits, formate production at -1.6V increases from 20% for a deposit of 0.1C/cm2 to 74% for a 5C Bi deposit. This value is slightly lower than for bulk Bi deposits obtained by potentiostatic electrodeposition on titanium at -0.21V, which reached an 82% faradic efficiency at -1.5V. On the other hand, the overall current density at -1.5 V modestly increases from -2.2 mA/cm2 at bulk Bi to -2.9mA/cm2at a 1C Bi deposit on a preferentially (100) oriented Pt  thin film, likely due to an increase of active surface area.

The influence of the Bi deposition charge and surface orientation on the electrocatalytic performances for CO2reduction, as well as the durability of the catalyst will be further described in details. 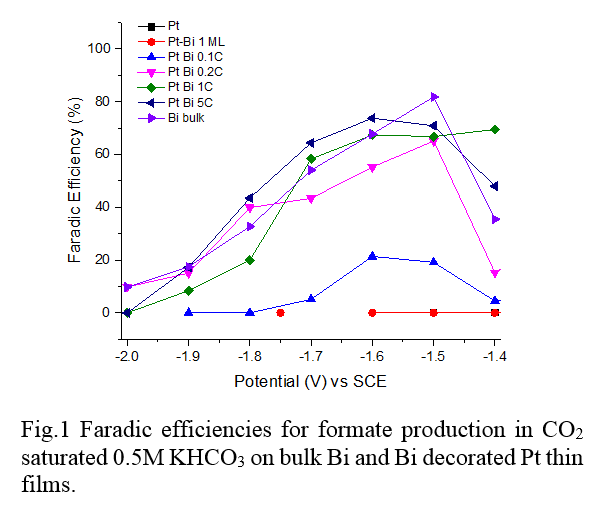