313
Investigations of Lithium-Sulfur Batteries at Low and High Temperatures

The research of lithium-sulfur (Li-S) batteries keeps growing motivated by its high theoretical energy density (around 2600 Wh kg-1) and the continuous improvement on the cycling stability, like it has been gained in the last five years [1,2]. In situ and ex situ techniques have been already developed to get a deeper understanding on reaction mechanisms and degradation processes [1-5]. However, only few studies investigated the behavior at temperatures below and above ambient [6,7].
In this work, Li-S batteries were investigated in a temperature range between -15 °C and 75 °C. The cathode consisted of a simple carbon/sulfur composite and lithium foil was used as anode. Two electrolytes were investigated: 1 M Lithium bis(trifluoromethane sulfonyl) imide (LiTFSI) in DOL:DME (1:1, v:v) with and without LiNO3. Electrochemical impedance spectroscopy was chosen as principal characterization technique to evaluate the influence of the temperature on the electrochemical and degradation processes. The resistance of electrolyte, charge transfer resistance in the electrodes, as well as the dissolution and precipitation of the end products (sulfur and lithium sulfide) were analyzed by modelling the experimental results with an equivalent electric circuit. Furthermore, the function of the already known electrolyte co-salt LiNO3 to avoid the shuttle mechanism was evaluated in a wide temperature range. The results show that the “protective” effect of LiNO3 is negatively influenced by extreme temperatures. Moreover, morphology and structural changes in the sulfur/carbon composite cathode were analyzed using ex situ scanning electron microscopy (SEM) and X-ray diffraction (XRD), respectively. 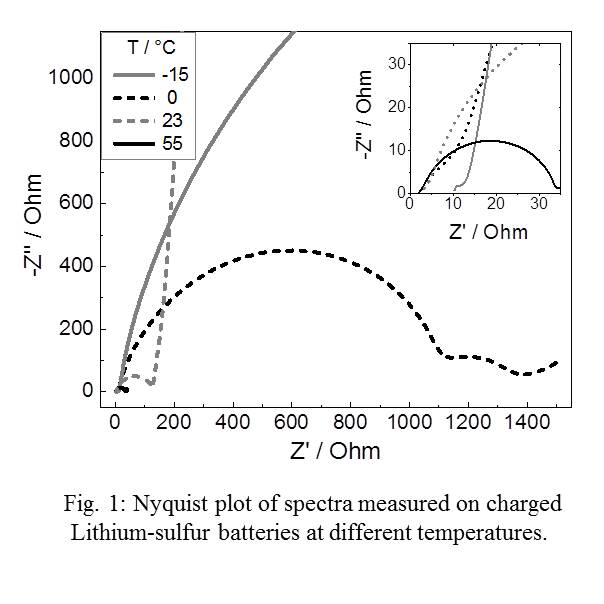