Salon A-1 (Hilton Chicago)
M. Rashid and A. Gupta (Indian Institute of Technology Delhi)
Lithium-ion batteries (LIBs) are being considered as portable power sources for modern electric and hybrid vehicles due to their high gravimetric and volumetric energy density. However, the discharge capacity of LIBs decreases with continuous cycling due to various associated side reactions. The intensity of degradation caused by side reactions might be reduced through control of design and operational parameters i.e. charge & discharge rate, operational voltage, electrode thickness and particle size. Mathematical modeling is an important tool to analyze the effect of these variables on the performance of LIBs, while measuring their influence through experiments is difficult and expensive. In a recent study1, a mathematical model was developed to quantify the solid-electrolyte interface (SEI) film thickness and gas volume in a carbon electrode for different discharge rates up to a 1000 cycles; however, it was assumed that the carbon electrode is composed of identical particles. In this work, the model developed in ref. [1] is being extended to analyze the effect of cycling lithium-ion cells with carbon negative electrodes having different particle configurations and to observe the impact of electrode morphology over cell performance.

For this purpose, the carbon electrode will be split into three equal sub-parts such that within each layer particles of the same size exist. The radius of particles is either 0.7Rp, Rp or 1.3 Rp (so that the interlayer sizing is non-uniform), where Rp is radius of the reference case considered in ref. [1]. All possible combinations of the final electrode morphologies to be considered are shown in Fig. 1. One representation of fresh and cycled negative electrode is shown in Fig. 2, with smallest particle section sandwiched between medium and largest particle layers at the current collector and separator ends, respectively. As is given in Eq. (1), cycling of the cell results in the decomposition of the electrolyte at the negative electrode leading to SEI film formation and generation of ethylene gas as a by-product of the side reaction. The SEI film increases the resistance for lithium diffusion in the carbon active material and the gas generated occupies the space previously occupied by the pores of the electrode (as shown in Fig. 2) slowing the movement of Li-ions in the electrolyte, both leading to reduction in cell capacity.

The governing equations of the pseudo-2D model2-3 along with SEI formation and gas evolution1 will be solved using COMSOL Multiphysics 4.3a for all morphologies of MCMB anode shown in Fig. 1 with LiMn2O4 cathode. The cell will be cycled till either of 80% loss (end of life) of rated capacity or 1000 cycles is reached. A comparative analysis of discharge capacity, cycling performance, thickness of SEI film and gas generation will be demonstrated. It is expected that this study will pave the way for design of carbon electrodes for achieving higher discharge capacity. From preliminary data results obtained so far, B-A-C or C-A-B based negative electrodes have shown much better performance than the remaining four combinations. In the latter cases, the battery loses 80% of the rated capacity before the completion of 1000 cycles, whereas a high discharge capacity, low film thickness and lesser gas is generated after the same number of cycles in the former cases. 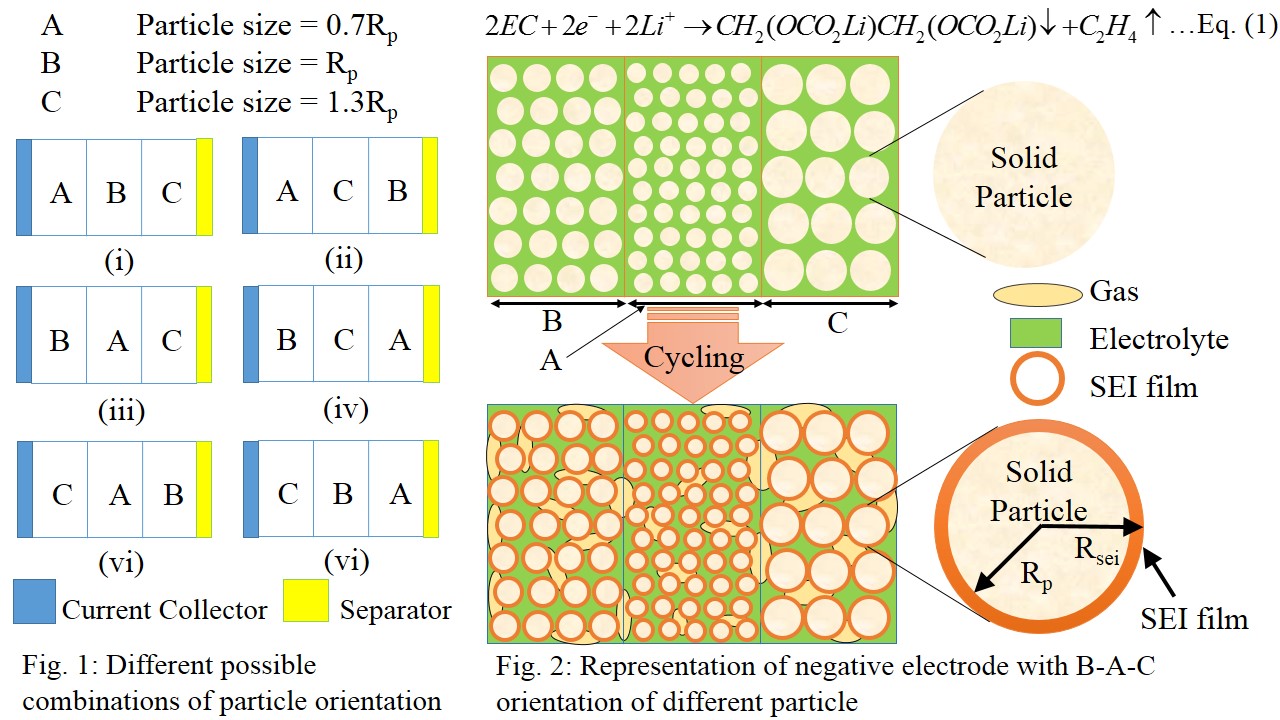