As a result, in 2010 our group developed a supramolecular exTTF-B18C6 ether receptor for fullerenes which showed an extraordinary affinity (Ka 5.01 × 106 M-1) towards [60]fullerene.[3]This was an outstanding result as previous attempts to complex fullerenes by only one unit of exTTF were unsuccessful. Thus, the presence of crown ethers as recognition patterns seemed to be of paramount importance.

In this work, we have further studied this unexpected result and exploited the potentiality of crown ethers as recognition motifs for fullerenes. Therefore, a series of exTTF‑(crown ether)2 receptors, designed to host C60, has been prepared. The size of the crown ether and the nature of the heteroatoms have been systematically changed to fine tune the association constants. Electrochemical measurements and transient absorption spectroscopy assisted in corroborating a charge transfer in the ground state and in the excited state leading to the formation of radical ion pairs featuring lifetimes in the range from 12 to 21 ps. To rationalize the nature of the exTTF-(crown ether)2•C60 stabilizing interactions, theoretical calculations have been carried out, prompting to a synergetic interplay of donor-acceptor, π-π, n-π and CH···π interactions, which is the basis for the affinity of our novel receptors towards C60. 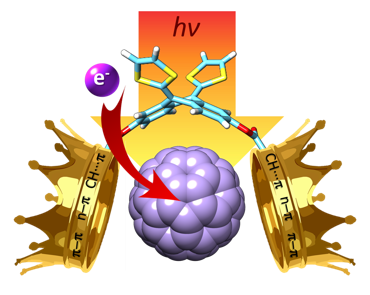