Continental Room C (Hilton Chicago)
R. Chavali, N. S. Gunda (York University), S. Naicker (University of Alberta), and S. Mitra (York University)
The development of rapid, efficient and inexpensive methods for the detection of fluoride in potable water, has been gaining significant attention in the recent years, particularly in the developing countries. Fluoride, which is known to have antimicrobial properties, plays a significant role in human health. Fluoride helps in treating Osteoporosis and also has many beneficial effects in the maintenance of dental health. Fluoride is an additive in most of the toothpastes that are commercially available. Fluoride is also added to drinking water in limited concentrations owing to its properties in preventing and controlling dental Caries. The recommended level of fluoride in drinking water is 1.5 mg/L as directed by the World Health Organization (WHO). However, an increase in fluoride concentration above this level leads to dental and skeletal fluorosis. Excess exposure to fluoride is also known to induce many endocrine effects such as decreased thyroid function and Type II diabetes. Hence, fluoride levels in drinking water have to be regularly monitored and precautions need to be taken to control the increased levels of fluoride in drinking water. In view of the need for a simple cost effective method for the detection of fluoride ion, we considered the unique chemistry of fluoride ion towards the silyl ethers. The highly electronegative fluoride ion has been widely used to remove the silyl protective group from silyl ethers. In order to use this unique character of the reaction, we have synthesized a new water soluble colorless chemical sensor 7-O-tert.Butyldiphenylsilyl-4-methylcoumarin (SiC), which upon interaction with fluoride ions in water, releases fluorescent molecules that impart blue fluorescence to the solution. The blue fluorescence can be observed using simple hand held ultraviolet (UV) lamps. For quantification, the resultant fluorescence can be measured using simple and portable battery operated optical readers. SiC is extremely sensitive to fluoride and our results indicate that fluoride concentrations as low as 1 mmol/L can be accurately detected within a few seconds. This method is quite simple and rapid compared to the conventional methodologies. This method doesn’t warrant any special training and can be used by any unskilled person on site at the source of water and can also be easily incorporated into any multiplexed detection system. 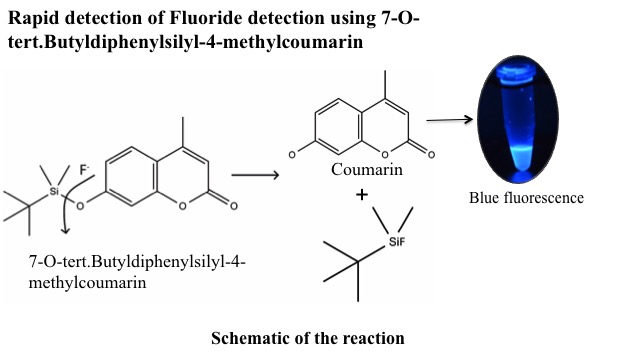